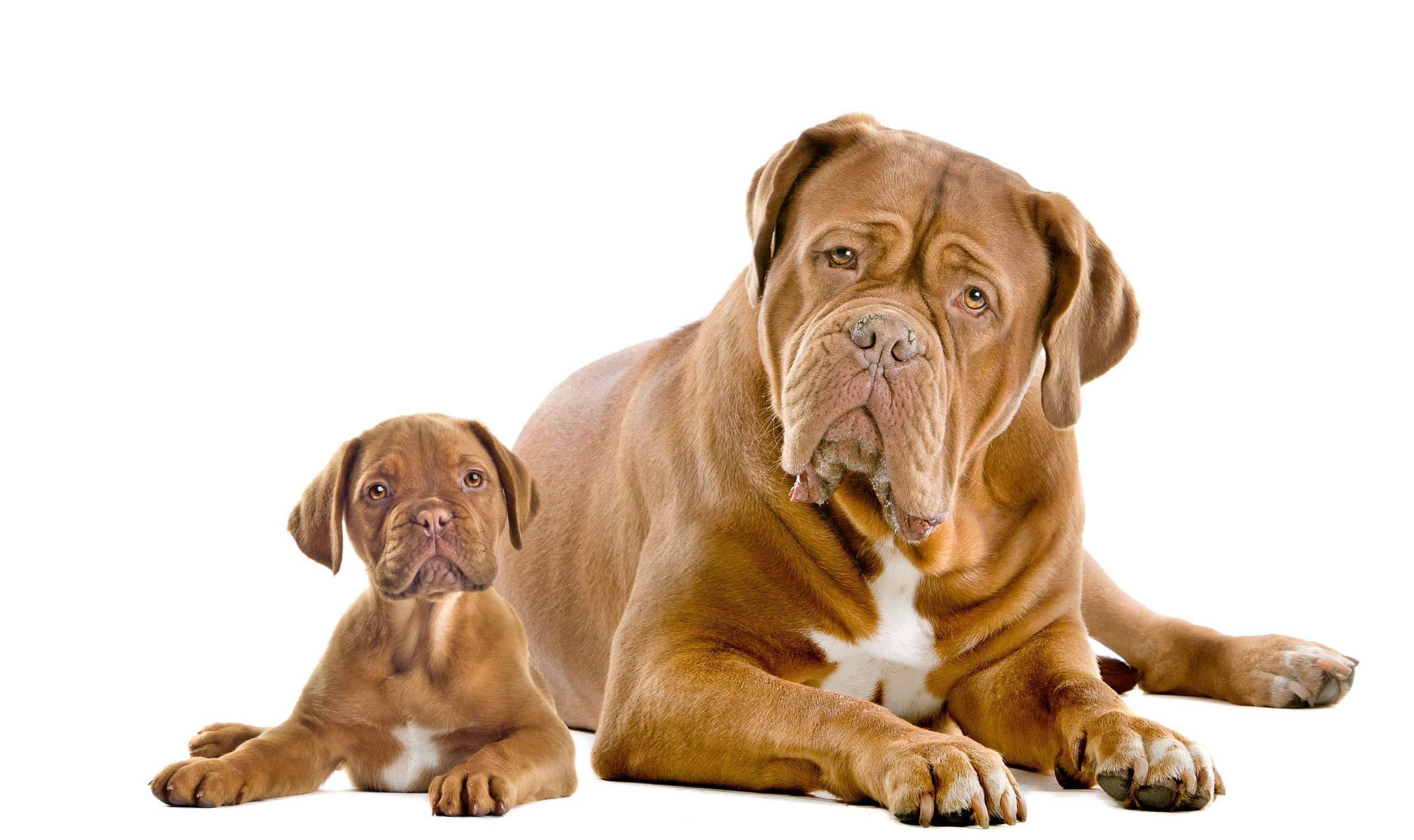 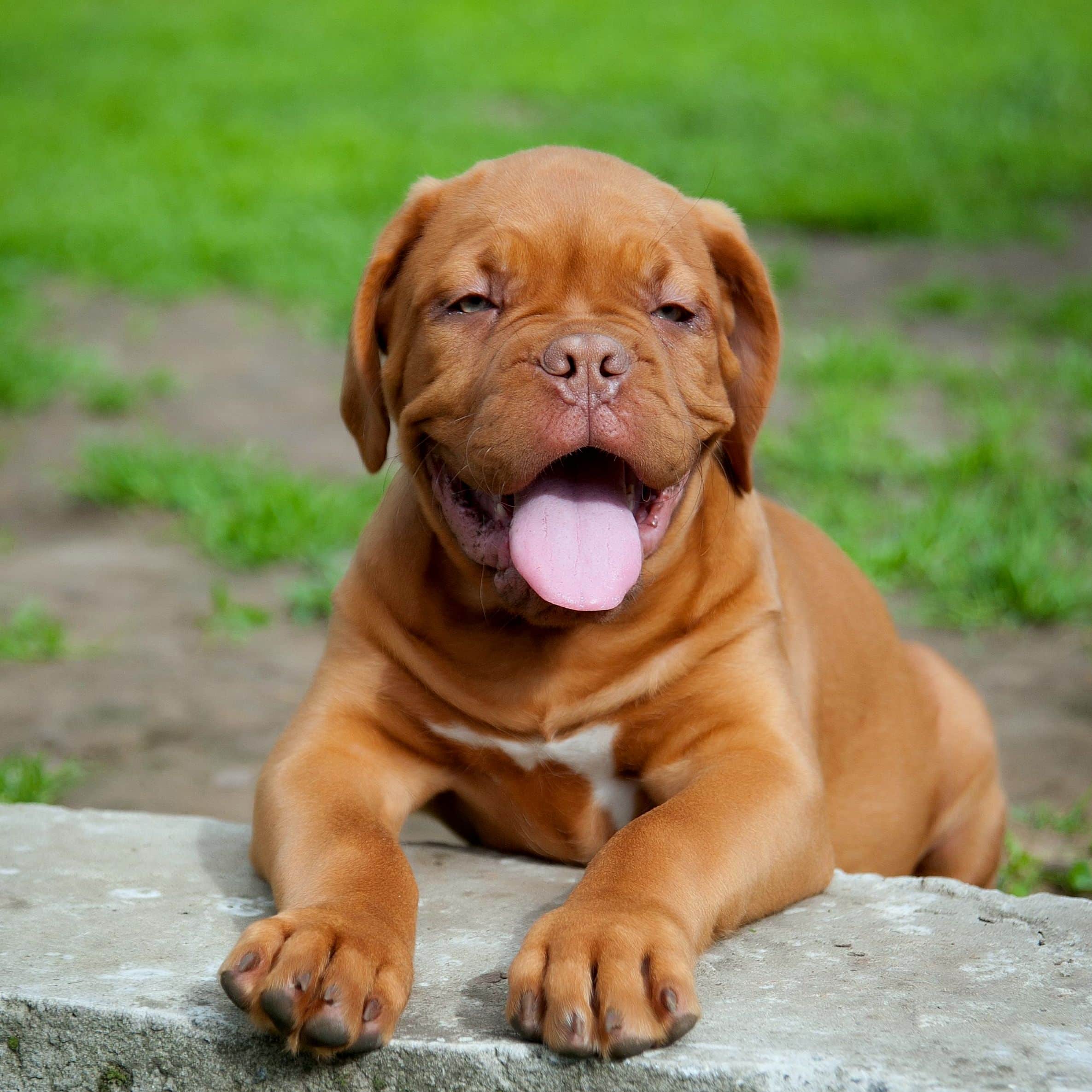 Our French Mastiff/Dogue de Bordeaux puppies for sale are excellent guard dogs and gorgeous companions! They are docile, loving, and affectionate with their family but are protective and will keep their family safe at all costs. Because of this breed’s size, strength, and protective nature, its not recommended for first time dog owners.

Are you looking for a magnificent, loving, and protective guard dog?

Check out our French Mastiff/Dogue de Bordeaux puppies for sale below!

This large, powerful dog is loyal, courageous, and vigilant. The French Mastiff/Dogue de Bordeaux is a docile breed that loves his family deeply and has a gorgeous mahogany coat. However, he has a stubborn streak and needs firm leadership and socialization to become a well behaved dog. This breed is not recommended for first time dog owners.

Protective & Powerful: Historically used as war dogs and guardians of estates, the French Mastiff/Dogue de Bordeaux has a strong protective nature and is very loyal. Socialization and training is essential for this breed, as they can become aggressive if not trained properly. They are large, muscular dogs with an intimidating presence. A glance at this dog will send an intruder quickly on their way.

Droolers: On a less glamorous note, the French Mastiff/Dogue de Bordeaux is a serious drooler. Be prepared with towels and rags to wipe your dog’s mouth, especially after drinking water or exercising.

Affectionate: Don’t let this dog’s strength and size fool you – he has a loving heart when he’s with his family. Don’t keep this dog in a kennel or on a chain – they want to be near their owers at all times.

Low-Energy: The French Mastiff/DDB is a relatively calm, laidback breed. However, they remain vigilant even while napping on sofa.

The French Mastiff/Dogue de Bordeaux originated from the Bordeaux region of France.

The French Mastiif/DDB is a related to the Mastiff, Bullmastiff, Tibetan Mastiff, and Neapolitan Mastiff.

Many people believe the French Mastiff’s ancestors were brought to France by Julius Caesar’s army around BC 1. Romans used Mastiffs as war dogs and to fight other dogs and wild animals in the arena.

The DDB Club of America was formed in 1997, and in 2008 the French Mastiff/DDB was recongnized by the AKC.

Today, the French Mastiff/DDB ranks number 76 out of all breeds registered with AKC.

You can expect your Dogue de Bordeaux, DDB, to live for 5-8 years.

They are a beautiful fawn or mahogany color and can have white, brown, or black markings on their chest or face.

A Dog de Bordeaux/French Mastiff’s coat is short and relatively low-maintenance. They shed year-round. You will want to brush them regularly with a rubber curry brush or a shedding blade to remove loose hair.

French Mastiffs have wrinkles on their faces which can trap moisture and dirt. Use a warm, damp cloth to wash in between the wrinkles every day. Be sure to dry them too thoroughly!

Your dog will also need its nails trimmed, and teeth brushed regularly.

French Mastiffs drool, so you’ll want to keep some cloths nearby to wipe their mouths,  your clothing, or whatever else they may drool on!

First, a word about safety.

Due to their short snout, the Dogue de Bordeaux/French Mastiff can overheat quickly. Please, keep a careful eye on your dog during extreme temperatures.

Since breathing is difficult for them, heavy exercise can be too strenuous for them, especially on hot days. Keep an eye on them carefully during walks and other forms of exercise to make sure they are breathing properly.

One of the most serious health concerns for the French Mastiff/Dogue de Bordeaux is bloat. Bloat, also called gastric dilatation-volvulus or gastric torsion, can affect any large breed dog and is a life-threatening condition.

Like all dog breeds, the Dogue de Bordeaux/French Mastiff are at risk for hip and elbow dysplasia, two of the most common health issues in dogs.

French Mastiffs/Dogue de Bordeaux are moderate to heavy shedders and are not considered an allergen-friendly breed. Allergens can be lowered with regular brushing and bathing.