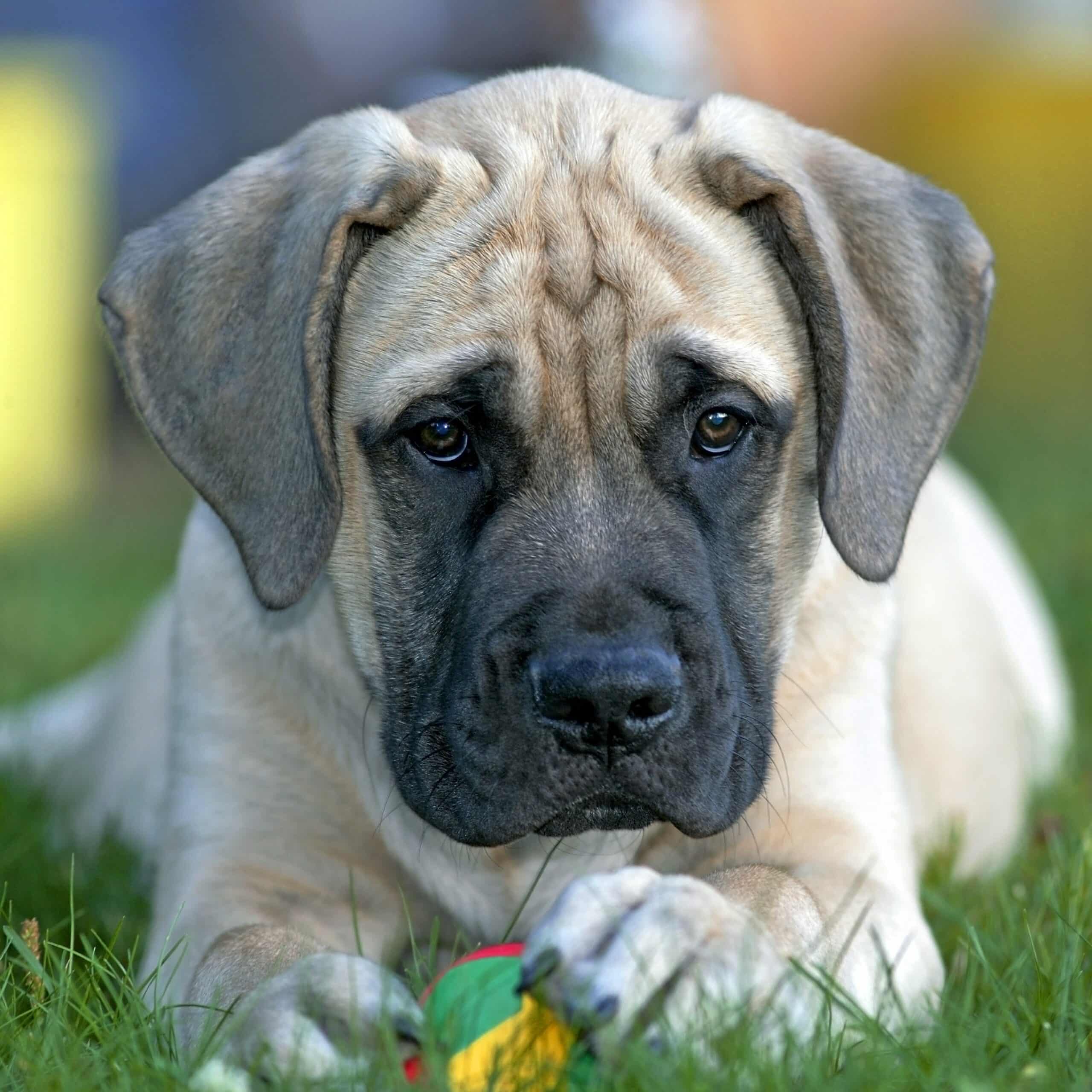 The English Mastiff is one of the most ancient breeds of dogs.  This dog will make a fine companion for anyone who can accommodate its size and doesn?t mind a little drool being slung around.  Our English Mastiff puppies for sale are sure to make a statement in your community and be a good-natured companion to your family.

Are you looking for a courageous yet gentle family guardian?

Check out our English Mastiff puppies for sale below!

The English Mastiff is a loyal, courageous, and protective breed, although they are usually not aggressive. This giant breed can weigh 120-230 pounds and brings a calm, steady presence wherever it goes. They have an affectionate and loving personality with their family!

Good-Natured: Once a fierce war dog and animal-fighter, the English Mastiff we have today is gentle, loving, and good with children.

Excellent Family Guardian: The English Mastiff has strong protective instincts! They are courageous and will stop at nothing to protect their family. Although English Mastiffs are not usually aggressive, they are wary of strange people and dogs. Its import to socialize your puppy while they are young so they learn which situations are normal and which are threats.

Affectionate: That’s right! This fierce-looking guard dog is actually a major cuddler! Your English Mastiff will love nothing more than to lay at your feet, lean against you, and even try to sit in your lap.

Moderate Energy Level: Exercise level is always important when considering a new dog breed! English Mastiffs have moderate exercise needs. If you’re looking for a dog to accompany you on hikes, jogs, or bike trails, please pick another breed. The English Mastiff is known to plop down when he gets tired, and you won’t be carrying him the rest of the way home! Instead, give your Mastiff a few gentle walks each day and some playtime around your home and yard or in the park.

Tremendous Size: We’d be ignoring the elephant in the room if we didn’t mention the English Mastiff’s large size! Owning such a large dog is a large commitment. First of all, training is absolutely essential for English Mastiffs. A 200+ pound dog that jumps up on you isn’t just annoying – it’s dangerous! English Mastiffs also require a lot of food; they eat as much as an adult human. If you live in an apartment, consider how you will move your English Mastiff if he injures himself and is unable to walk. Positives of owning the heaviest dog in the world? The mere sight of him will stop most intruders. This giant breed brings a steady, calm presence wherever he goes.

While the term ‘mastiff’ is sometimes used as a general term for any mastiff breed, including Tibetian Mastiff and Neopolitan Mastiff, the term ‘Mastiff’ (with a capital ‘M’) refers to the traditional Mastiff, sometimes called “The Old English Mastiff.”

The English Mastiff is one of the oldest dog breeds. Mastiff.org shows carved images depicting mastiff-type dogs from Babylon, Sumeria, and Assyria dating back to as far as 2000 BC.

Outside of pictorial evidence, folklore and oral history give us clues. It seems the Phoenicians brought Mastiffs to Britain. Mastiffs were then used by Romans to fight in the area.

Other historical figures who kept Mastiffs include the Kubla Khan, a Mongolian ruler (as described in Marco Polo’s writings), and Hannibal, a Carthaginian leader, who is said to have crossed the Alps with Mastiffs.

Many dogs today have their ancestry from Mastiffs including, St. Bernard, Rottweiler, many types of mountain dogs, Chow Chow, and even the Pug.
Although the Mastiff was used in many countries, it is the British who bred and created our modern-day English Mastiff.

The British kept English Mastiffs as nighttime guard dogs for their castles and estates in the middle ages.

Mastiffs were also used in war and in animal fights up until 1835. In 1835, cruel animal sports were outlawed, and the English Mastiff lost his job.
After this new law, the English Mastiff almost became extinct. However, dog shows became popular during this time, and this helped to keep the English Mastiff bloodline alive. Breeders worked to create a loving, gentle companion instead of a fighting dog.

During World War l and ll, Mastiffs came near extinction again, due to food shortages. A pair of Mastiffs were imported from Canada and helped save the breed.

But when did Mastiffs come to America? Some records show that an English Mastiff was on board the Mayflower with Plymouth colonists.

In 1879 the first Mastiff club was formed in America, and in 1885 the English Mastiff was recognized with the AKC.

The English Mastiff we have today is gentle, affectionate, and docile. They are lovers, not fighters, but they still retain their courageous spirit! Today, English Mastiffs rank number twenty-nine out of all breeds registered with AKC.

The English Mastiffs are big, heavy-boned dogs with wrinkled, black faces. They have short muzzles and hanging ears.

English Mastiffs have black masks, and their coats can be apricot, fawn, or brindle

An English Mastiff’s coat is short and low-maintenance. However, English Mastiffs do shed heavily twice a year. To remove loose hair, you will want to brush and bathe them more regularly during shedding seasons.

English Mastiffs have wrinkles on their faces which can trap moisture and dirt. Use a warm, damp cloth to wash in between the wrinkles every day. Be sure to dry them too thoroughly!

Your dog will also need its nails trimmed and teeth brushed regularly.

English Mastiffs drool, so you’ll want to keep some cloths nearby to wipe their mouths,  your clothing, or whatever else they may drool on!

As a Mastiff owner, it is essential for you to be aware of conditions that may affect your beloved English Mastiff.

Bloat
English Mastiffs are at high risk for bloat. Bloat, also called gastric dilatation-volvulus and gastric torsion, can affect any large breed dog and is a life-threatening condition.
Bloat is when the stomach becomes twisted, and the gases in the stomach are unable to escape. The pressure from these gases affects the blood flow to the heart, and it can be fatal.

Protect Your English Mastiff from Obesity!
You can protect your dog from one of the most common health problems: obesity. One of the best ways to extend your dog’s life is by feeding them the correct amount of food and giving them adequate exercise.

Hip and Elbow Dysplasia
Like all dog breeds, English Mastiffs are at risk for hip and elbow dysplasia, two of the most common health issues in dogs. Hip and elbow dysplasia occurs when the thigh bone doesn’t fit snugly into the hip and can result in limping, lameness, or arthritis if it’s not addressed.

Other conditions that English Mastiffs are susceptible to include:

English Mastiffs are moderate shedders and are not considered an allergen-friendly breed. Regular brushing and bathing can lower allergens.
If you or someone in your home has animal allergy concerns, please consult your health provider before adopting a puppy.