“Very easy and fast experience. Our corgi puppy was delivered one week after purchase. She is a wonderful dog!” – Suzanne J. 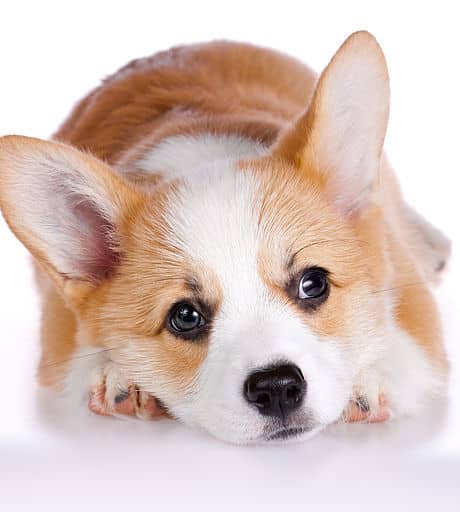 Are you looking for a small dog with family charm, sensitivity to children, a love for energy and activity, and beautiful color markings?

If you want this and much more in a dog, then take a look at our Pembroke Welsh Corgi puppies for sale!

Known for their energy in family activities and herding, their love for activity, and their loyalty; the Corgi may be small, but it sure is mighty! In fact, they are the smallest of the American Kennel Club’s herding group.

If you are looking for a smaller dog for your family, but don’t want to sacrifice the energy or family ties of a larger breed, then purchase your Pembroke Welsh Corgi puppy today!

Looking for more puppy options besides a Corgi? View our full list of puppy breeds for sale here

Happy: Corgis are a fun dog known to have a bright, cheerful personality.  This is especially seen when they interact with families and children.

Intelligent: Corgis are quick to pick up on things, whether it is routine, training, or social activities.  Their herding instinct also makes them quick to learn who their family and tribe are.

Herding: The Corgi breed were originally raised and bred for their herding instincts.  To this day, they love running and being involved in energetic activities, especially when part of a group of their “herd.”

Watchdog: They may be small, but Corgis are known for their watchdog tendencies.  They are known to be fearless if they sense danger, and are quick to use their big bark to alert humans to intruders.

Independent: Although they love socialization, Corgis are known to be more independent than some breeds.  This can especially come through when they are being trained, and at times show a stubborn streak.  For this reason, some find crate training the best way to housebreak their Corgi.

The Pembroke Welsh Corgi has its origin in Wales, as is suggested by its name.

There are several stories in regards to the Corgi’s history and beginnings.

One version of the Corgi’s beginnings is a fairy tale rendition.  It says two children were in the fields with their family’s cattle when they found several puppies.  Thinking they were baby foxes, they brought them home.

Their parents realized they were actually puppies, and they told their children the Corgis were a gift from the fairies.  The parents also said the Corgi’s small size made them the stallion upon which fairies rode, and their white markings around the neck and chest were saddle marks from the fairies.

A more factual version involves a group of weavers in 1107.  Known for their ornate tapestries, these weavers were invited by Henry I of Britain to work for the British crown, and he had them work and live in southeastern Wales.

Along with their tools and skills, these skilled weavers brought their short-legged dogs that they used to herd their cattle and sheep.

A third version says Vikings introduced the Corgi to Wales in the 10th century, and the breed was kept by local farmers due to their herding abilities.

Adult Corgis usually reach 10 to 16 inches tall at the shoulder.

Healthy Corgis weigh 30 to 35 pounds, but be careful:  They love to each, so watch their weight!

Pembroke Welsh Corgis have an average life span of 12 to 14 years.

There are two types of Welsh Corgis:  The Pembroke Welsh and the Cardigan Welsh.

Corgis are known for their color scheme:  They usually have white markings on their legs, belly, chest, muzzle, and neck.

Pembroke Welsh Corgis are double-coated, which means they have a thick undercoat and a longer topcoat.  This means they will have frequent shedding, so regular and proper grooming is important.

It is recommended to groom your Corgi a minimum of several times a week, and preferably daily.

A key to grooming your Corgi is to start when they are a puppy.  If grooming is done consistently as a puppy, it becomes routine to both you and your dog.

Regular baths are not needed due to oils in their skin.  However, if your dog is dirty due to mud or grime, then give it a bath.  Some also find shedding is reduced if baths are given during the peak shedding times.

Most dog breeds love to eat, and Corgis are no exemption!  However, with their smaller body mass and temperament, it is especially important to be aware that your Corgi does not overeat.

It is suggested you feed your Corgi twice a day instead of leaving food out all the time.  This helps prevent your Corgi from overeating.

Because Pembroke Welsh Corgis are double-coated, they shed more than some breeds.  Often they have heavier shedding several times a year.

This tendency to shed should be considered if someone in your family has concerns with pet allergens.

However, proper and regular grooming and cleaning reduce the number of allergens a Corgi releases, especially if you start as a puppy and it becomes routine in your schedule.