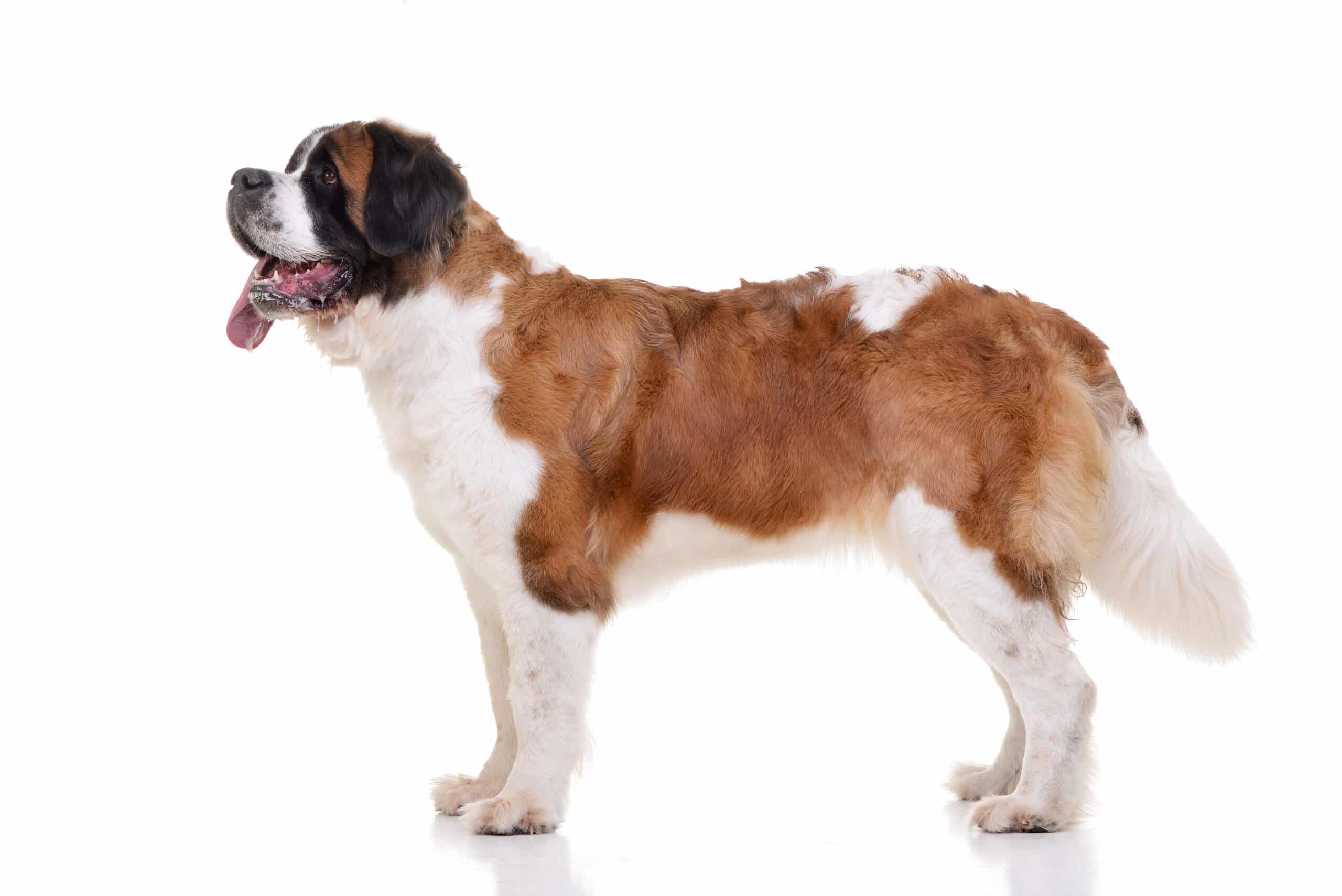 Our Saint Bernard puppies for sale make wonderful family pets and thoroughly enjoy human companionship. They have a steady, laid-back temperament and are gentle with children and other animals. A Saint Bernard?s giant size means there is a lot more of them to love and it also keeps away unwanted intruders.

Take a look at our Saint Bernard puppies for sale and adopt one of these easy-going, loveable gentle giants.

Are you looking for a friendly, patient dog that’s giant-sized?

Check out our Saint Bernard puppies for sale below!

There’s nothing like a huge, laid-back dog that tolerates all the hugs, cuddles, and playing you desire! The Saint Bernard is a patient, calming presence that loves his family and is sure to bring you comfort and laughter.

Adopt your Saint Bernard puppy today and start enjoying the companionship of these steady, loving, and playful giant dogs!

Patient: Saint Bernards are calm, patient, and tolerant. They are excellent family dogs and get along well with children. However, because of their size, they can accidentally knock over small children.

Friendly: Although they may be initially shy with strangers, Saint Bernards usually warm up to newcomers quickly. They love people and are not aggressive.

Not for Clean Freaks: Between drooling, shedding, and muddy paws, these loveable giants can make quite a mess!

Watchdog: Saint Bernard are not big barkers, but they’ll let you know if something isn’t right. In addition to sounding the alarm, a mere glimpse of these giant dogs will deter most unwanted intruders.

Sweet but a little Stubborn: There’s no doubt that Saint Bernards are absolute sweethearts, however, they can be stubborn at times. Be consistent with training and reward with praise and treats. Training a Saint Bernard is absolutely essential, as it’s one of the largest breeds. A 150+ pound dog that pulls on its leash or jumps up on people isn’t just annoying; it can be dangerous!

You’ve probably heard stories about Saint Bernards carrying brandy around their necks to travelers lost in the snow.

While it is true that Saint Bernards helped to find lost travelers buried in snow, the small brandy keg around their neck is a pure legend. The brandy keg was an invention of an 18th-century painter and has since become a symbol of the Saint Bernard.

Saint Bernards were originally farm dogs for farmers in the Swiss Valleys.
There was a hospice in the Alps above, started in 1050 by Bernard of Menthon, and it is thought that the farmers from the valley gave some of their dogs to the monks. The monks put these farm dogs to work as search and rescue dogs finding travelers lost in snowdrifts or avalanches.

The monks bred these dogs and around a century later, the dogs were legendary. Since the monastery was isolated (8,000 feet above sea level), the dogs developed a very distinct look as well as hardiness in cold weather and an even keener sense of smell. At one point the monks bred their dogs with Newfoundlands to improve their coats. However, the long hair simply became matted and frozen with snow and ice. The monks stuck with the short-haired dogs.

Although these dogs, along with the Saint Bernard hospice, were well known, they didn’t have an official name until 1833. The breed was many different names including Sacred Dogs, Alpendogs, and Barryhunden.

Charles Dickens mentioned the Saint Bernard Hospice and the work there in the book Little Dorrit, published in the mid 1800s.

The hospice records reveal that their dogs saved over 2,000 lives in the three centuries of records.

In 1833, the name Saint Bernard was decided upon as the official name for this courageous, yet gentle breed. In 1880 the Swiss Kennel Club recognized the breed, and in 1887 the International Congress of Zurich created the official breed standard for the Saint Bernard we know today.

You may have heard about the most famous Saint Bernard: Barry. Barry is said to have rescued the lives of forty people and is one of the most famous dogs in the world. Barry’s body is preserved by taxidermy in a museum in Bern. Disney produced a movie about Barry in 1977 called Barry of the Great Saint Bernard.

The Saint Bernard was recognized as a breed by the AKC in 1885 and today ranks forty-eight out of the breeds registered with the AKC. There are still Saint Bernards at the Saint Bernard Hospice. They no longer do search and rescue work but serve as living reminders of the heroic work done by their ancestors.

As with any large breed, a Saint Bernard will need more space, more dog food, larger medication dosages, etc., than other dog breeds. Please consider the space, cost, and time required to care for a Saint Bernard before adopting!

As a member of the Mastiff family, Saint Bernards have huge heads, wrinkled brows, and short muzzles.

There are two types of coats within the Saint Bernard breed: long-haired and short-haired.

Saint Bernards have two-color coats, with one of the colors always being white. They can be brown, red, orange, black, or brindle with white.

Whether they have a short coat or a long coat, Saint Bernards will need their coats brushed weekly. During seasons of heavy shedding, they will need to be brushed daily.

Saint Bernards only need to be bathed occasionally or when they get dirty.

Your Saint Bernard will also need its nails trimmed and teeth brushed regularly.

Here are some health conditions that may affect your Saint Bernard.

As a giant breed, Saint Bernards are especially at risk for hip and elbow dysplasia.

Hip and elbow dysplasia occurs when the thigh bone doesn’t fit snugly into the hip and can result in arthritis or lameness if it’s not addressed.

Here are some ways to prevent Hip Dysplasia in your Saint Bernard puppy:

Saint Bernards have thick double coats and are not considered an allergen-friendly breed. Regular brushing and bathing can help to lower allergens.