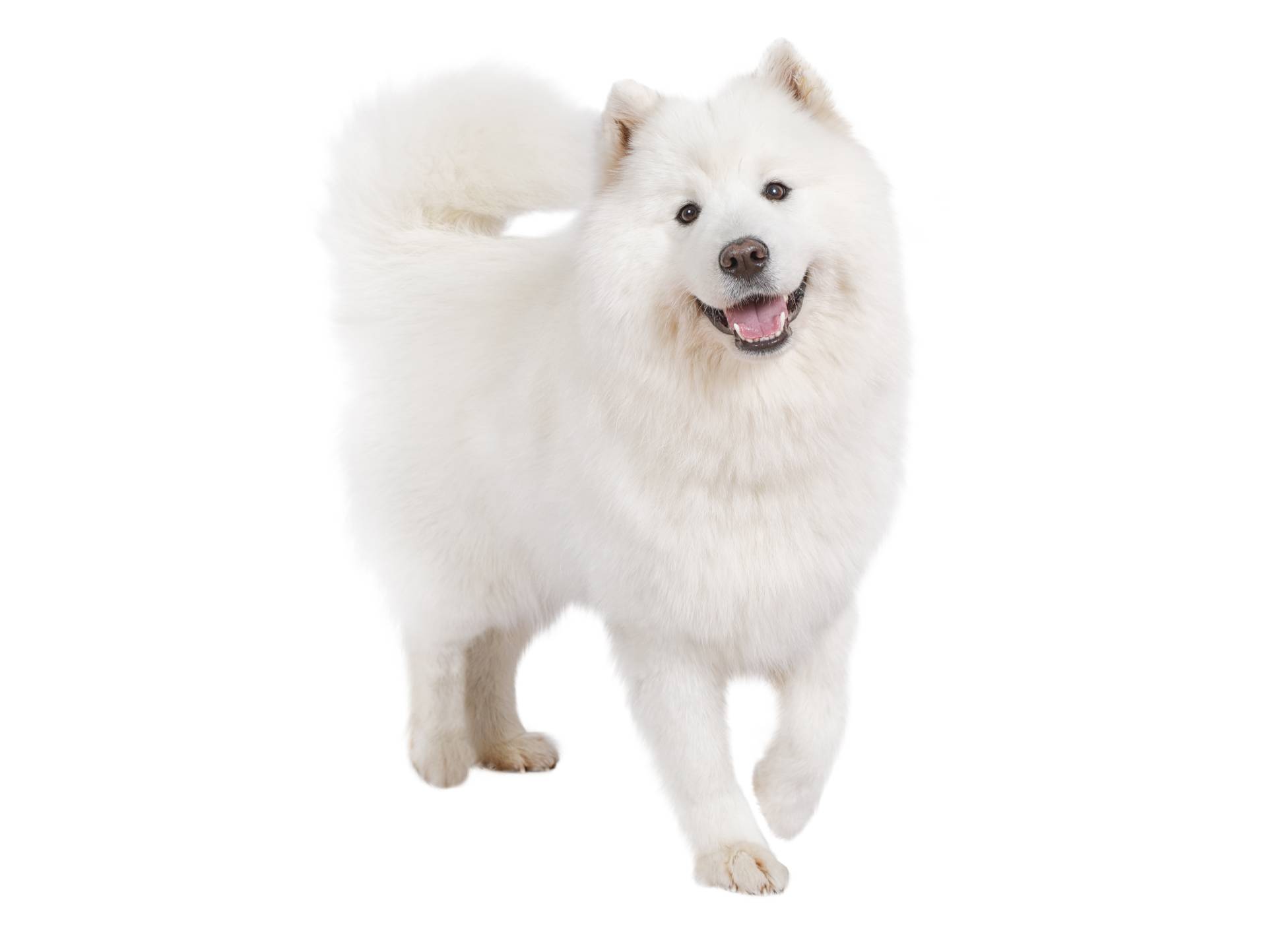 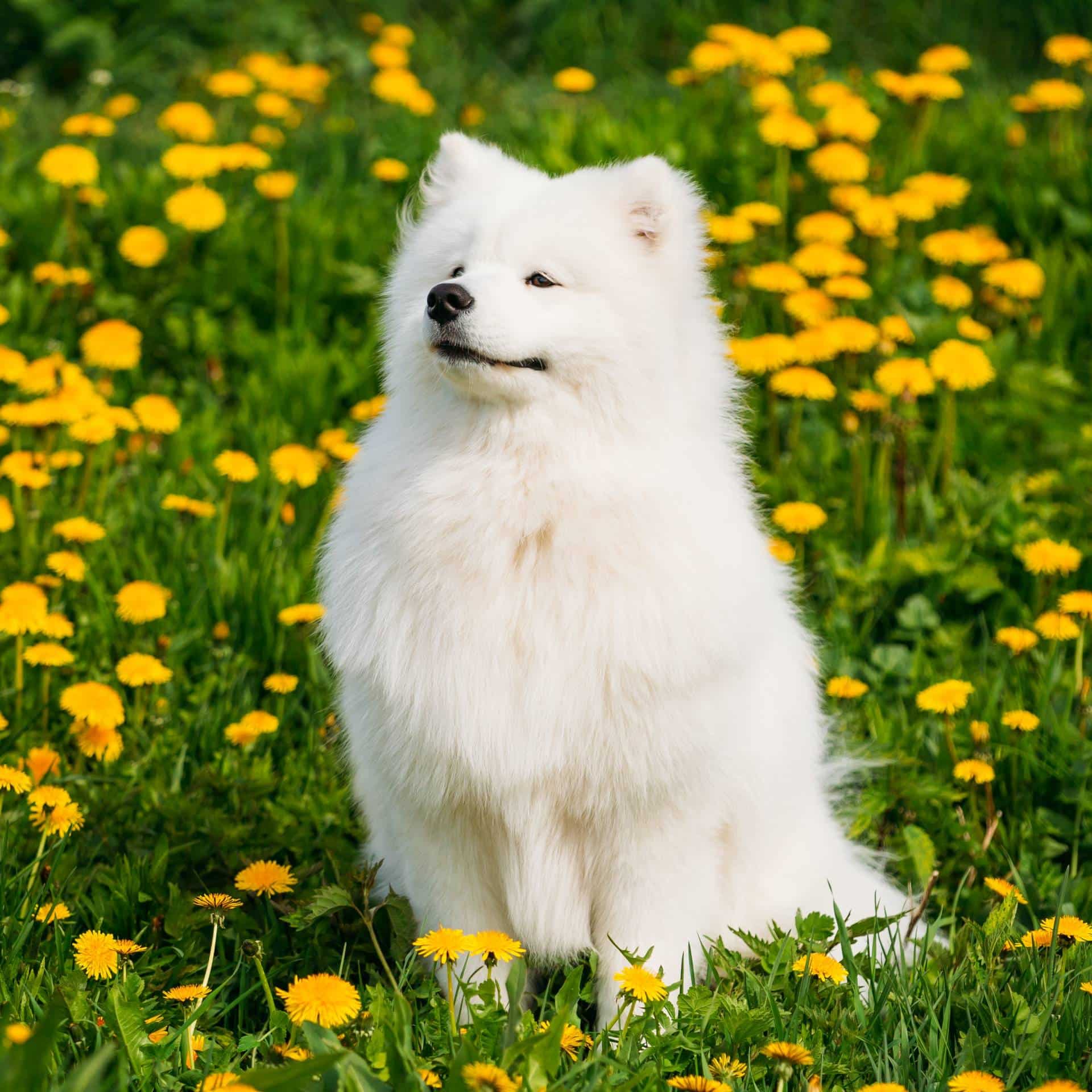 Samoyed puppies are one of the most beautiful dogs around and come with a friendly and playful attitude.  Bred and designed to work hard and well in cold climates, Samoyed dogs have a fluffy, white coat and love being active and useful in the family.  Our Samoyed puppies for sale will bring beauty, laughter, and life into your home!

Are you looking for a dog that has a beautiful white coat, is gentle and loyal to your family, and is not afraid to work hard and be active?

If this is what you want in your next dog, then browse our available Samoyed puppies for sale below!

The Samoyed breed, also called the “Smiling Sammies” because of the upturned corners of their mouths, is a cheerful breed that is not afraid to work hard in harsh climates. With their gentle attitude, high intelligence, and family loyalty, the Samoyed is an excellent addition to any family.

If your family is ready for the newest beautiful addition to your family, then purchase your Samoyed puppy today, or browse our other puppies for sale!

Adaptable: The Samoyed can adapt to a variety of homes, weather, and temperatures. While they do tend to bark more than some breeds, they can be trained to be patient and wait if things are not ideal for them.

Friendly: Samoyeds love interacting and being with people. While they are alert and will sense a stranger, they are not afraid to interact with the stranger and be friendly with them.

Gentle: The Samoyed breed does well with being kind to humans, particularly children. While they are a physically strong breed, they won’t usually run over humans and will quickly form a strong human bond.

Active: The Samoyed doesn’t like sitting still too long, and they are always looking for something to do. Make sure you give your Samoyed plenty of activity and exercise, or he will start coming up with his own version of fun which can result in destructive behavior.

Powerful: Samoyeds were bred to work hard in harsh climates, and this carries on with the breed today. Many of them can pull 1.5 times their weight on a sled. They are not afraid to work hard and long; in fact, they usually welcome this!

The Samoyed breed gets its name from the Samoyede people, a tribe of semi-nomadic people who live in Asia and Siberia.  Wanting a dog that could resist cold temperatures and work hard, the tribe bred dogs for work in cold regions.

It is thought they were used for hunting reindeer and other animals at one time, but this changed over time.  The Samoyed dogs were eventually used to pull sleds on the snow and watch over flocks and herds of animals.

When European adventurers made voyages to the Arctic regions in the 18th century, they discovered the breed and began bringing them back to England.  The breed gained popularity because of its beautiful white coat, as well as its ability to pull sleds in cold temperatures.

Europeans eventually began using Samoyed to pull sleds in the snow on other Arctic explorations, including Scott, Shackleton, and Amundsen.

In 1906, the first Samoyed was registered by the American Kennel Club.

Most adult Samoyed dogs stand around 19-24″ tall at the shoulder and weigh between 35-65 pounds.

Most Samoyed dogs live between 12-14 years.

The Samoyed breed is known for its beautiful, fluffy, white coat. Their coat has a soft, thick undercoat which is covered by a longer and coarser outer layer.

They are also known for their perpetual smile caused by the upturned corners of their mouths.

Because of their double-layered coat with thick hair, Samoyeds do shed a lot.  During shedding season, which usually occurs a couple of times a year, they shed unusually large amounts of hair.

The coarser hair is also prime for tangles and mats, so regular grooming is important to remove loose hair and tangles.

It is recommended to daily brush a Samoyed dog if he is in a shedding stage.  Otherwise, they should be brushed several times a week.

Samoyed dogs are typically healthy without a lot of excessive health problems.  However, an owner should always be watching for unusual signs or ailments in their Samoyed puppy or dog.

With their longer outer coat and annual shedding times, Samoyeds are not the best dog if allergies are a concern.  However, it is important to know what causes allergies in the first place.

Allergens are caused by dander, which is dead skin cells.  Any animal, including humans, shed these dead cells.

Regular grooming helps reduce the allergens in a Samoyed dog, but if allergens are a concern, it is always good to consult with your family physician.