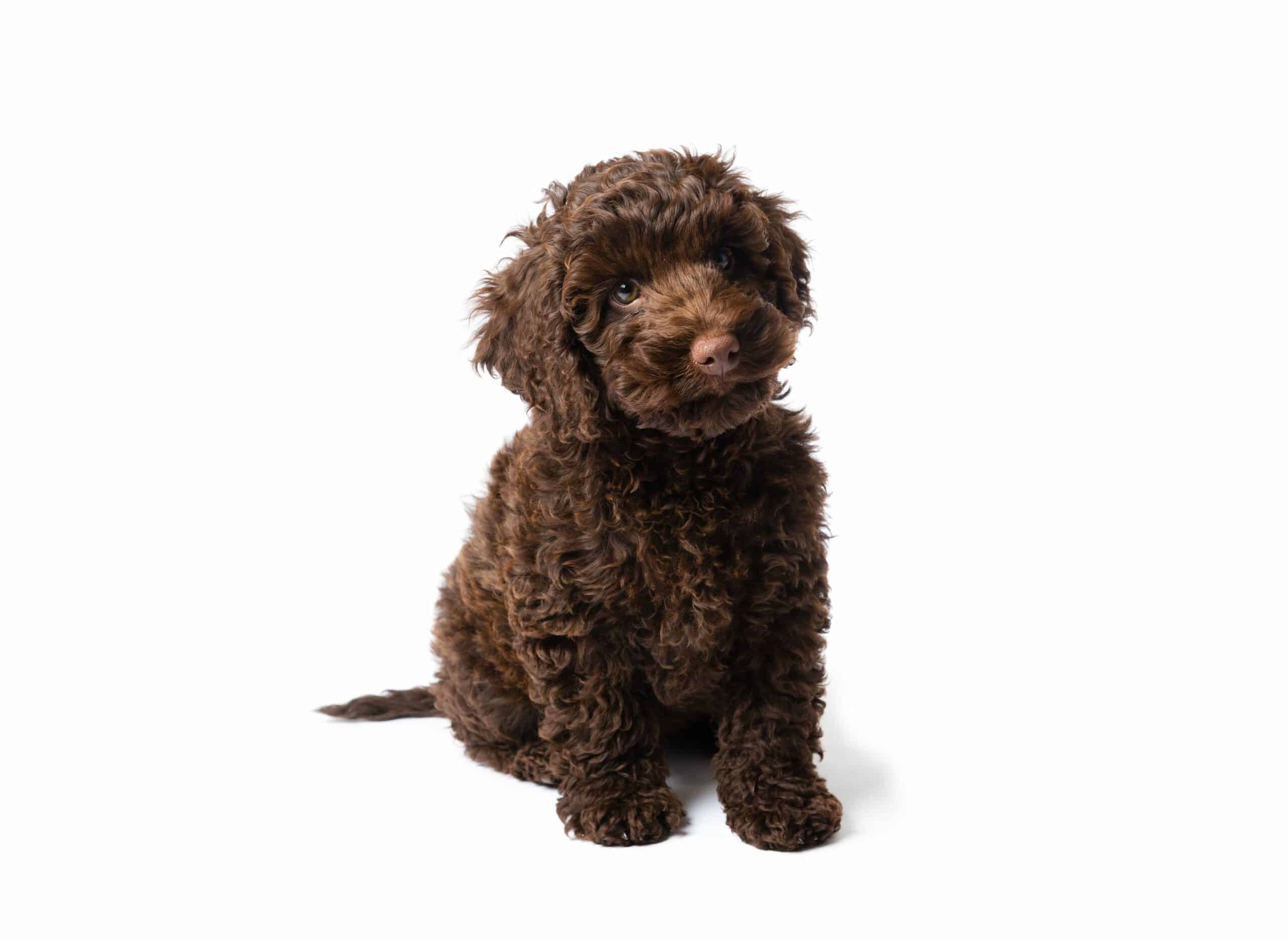 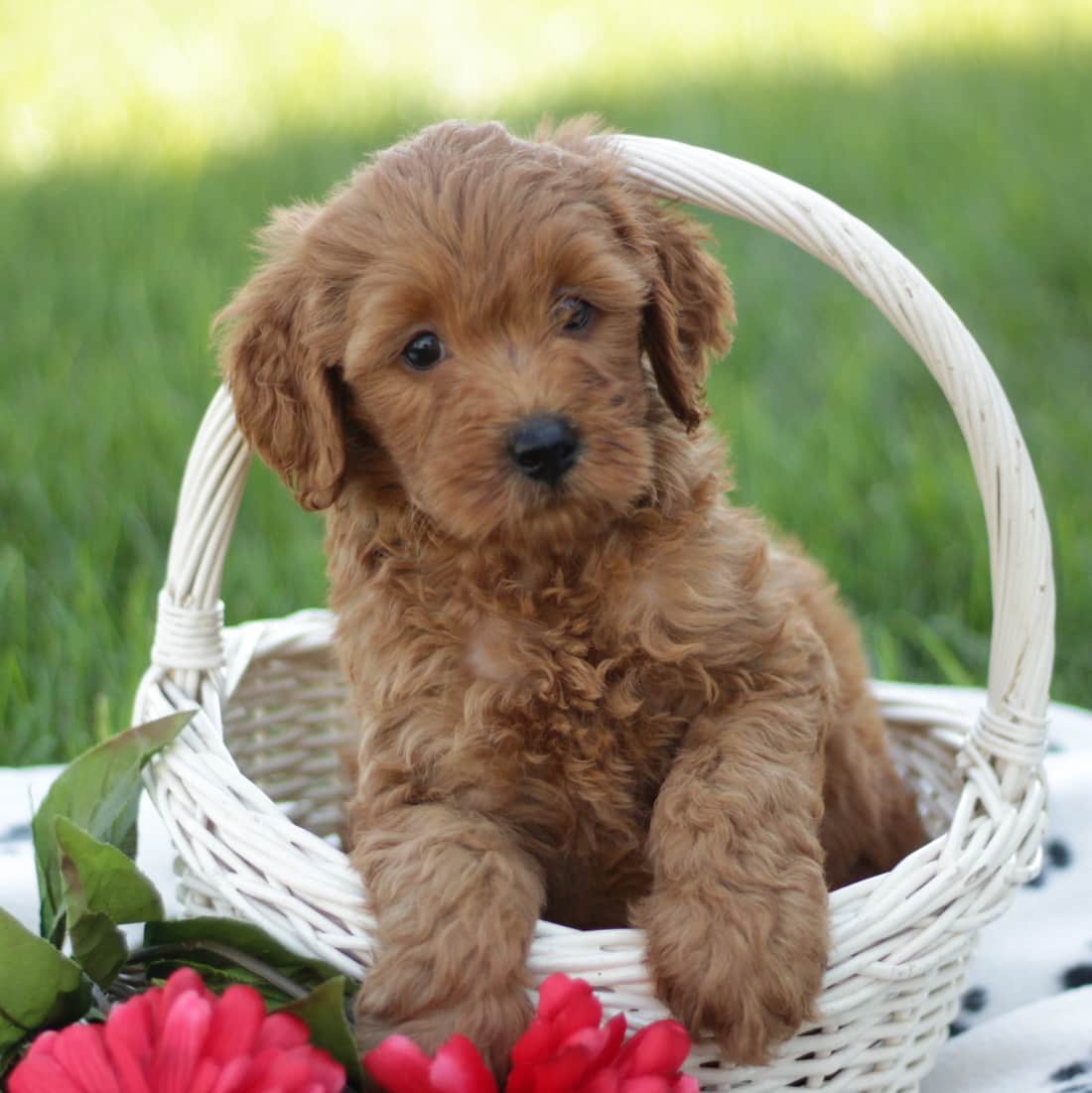 Are you looking for a dog that has a Labrador Retriever’s friendly attitude and playfulness, a Poodle’s lower allergy levels, and won’t take a lot of space in your home?

If that describes your perfect combination in a puppy, then look at our Mini Labradoodle puppies for sale below!

Known as a designer crossbreed because they are a cross between a Poodle and a Labrador Retriever, Mini Labradoodle puppies combine the best of both breeds while remaining a small size.

From the Labrador Retriever, Mini Labradoodle puppies have a friendly, loyal attitude, and they are great with children! From the Poodle side, they have intelligence and hypoallergenic traits.

You can also view our Standard Labradoodle puppies or other available puppy breeds for sale.

Family-oriented: Miniature Labradoodle puppies are a great addition to any family! Their sensitive yet playful attitude makes them wonderful companions for children. They always love being part of family activities!

Cheerful: Known for their friendly, positive attitude, Mini Labradoodles rarely have a bad day. As long as they are with the people they know and love, they will usually be content.

Intelligent: Mini Labradoodles are bright and relatively easy to train. Their intelligence will sometimes get them into trouble if they become bored, but with proper training, they can be taught almost anything in the home.

Playful: Even though they are small, Miniature Labradoodles still love to play, and they require regular exercise. However, their smaller size does make them more adaptable to smaller homes and apartments.

Companionship: Similar to Labrador Retrievers, Mini Labradoodles love spending time with humans, even if they are strangers. They don’t enjoy being alone for long periods of time and want to be a part of the action. They don’t make great watchdogs because of their friendly attitude and small size.

Like many of the Poodle designer breeds, Miniature Labradoodles are a relatively new breed.

Initially bred in Australia in 1989, the purpose of the overall Labradoodle breed was to have a guide dog that would also by hypoallergenic.  When the first crossbreed was successful, more Labradoodles were bred and trained as guide dogs.

Since then, the crossbreed is becoming more and more popular among families for its friendliness, intelligence, and hypoallergenic coats.

Because they are a crossbreed, each Mini Labradoodle puppy will have a unique coat.  Some will show more Labrador Retriever tendencies, and some will have more Poodle tendencies.

Overall, most Labradoodles resemble a mix between the two parent breeds and will have a mixture of loose curls with a shaggy undercoat.

While Miniature Labradoodle’s coats will vary, they do seem to favor the Poodle side with their coats.  However, this does not mean they require little or no grooming.

The coat length should be in the 4-6″ range.  The number of trimmings required to maintain this length will vary on your Labradoodle’s coat.

Miniature Labradoodles should be brushed a minimum of several times a week.  For Labradoodles that have a shaggier undercoat, brushing will be required more often to keep the dog clean and allergens lower.

Because the breed is still very young, there are not a lot of specifics known with Mini Labradoodle’s health.  However, most agree that the breed is healthy, and currently there are no major health concerns with the breed that are not also relevant to Labrador Retrievers or Poodles.

Some argue that designer breeds reduce the health concerns of the parent breeds, but this will take more time and research to be proven.

Due to their floppy ears, you will want to check regularly behind the ears for infection.  To prevent infection, make sure the ears completely dry out whenever your Labradoodle becomes wet.

Like all dogs, Mini Labradoodles are susceptible to hip and elbow dysplasia, especially with their smaller size.

Because of Mini Labroodle’s small size, you should teach children how to handle the dog carefully and be gentle with it during play.

With Poodles being used in the breeding, many make the false assumption that Mini Labradoodles are automatically allergen-free.

Allergens are caused by dander, which is dead skin cells.  Any animal, including humans, shed these dead skills. While Mini Labradoodles typically shed less than Labrador Retrievers, this does not eliminate dander or allergens.

As we mentioned before, Mini Labradoodle’s coats will vary from puppy to puppy, and this affects the allergen level of each dog.