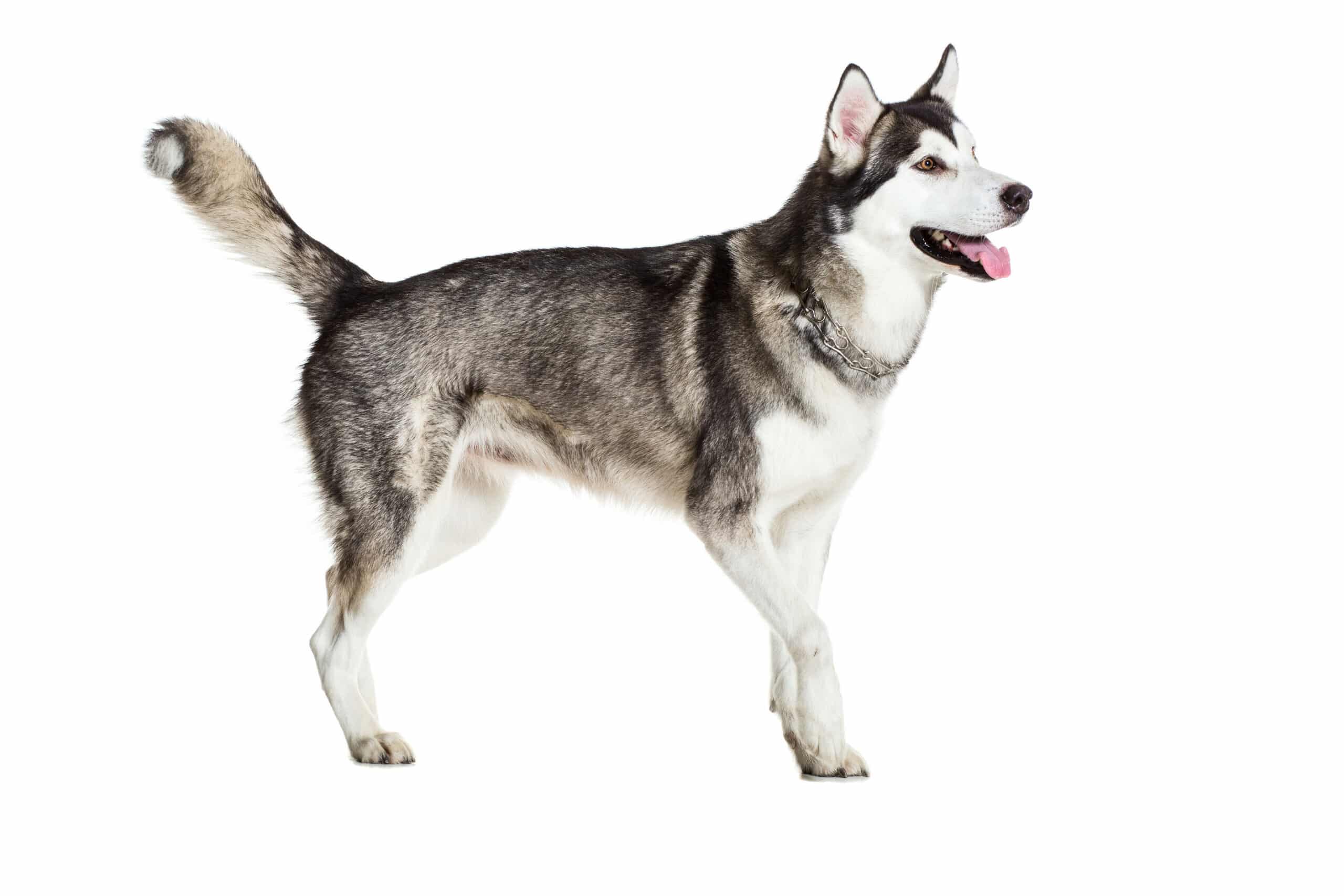 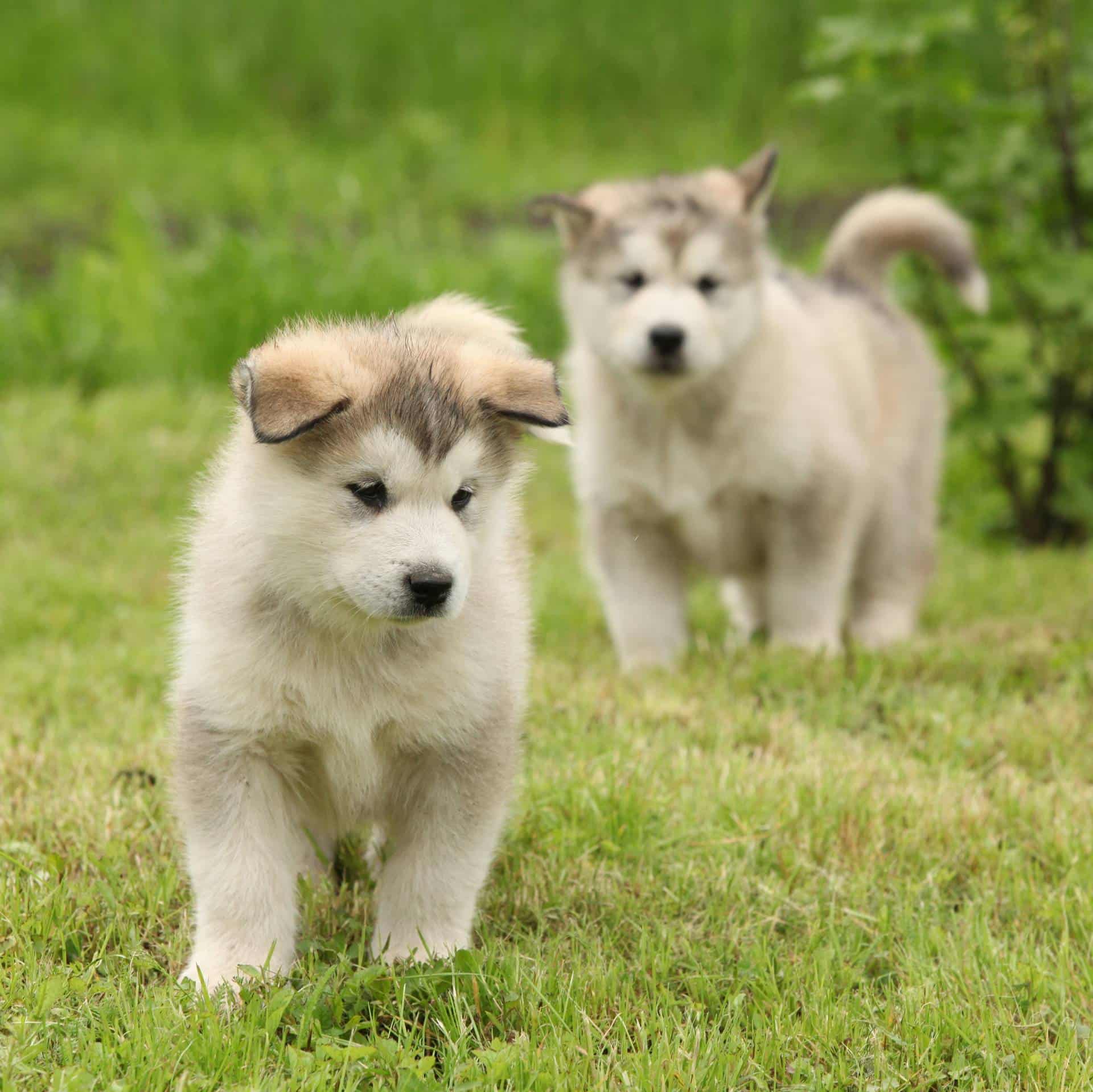 Formally used as a sled dog, the Alaskan Malamute is a large working dog with beautiful coloring and a strong build.  They are highly intelligent and loyal.  Our Alaskan Malamute puppies for sale are friendly, affectionate, and certain to make a wonderful family pet.

And if an Alaskan Malamute isn’t for you, make sure to check out the rest of our puppies for sale.

Are you looking for a distinct-looking dog with beautiful features, plenty of energy and stamina, and a lover of humans and action?

If this describes the dog you want, browse our Alaskan Malamute puppies for sale below!

Although they have a wolf-like appearance, this is a friendly and affectionate breed that loves spending time with humans and other animals.

If you have the room for the dog to run and exercise, our Alaskan Malamute puppies make an excellent addition to any family!

Loyal: Alaskan Malamutes were bred and designed as sled and pack dogs, and they remain faithful to the pack. Whether it is their owners or other animals they know well, the breed is known for its loyalty and dedication.

Affectionate: Don?t let the wolf-like appearance fool you – this breed loves to play and have fun! They are known to enjoy any human interaction, including strangers. For this reason, the breed does not make a guard dog, even if their body may appear intimidating at first.

Powerful: Their body may be lean, but it is built on muscle and athleticism. Alaskan Malamutes are hard workers, have good stamina, and are not afraid of tasks that take work and energy.

Curious: The breed is intelligent and curious, and they can get into trouble if left alone or not given the proper exercise. Consistent and early training is essential to help Alaskan Malamutes learn what is acceptable and allowed in your home and family.

Active: Alaskan Malamute dogs should have plenty of room to run and have daily exercise. If not given the proper exercise, they tend to put their pent-up energy into more destructive activities. If you want a companion for jogging, biking, playing frisbee, or other outdoor activities, then you will thrive with this breed!

The Alaskan Malamute is one of the oldest dog breeds coming from the Arctic region. It is thought their origin came from domesticated wolfs several thousand years ago.

Most likely originating in the Siberian Tundra, the breed came to Alaska when native people crossed the Bering Strait and arrived in North America.

The name comes from the Mahlemiut tribe who used the dog as a sled dog, hunter for seals, and protector against polar bears and other Arctic predators.

With their powerful, muscular build, the Alaskan Malamute is ideal for pulling heavy loads for long stretches in the cold.

The breed saw a decline in numbers during World War 2, but today their numbers are growing with their growing popularity as an affectionate breed.

Adult Alaskan Malamutes are often 22-25 inches tall at the shoulder.  As a muscular breed, they weigh between 75 and 85 pounds as adults.

With an expected lifespan of 10-15 years, Alaskan Malamutes have an average lifespan for most dogs.

With their wolf ancestry, Alaskan Malamutes have a distinct wolf-like build.  Their bodies are beautiful and muscular, and their eyes are usually almond-shaped.

Their coats are typically two-toned – a white base with red, black, gray, or sable (brown) markings.

Alaskan Malamutes have a double-coat designed to withstand the cold and water.

The undercoat is dense, oily, and woolly.  The overcoat is thick, coarse, and usually short.

Even though their hair is not usually long, Alaskan Malamutes still need regular brushing and grooming.  If not groomed properly, their thick double-coat becomes dirty and knotted.

The Alaskan Malamute breed is generally healthy, and adults can usually remain healthy as long as they receive a daily 30-60 minutes of exercise and don?t become overweight.

Make sure your dog does not over-eat.  With their body shape and need for daily exercise, it is essential to their health that the body remains trim and in good condition.

One thing to watch for as they age is ailments in the eye, such as cataracts.  Thankfully, this can sometimes be addressed with surgery.  As your dog ages, watch for cloudiness or a lack of vision in their regular activity.

With their love to run, even the adults should have minimal running on pavement and concrete, and instead have access to yards, parks, and other softer terrain.

With their thick hair and strong shedding seasons, Alaskan Malamutes are not a breed known for being allergen-friendly.

Allergens are caused by dander, which is dead skin cells.  Any animal, including humans, are capable of shedding these dead cells.  While regular grooming helps reduce the loose hair (and therefore dander) from Alaskan Malamutes, they still produce many allergens.

If you have someone in your home with animal allergy concerns, it is good to consult your family physician before buying an Alaskan Malamute puppy.