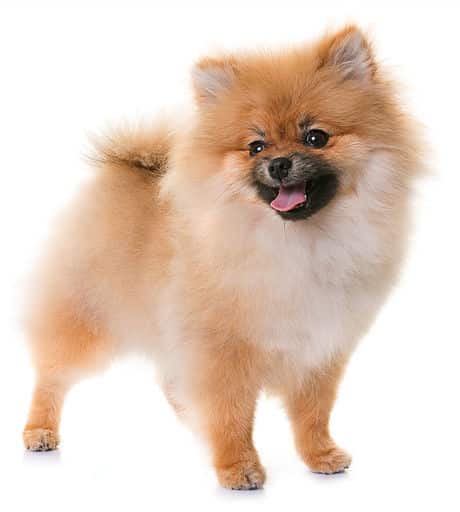 Are you looking for a tiny dog with a big heart? Do you want a family pet that is easily trained, loves human interaction, and has a beautiful coat with color?

If this is what you want in a dog, then check out our Pomeranian puppies for sale!

Known to be one of the smallest dog breeds, Pomeranian dogs are popular for the way they interact with children, master tricks and games with their intelligence, and their thorough love for humans.

If you are looking for a small dog but don’t want to give up any “big dog” heart or character, then purchase your Pomeranian puppy today!

Lively:  Pomeranian dogs are active and love to play and interact with humans.  They do well with children, but caution needs to be taken due to their small size.  They can easily be exercised both indoors and outdoors.

Intelligent:  They are an intelligent breed and can be taught most things quickly and easily.  They are especially known for their love of learning tricks and playing games.

Inquisitive:  Pomeranians are an independent, outgoing breed.  Even though they are small, they are very curious about their surroundings and new things that appear.

Bold:  They may be small, but they don’t let that fact get in the way!  Sometimes called “the little dog who thinks he can,” the Pomeranian breed does not let their small size intimidate themselves.

Alert:  Pomeranians are very alert and sensitive when it comes to new surroundings or unusual events.  They have a loud bark and make excellent watchdogs, even if they are not as dangerous as larger dogs.

The Pomeranian breed has its roots in the region of Northern Europe, close to the Baltic Sea, called Pomerania.  The breed is the smallest cousin to the larger Spitz breeds used as sled dogs in the Arctic.

Several hundred years ago, the Pomeranian was developed from these larger sled dogs, and the breed continued to evolve until it became the small size that it is today.

Queen Victoria from England is often credited as making the Pomeranian breed famous.  While visiting Europe in 1888, she saw a Pomeranian dog and fell in love with it. After bringing one back to England with her, the popularity of the breed significantly increased.

In fact, it is reported that her favorite Pomeranian, Turi, was present at Queen Victoria’s bedside when she died in 1901.

The United States fell in love with Pomeranian soon after England did, and the first Pomeranian specialty show was held in 1911.

Pomeranians are one of the smallest dog breeds.

They reach 6-8 inches at the shoulder, and the average weight is 3-7 pounds.

Pomeranians have an average life span of 12-16 years, one of the longer lifespans for dog breeds.

The Pomeranian breed is known for its two distinctive physical features.

First, its face has a distinctive foxy look.

Second, they have a double coat with a frill that extends over the chest and shoulders.

Pomeranians come in almost two dozen colors, and each dog has unique patterns and markings. The most common variation is an orange or red coat with white and black markings.

The Pomeranian’s distinct look is its full, lush coat.  However, because it is a thick double coat, it does require more care than some breeds.  Thankfully the dog’s small size makes grooming relatively easy.

The coat should be brushed daily with a pin brush, and also brushed weekly with a slicker brush.  Without hurting the dog, make sure you are able to brush down to the skin with the slicker brush.

The Pomeranian breed is an overall healthy breed.  In fact, one of the biggest concerns with the Pomeranian is its small size.

Because it is so tiny but loves human interaction, it can be easy for small children to harm Pomeranian dogs.  If you have small children, it is important to teach them how to interact safely with the dog. It is also good to monitor closely the first several times your child interacts with your Pomeranian.

Pomeranians are an interesting breed when it comes to discussing allergens.  Their thick double-coat does release a lot of hair, but because they are so small, they don’t release a lot of loose hair IF they are brushed daily.

However, it is also important to understand what causes allergens in the first place.

It is important to know if you have someone in your household who has a concern with pet allergens.  While daily grooming helps, there are also some medications that can help prevent allergic reactions to pet dander.

Either way, regular grooming and cleaning reduce the allergens that your Pomeranian releases, especially if you start as a puppy and it becomes a routine in your schedule.