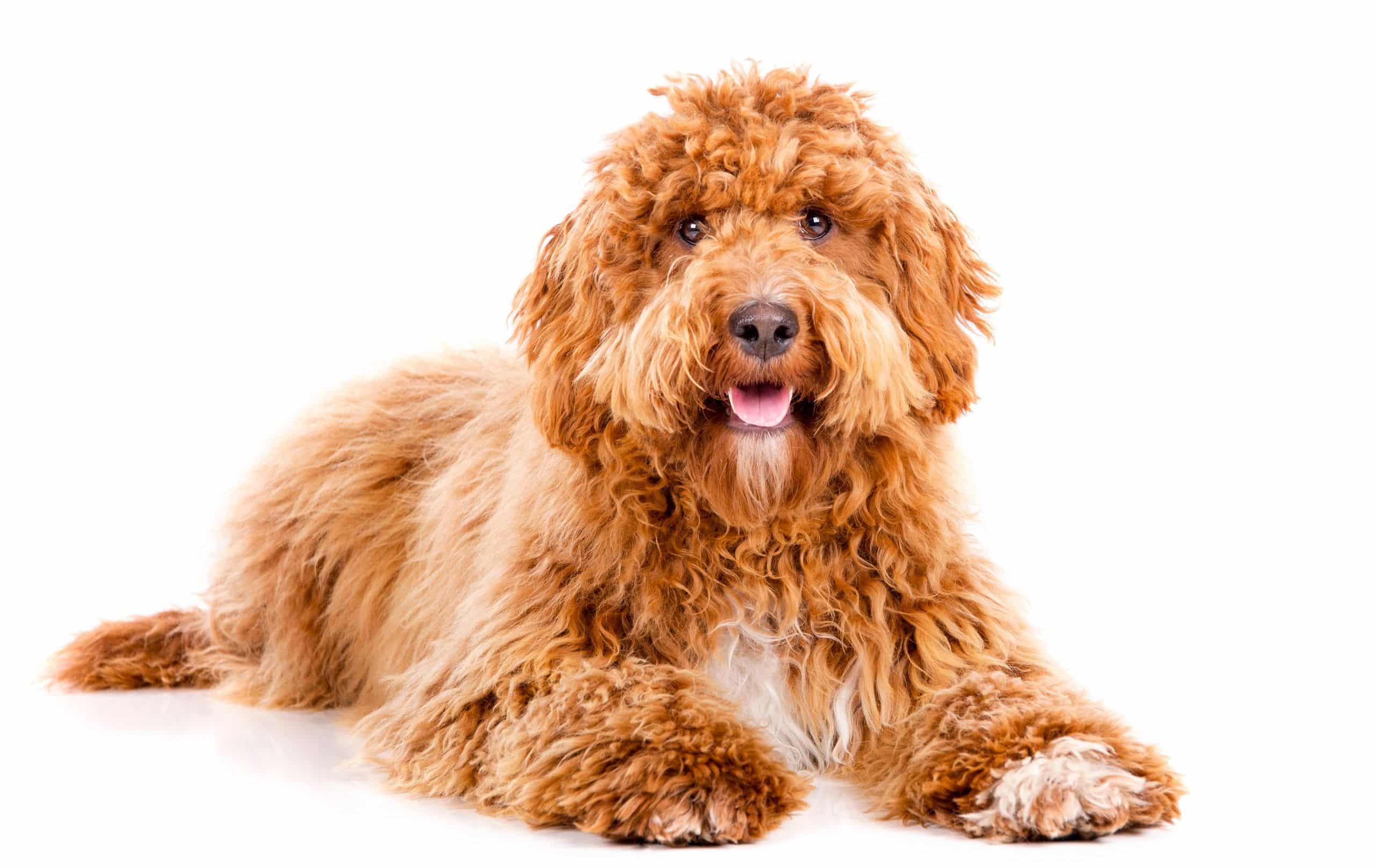 “Was leery never used this kind of service before . The breeder we got our Irish Doodle from were great to work with and our puppy is just perfect ! Highly recommend!” – Kandace D. 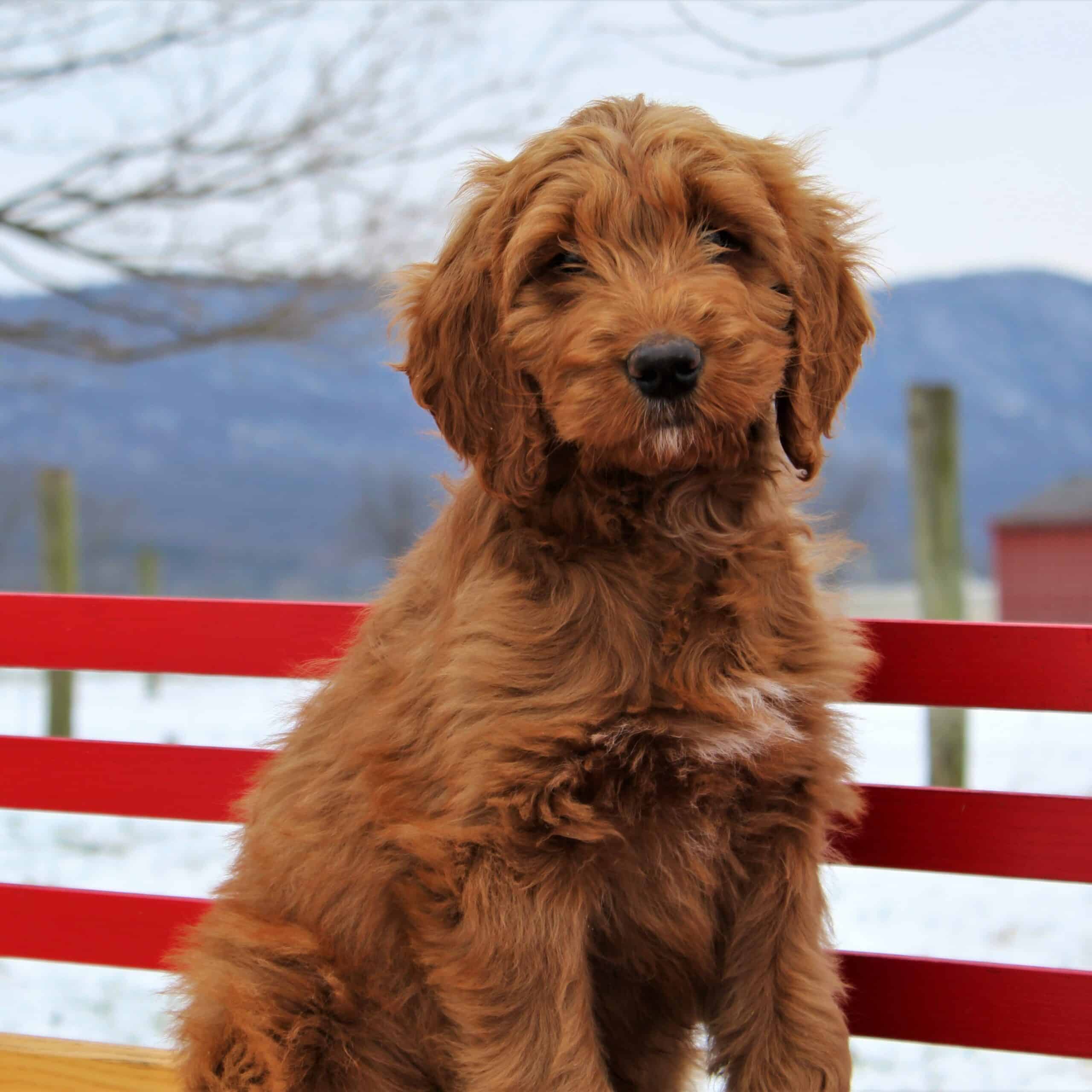 Our Mini Irish Doodle puppies for sale are energetic and fun-loving! A mix between a Mini Poodle and Irish Setter, Mini Irish Doodles weigh 25-35 pounds. Mini Irish Doodles usually have wavy or curly coats and are often red, mahogany, or apricot. They are playful, intelligent, and athletic and make excellent companions for someone with an active lifestyle!

Are you looking for a small, low-shed dog with lots of energy and an outgoing personality?

Check out our Mini Irish Doodle puppies for sale below!

A mix between a Miniature Poodle and an Irish Setter, Mini Irish Doodles are friendly, athletic, and intelligent. Weighing 25-35 pounds, they are a convenient, portable size, but don’t let that fool you! Mini Irish Doodles aren’t couch potatoes. They have high energy and stamina and love to run, fetch, and even swim!

Fun Loving: Energetic, friendly, and playful⁠, the Mini Irish Doodle is always ready for games and adventures! They love learning tricks indoors, meeting new friends at the dog park, or running on the beach.

High Energy Level: While Mini Irish Doodles may look like cute teddy bears that enjoy being carried in a backpack or curling up on the sofa all day, they aren’t. Irish Doodles aren’t you’re average mini doodle dog breed⁠—they have higher energy levels than other dogs of similar size. Plan to exercise your Mini Irish Doodle for about 90 minutes a day.

Outgoing: With both parent breeds natural people-lovers, you can expect your Mini Irish Doodle to thrive with children, new friends, and other dogs!

Athletic: Poodle and Irish Setters are known for their athleticism! Your Mini Irish Doodles will love water, hiking, playing fetch, and any other doggie games you come up with!

Intelligent: The Poodle and Irish Setter were bred to work alongside humans. They are smart dogs that are capable of learning many commands and will want to be kept busy! Training your dog, challenging canine puzzles, and enrolling them in dog sports or obedience classes will provide them with mental exercise and keep them happy!

Doodle breeds started to become popular in the late 1980s. Since Miniature Irish Doodles are a relatively new breed, there is little written history about this breed’s beginnings.

Let’s look at the history of the Poodle and Irish Setter to learn more about the Mini Irish Doodle’s past.

Although Poodles are the national dog of France, they originated in Germany, where they were bred and used as retrieving water dogs. At that time, the Poodle’s showy haircut was practical⁠—it allowed the poodle to move about easily while still protecting certain parts of its body, such as the paws, chest, and head.

With its elegance and intelligence, the poodle became a popular breed among nobles in France and other parts of Europe. Because of their trainable, attention-loving nature and showy looks, poodles were often used in the circus. They have also been used to hunt truffles⁠—underground mushrooms⁠—with their long snouts.

History of the Irish Setter

The Irish Setter was once a hunting dog in Ireland. Before the invention of firearms, hunters worked with dogs, falcons, and nets to capture game birds. The Irish Setter would “set” down on their belly when they smelled birds.

Later, when guns were used in hunting, Irish Setters would flush the game and retrieve it.

The Irish Setter dates back to the 1800s, and it is believed to be a combination of English Setters, spaniels, pointers, and Gordon Setters.

In 1875, an Irish Setter named Elcho came to the United States and was popular in the show ring and the field. The Irish Setter became a popular dog in America and was registered with the AKC in 1878.

The Irish Setter’s popularity was at an all-time high in the 1960s and 70s, partially due to a Disney movie called Big Red, which stars an Irish Setter.

Today, the Irish Setter ranks number 77 out of all breeds registered with AKC.

Mini Irish Doodles measure about 12-17 inches tall at the shoulder and weigh 25-35 pounds.

Miniature Irish Doodles usually have wavy or curly coats. They are often red, brown, apricot, or tan but can also be black, white, or gray. Some Irish Doodles have white patches on their chest and paws.

Mini Irish Doodles usually have brown eyes and dark noses. Their ears hang down on the sides of their faces.

Like any doodle hybrid, your Mini Irish Doodle will need to be brushed thoroughly 2-3 times a week and will need a haircut every 6-8 weeks to prevent tangles and mats.

Your Irish Doodle’s ears will need to be wiped out with a damp cloth regularly. Keep an eye out for redness, swelling, or itching that may indicate an ear infection.

Your pup will also need its nails trimmed and teeth brushed regularly.

Like all dog breeds, Mini Irish Doodles are at risk for hip and elbow dysplasia, two of the most common health issues in dogs.

Hip and elbow dysplasia can be genetic or caused by environmental factors such as overeating or injuries.

Bloat is when the stomach becomes twisted, and the gases in the stomach cannot escape. The pressure from these gases affects the blood flow to the heart, which can be fatal.

Although no dog is truly hypo-allergenic, Mini Irish Doodles are lower-shedding dogs, so the risk of allergens is reduced in this breed.

Remember, each puppy has a different combination of genes, so allergens vary from dog to dog. Spending time with a puppy before adopting them is a good way to know if its allergens trigger you.