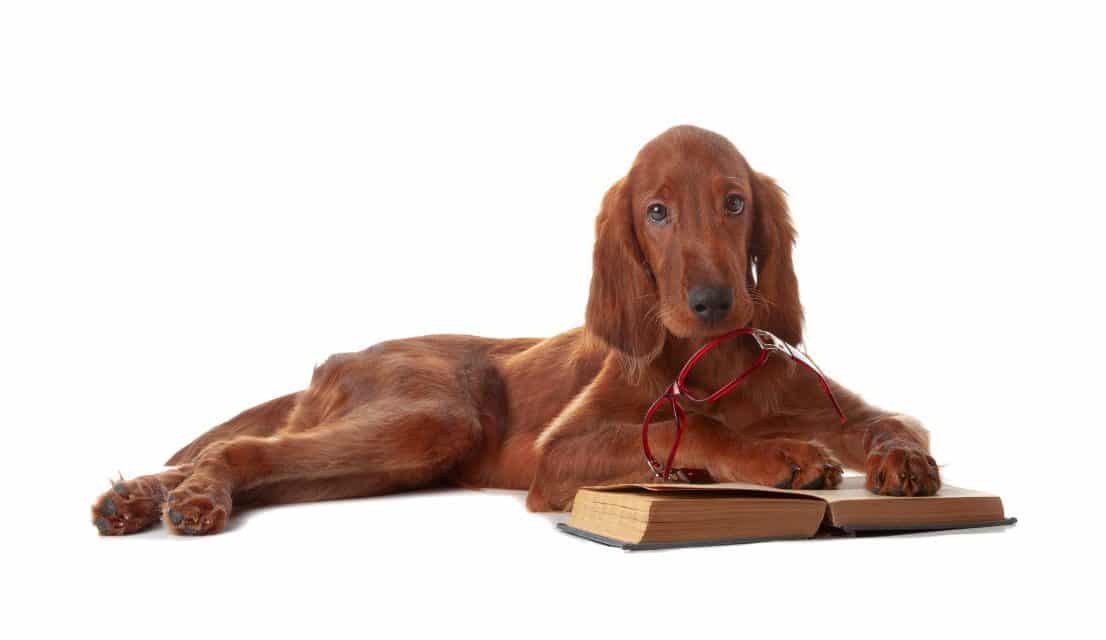 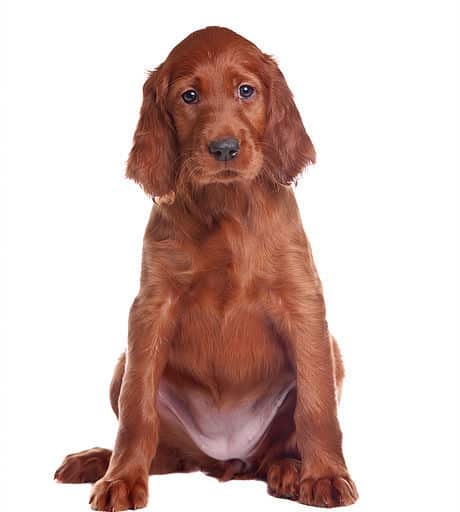 The Irish Setter is a very high energy and intelligent dog; full of life.  They are very loveable and enjoy being around people.  Jolly, giddy, and stubborn are good words to describe our Irish Setter puppies for sale.

Are you looking for a gorgeous, joyful, and intelligent companion?

Check out our Irish Setter puppies for sale below!

Irish Setters check all the boxes: intelligent, friendly, energetic, athletic, muscular, hardworking yet playful, and don’t forget – they are gorgeous, too!

Originally gundogs used to retrieve game, Irish Setters also make joyful, affectionate companions. If you live an active lifestyle, the Irish Setter could be the perfect companion for you!

Adopt your Irish Setter puppy today and welcome your new best friend to your home!

Gundog: The Irish Setter is a bird dog through and through! This means they have a great sense of smell, high endurance and are intelligent and independent thinkers. This means that while they learn quickly, occasionally, they can be stubborn.

Outgoing: Irish Setters love people. They are high-spirited, happy, and enthusiastic. New people will be welcomed with a joyful, wagging tail and an exuberant bark.

Beautiful and Graceful: Is the Irish Setter the most beautiful dog breed? Of course, beauty is in the eye of the beholder! However, the Irish Setter is known for its stunning, glossy red coat, spaniel-like ears, and strong yet elegant build. They have a graceful gait and do well in the show ring.

Playful: An Irish Setter matures slowly and never completely grows out of its playful puppy spirit. They will always be up for a game of tug of war or any other silly games you come up with.

Active: The Irish Setter is an enthusiastic and energetic breed! Irish Setters need plenty of exercise – at least an hour a day. Like any active breed, they will become frustrated and destructive without an outlet for their energy. In addition to fieldwork, Irish Setters excel at dog sports, obedience, rally, agility, and therapy work.

The Irish Setter was once a hunting dog in Ireland. Before the invention of firearms, hunters worked with dogs, falcons, and nets to capture game birds.

The Irish Setter would “set” down on their belly when they smelled birds.
Later, when guns were used in hunting, Irish Setters would flush the game and retrieve it.

The Irish Setter dates back to the 1800s, and it is believed to be a combination of English Setters, spaniels, pointers, and Gordon Setters.

In 1875, an Irish Setter named Elcho came to the United States and was popular in the show ring and the field. The Irish Setter became a popular dog in America and was registered with the AKC in 1878.

The Irish Setter’s popularity was at an all-time high in the 1960s and 70s, partially due to a Disney movie called Big Red, which stars an Irish Setter.
President Richard Nixon owned an Irish Setter named King Timahoe in the 1970s.

Today, the Irish Setter ranks number 77 out of all breeds registered with AKC.

Females measure 25 inches tall at the shoulder and weigh 60 pounds.

The Irish Setter’s most outstanding physical feature is its gorgeous coat! Irish Setters have straight, medium-length coats with feathering on their ears, legs, and belly.

Irish Setters can be red, chestnut, or mahogany. Sometimes they have a small white spot on their chest.

They have an elegant, lean build with long, hanging ears like a spaniel.

Your Irish Setter’s medium-length coat will need a thorough brushing about twice a week to remove loose hair and stay matt and tangle-free.

Irish Setters shed moderately most of the year and heavier twice a year during seasonal shedding. They will need to be brushed more often during heavy shedding seasons.

You’ll also want to bathe them every two to four weeks.

Because of the Irish Setter’s long, hanging ears, you’ll need to wipe the ears out with a damp cloth on a regular basis. Keep an eye out for redness, swelling, or itching that may indicate an ear infection.

Your Irish Setter will also need its nails trimmed and teeth brushed regularly.

Irish Setters are generally healthy dogs, but it’s essential for owners to be aware of conditions that may affect their dog.

Bloat in Irish Setters
Bloat, also called gastric dilatation-volvulus or gastric torsion, can affect any large breed dog and is a life-threatening condition.
Bloat is when the stomach becomes twisted, and the gases in the stomach are unable to escape. The pressure from these gases affects the blood flow to the heart, and it can be fatal.

Protect Your Irish Setter from Obesity
You can protect your dog from one of the most common health problems: obesity. One of the best ways to extend your dog’s life is by feeding them the correct amount of food and giving them adequate exercise.

Irish Setters are moderate shedders and are not considered an allergen-friendly breed. Regular brushing and bathing can help to keep allergens lower.