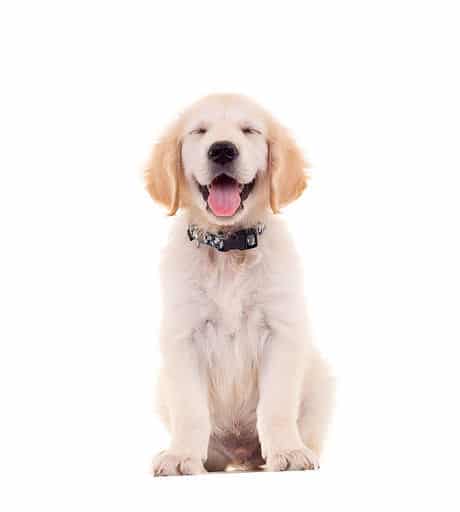 Our Goldador puppies for sale make excellent family companions and hunting dogs! A cross between the Golden Retriever and a Labrador Retriever, this breed thrives on attention and affection! They are talented, playful, and intelligent. They are happiest when they are kept busy or are beside their owner.

Are you looking for a beautiful, loyal, friendly, and intelligent dog breed?

Check out our Goldador puppies for sale below!

A cross between two of America’s most popular breeds: a Golden Retriever and a Labrador Retriever, the Goldador is a playful, family-friendly dog that excels in many areas!

Adopt your Goldador puppy today and start a friendship with this talented, loyal, and loving breed!

Active: Whether it’s a walk, game of fetch, or a swim (they LOVE swimming!) Goldadors enjoy being on the move with their family members! They excel in dog sports, including agility, obedience, and tracking.

Intelligent: Labrador Retrievers and Golden Retrievers are some of the most intelligent dog breeds, according to dog expert Dr. Stanley Cohen. Goldadors will be able to learn a new command in just a few repetitions. They can learn up to 200 spoken words.

Eager to Please: Goldadors love humans and want to make them happy. Their loyal, eager-to-please spirit makes them easy to work with and train. Therapy work and Search and rescue are great options for this intelligent, eager-to-please breed.

Friendly: Golden Lab Mixes are friends with everyone and are happiest when they are with people! They get along great with children and other dogs and pets. However, you should always supervise your Goldador when playing with small animals.

Not a Good Guard Dog: Goldadors are good watchdogs – they will bark if they see something unusual. But don’t rely on your Goldador to keep an intruder out of your house. Once the stranger pets them or gives them a treat, they’ll start wagging their tail.

Goldadors, or Golden Labs, are a designer breed that was developed more than a decade ago in America and has often been used as a guide or assistance dog.

Goldadors aren’t very common, but their parent breeds, Golden Retrievers and Labrador Retrievers are in the top 5 most popular dog breeds in America every year!

Goldadors are also called Golden Labs and Golden Retriever/Lab Mix. Here are some dog registries that may accept the Goldador:

To learn more about Goldadors, let’s look at the history of the Golden Retriever and the Labrador Retriever!

History of the Golden Retriever

The Golden Retriever breed has its origins in the Scottish Highlands in the late 1800s. Dudley Marjoribanks, also known as Lord Tweedmouth, was a gentleman dedicated to carefully breeding dogs and cattle.

His ultimate goal in breeding dogs was to create a breed that would do well in the Scottish climate and love hunting and retrieving the local game.

Over time, this breeding led to the beloved Golden Retriever.

The Golden Retriever was first shown at a dog show in Britain in 1908 and was brought to Canada and America around the same time. The breed was loved by sport hunters and show fanciers alike.

History of the Labrador Retriever

The Labrador Retriever breed has its origins in Newfoundland, which is off the Canadian coast.  Originally called “St. John’s Dog,” they were used as retrievers in the water for hunters and fishermen.

It is thought that the St. John’s Dog was crossbred in the 1700s with the Newfoundland Dog and other smaller water dogs.

British sailors who visited northern North America noticed the speed and ability of these dogs, and they began bringing them back to England. One of the most notable British to bring back one of these dogs was the Earl of Malmesbury. He used his new dogs to help hunt in the swamps and water of his estate.

The breed continued to grow in popularity, and in 1903 the Labrador Retriever was officially recognized by the English Kennel Club.

The American Kennel Club recognized the Labrador Retriever in 1917.

Goldadors, or Golden Lab Mixes, weigh between 55 and 80 pounds. They measure 21-24 inches tall at the shoulder.

Goldadors usually live for about 10-12 years.

Goldadors, or Golden Retriever/Lab, mix are usually sturdy, well-built dogs with wagging tails! They have dark eyes and a dark nose, and triangular ears that hang down on the sides of their face.

Goldadors often have a yellow coat, but they also can be chocolate brown or black.

Goldadors may have a long-haired coat like a Golden Retriever, or they may be short-haired like a Labrador. Whether long or short-haired, they will have thick, double coats just like their parents.

Goldadors, or Golden Retriever/Lab Mixes, have beautiful, thick double coats that need regular brushing. Their thick coat is waterproof and protects them from both cold and moisture.

Any dog breed with a double coat will shed heavily twice a year. During these times, you’ll want to brush your dog daily and bathe them more frequently to help remove the loose hair.

Your Goldador will need to be bathed at least once a month. You’ll probably end up bathing them more often since this breed is playful, energetic, and loves water, mud, digging, chasing, etc.

Your Goldador will also need its nails trimmed and teeth brushed regularly.

Like all dog breeds, Goldadors are at risk for hip and elbow dysplasia, two of the most common health issues in dogs.

Bloat is when the stomach becomes twisted, and the gasses in the stomach are unable to escape. The pressure from these gasses affects the blood flow to the heart, and it can be fatal.

You can protect your Goldador, or Golden Lab, from one of the most common health problems: obesity. One of the best ways to extend your dog’s life is by feeding them the correct amount of food and giving them adequate exercise.

Goldadors are heavy shedders and are not considered an allergen-friendly breed. Allergens can be lowered with regular brushing and bathing.