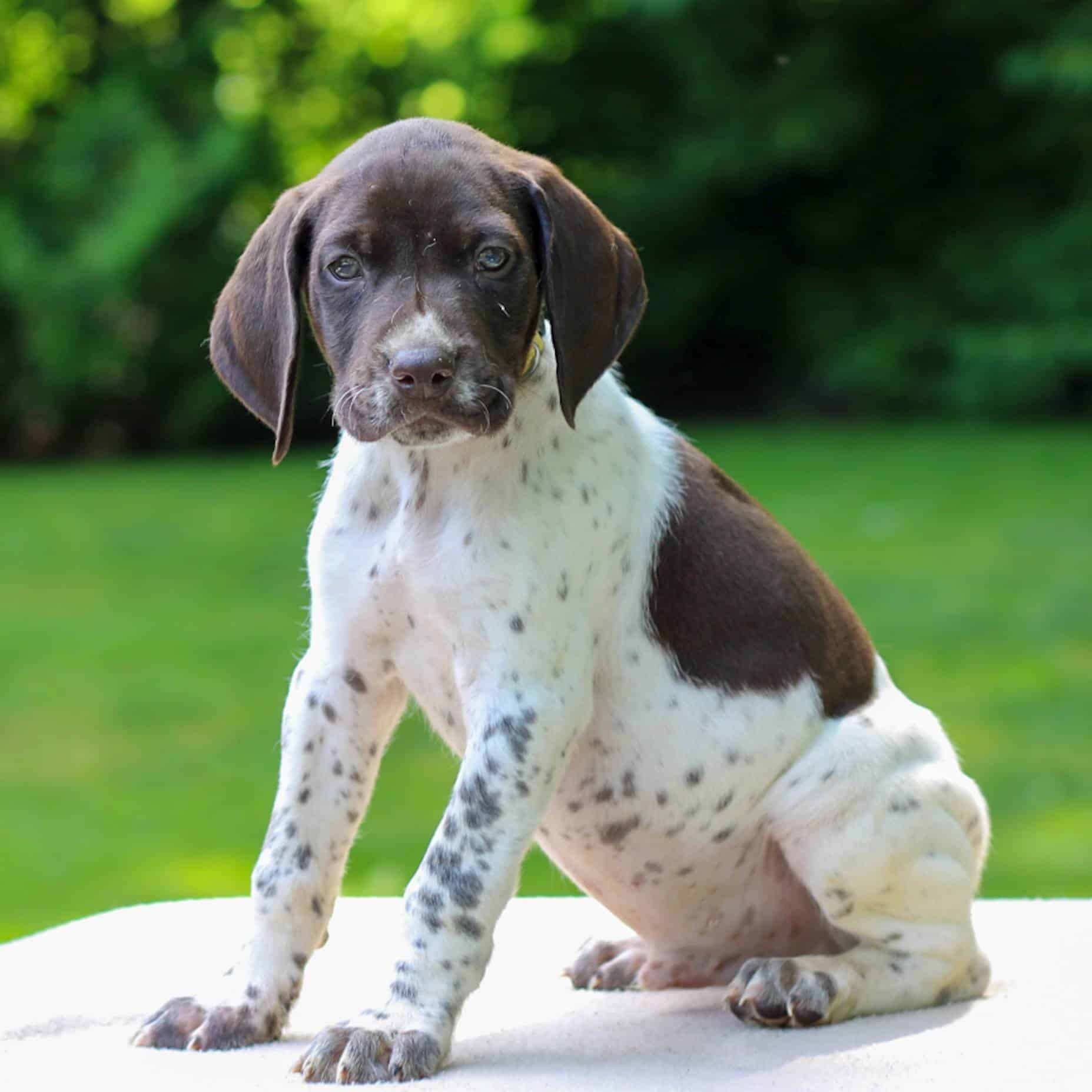 Are you looking for an intelligent, loyal, and athletic dog that is cooperative and friendly?

If this describes the dog you are looking for, then browse our German Shorthaired Pointer puppies for sale below!

As a hunting dog, German Shorthaired Pointers love to explore and make great running or hiking partners. They have a high endurance level and do well in many sports.

Loyal and Friendly: The German Shorthaired enjoy spending time with their owners and families; and play well with children.

Intelligent and trainable: German Shorthaired Pointers are brilliant and have lots of energy. Unless given proper training and exercise, their stamina and hunting instincts can turn into destructive behaviors. However, with consistency and purpose, their energy and hunting drive can be channeled into a wonderful companion!

A Good Watch Dog: This breed is alert and protective. They will quickly sound the alarm if something isn’t right but won’t be aggressive.

Versatile Hunting Dog: Called the “do-it-all-hunting dog” by AKC, the German Shorthaired Pointer is an excellent hunter, swimmer, and retriever. Their short hair is water repellent, and their feet are webbed, allowing them to work, hunt, and swim in all kinds of terrain and weather. The German Shorthaired Pointer’s strong drive for prey means that they may not be a good fit for homes with other small animals, such as cats, birds, or rabbits.

As firearms developed in the 17th century, Germany longed for the perfect dog: an intelligent dog that could endure all kinds of weather, was a good swimmer, had a keen sense of smell for trailing small or large game, could retrieve wounded game (including birds and deer), and was a loyal family companion with a regal appearance.

The nobleman, Prince Albrecht zu Solms-Braunfeld, played a large role overseeing the breeding of various gundogs, Spanish Pointers, and Bloodhounds. By the mid to late 19th century, Germany had created the German Shorthaired Pointer we have today.

In 1925, the breed was imported to the United States by Dr. Charles Morton, who continued to breed German Shorthaired Pointers.

In 1930, only five years later, the American Kennel Club officially added the German Shorthaired Pointer to the studbook.

During World War ll, German breeders hid their valuables – gold, art, and their best dog breeds– by sending them to Yugoslavia. However, when the war ended, Yugoslavia was behind The Iron Curtain, and breeders couldn’t access their well-bred German Shorthaired Pointers. At the same time, around 1950, this breed flourished in America, even winning AKC Championships.

Today, the German Shorthaired Pointers are among the top winners at competitive sports and are elegant, loyal companions.

German Shorthaired Pointers are considered a medium-sized dog; males are 23 and 25 inches standing at the shoulders, and females are 21-23 inches. Males weigh 55-70 pounds, while females are 45-60 pounds.

You can expect a German Shorthaired Pointer to live between 10-14 years.

The German Shorthaired Pointer is known for its lean, muscular body and noble appearance. It’s short, water-repellent coat is usually solid liver (reddish-brown) or patterns of liver and white. Their webbed feet make them excellent swimmers.

The German Shorthaired Pointers short coats need brushing every few days. They have heavier seasons of shedding, called “blowing their coat,” when they will need extra brushing.

Their short, coarse hair can be difficult to remove from upholstery, and because their coats are a mix of light and dark, the hairs will show up on light and dark surfaces.

Their large ears should stay clean and dry to prevent infections.

You’ll also want to give your German Shorthaired Pointer other basic care, including occasional bathing, trimming nails, and brushing teeth.

German Shorthaired Pointers are relatively healthy, but there are a few things to know as you care for them.

They are prone to bloating, so don’t feed them right after vigorous exercise, and don’t exercise them right after eating. Learn the symptoms of bloat (also called torsion), so you can take action if it occurs. It can be life-threatening for your dog.

They also can be susceptible to certain heart conditions and cancers.

Like all dog breeds, German Shorthaired Pointers are susceptible to hip and elbow dysplasia, two of the most common health issues among dogs. Hip and elbow dysplasia occurs when the leg or hip becomes weakened, and it can result in arthritis or potential lameness if not addressed.

German Shorthaired Pointers have heavy seasonal shedding and are not the best breed for someone with allergies. You can keep allergens lower with regular brushing and bathing, but if someone in your home has animal allergy concerns, please consult your family physician.