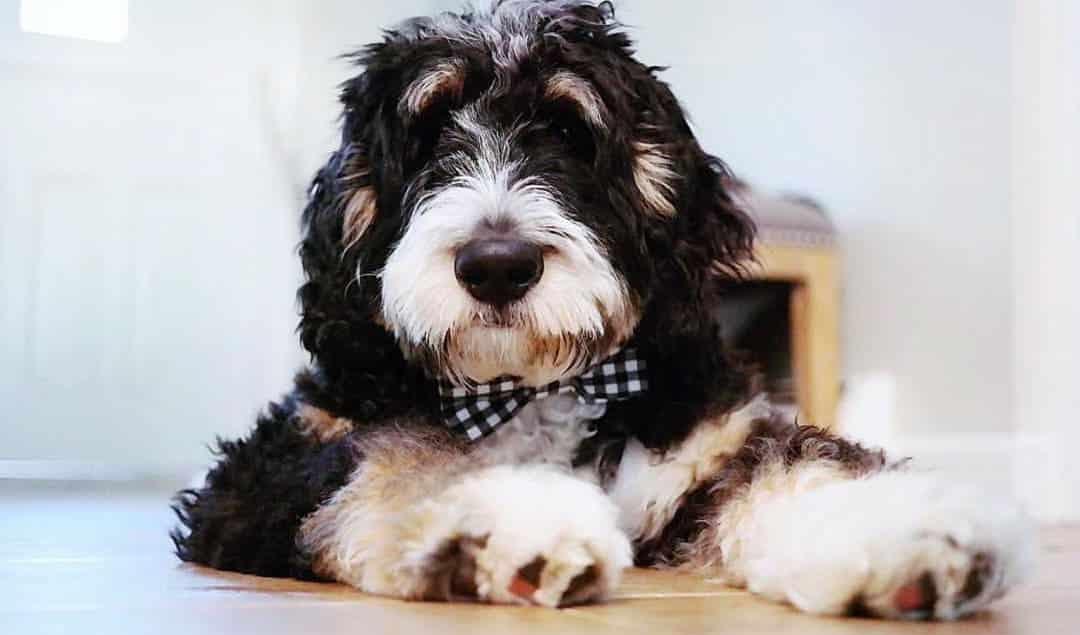 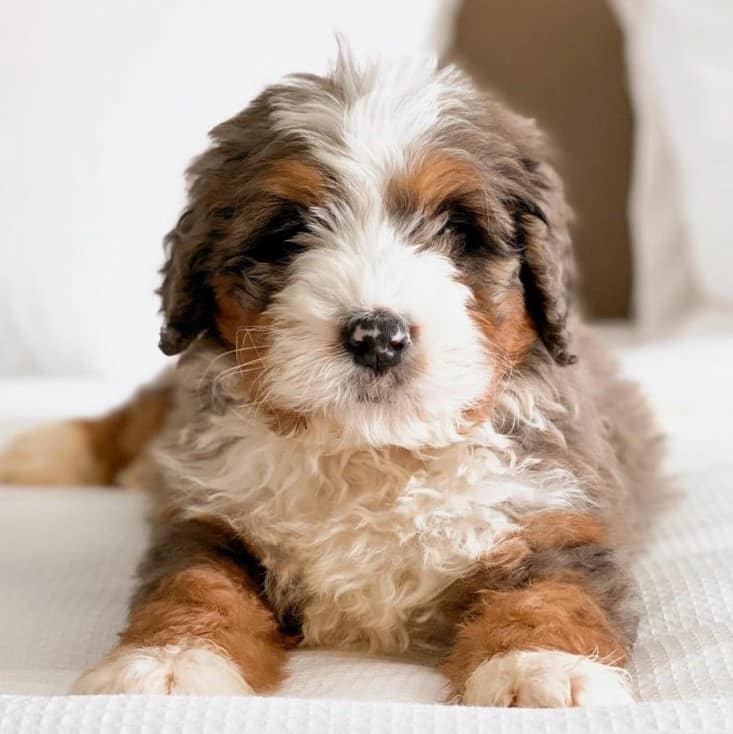 Our Australian Mountain Doodle puppies for sale are easy-going, friendly, intelligent, allergen-friendly pups and make exceptional companions for anyone!

These adorable wavy-coated puppies are a cross between the Bernadoodle (Bernese Mountain Dog x Poodle) and the Aussie Doodle (Australian Shepherd x Poodle).

Browse our Australian Mountain Doodle puppies for sale, and bring home a pup that’s smart, gentle, and eager to please!

Are you looking for a laidback, people-loving, low-shed dog that’s easy to train?

Take a look at our Australian Mountain Doodle puppies for sale below!

Australian Mountain Doodles, or Aussie Bernadoodles, are a mix between the Aussiedoodle and the Bernadoodle. These fluffy, friendly dogs are laidback, lovable, and intelligent!

They get these wonderful traits from the Poodle, Australian Shepherd, and Bernese Mountain Dog. They are sometimes called “double doodles” since both parents are poodle mixes. Other names include Swiss Doodles and Aussie Bernadoodles.

Intelligent and eager to please: A combination of some of the smartest dog breeds, Australian Mountain Doodles have great brains and great temperaments. Intelligent dogs need opportunities to use their mind. Do not keep an Australian Mountain Doodle (AMD) in a kennel. They need to be part of the family and allowed to interact and work with humans. AMDs make excellent therapy and companion dogs.

Outgoing: Australian Mountain Doodles love adults, children, and other dogs. They will sound the alarm at strangers but will be friendly.

Allergen-Friendly: The poodle is one of the lowest shedding breeds and many people with allergies can tolerate doodle breeds. However, each puppy receives a different combination of genes so it’s always best to spend time with a puppy before adopting it, in addition to talking to your doctor.

Easy-Going: The Australian Mountain Doodle gets its easy-going personality from the Bernese Mountain Dog. AMD’s have a nice, low to medium energy level that is great for families.

Australian Mountain Doodles, or Swiss Doodles, are a relatively new breed and there’s not a lot of recorded history about them at this time.

Let’s look at the history of the Australian Shepherd, Bernese Mountain Dog, and Poodle to learn more about this breed.

History of the Australian Shepherd

An indigenous people group called the Basques developed a bloodline of herding dogs for their large flocks of sheep and cattle. As Australia opened up to cattle ranchers, groups of the Basque people went to Australia to grow their herds and farms.

After a few generations, groups of Basques began migrating to California in the 1800s.  As they settled in California, many of the nearby ranchers admired the herding dogs of the Basques.

Since they arrived in California, the breed has been widely recognized as a staple on ranches, cattle farms, and living with cowboys.

History of the Bernese Mountain Dog

The Bernese Mountain Dog is one of the four mountain-dog breeds that come from the canton of Bern, an agricultural region in Switzerland. Many dairy farms in this area make milk for two of Switzerland’s most profitable products: cheese and chocolate.

For several hundred years the Bernese Mountain Dog was used to herd cattle on the farms, protect the livestock from predators, and pull small carts.  Due to their large size and power, they were able to carry carts of milk and other dairy products.

Bernese Mountain Dogs became popular in the United States when a Kansas farmer used a pair as farm dogs in 1926, and the breed became an AKC registered breed in 1937.

Today they are more commonly used as family pets instead of working on a farm. However, sporting events are still hosted that showcase the Bernese Mountain Dog’s power and agility with carting and drafting events.

Australian Mountain Doodles usually measure 19-22 inches at the shoulder and weigh between 30 and 50 pounds.

There is a wide variety in the appearance of Australian Mountain Doodles or Aussie Bernadoodles.

They often have thick, wavy coats that give them a shaggy or fluffy appearance. Their ears usually droop down on the sides of their face. They can have dark or light eyes and dark or light noses.

Although many people like Australian Mountain Doodles for their minimal shedding, their curly coats still need some extra care.

They need to be groomed every 4-6 weeks and brushed regularly, or their coat will become matted and tangled. You can take your pup to the groomer or learn to give them a haircut by yourself.

No matter the breed of your pup, you can protect your dog from one of the most common health problems: obesity. One of the best ways to extend your dog’s life is by feeding them the correct amount of food and giving them adequate exercise.

Like all dog breeds, they are at risk for hip and elbow dysplasia, two of the most common health issues in dogs.

Bloat is when the stomach becomes twisted, and the gasses in the stomach are unable to escape. The pressure from these gasses affects the blood flow to the heart, and it can be fatal.

Conditions That Can Affect Poodles

Bernese Mountain Dogs are at risk for hip and elbow dysplasia, bloat, blood disorders, some cancers, and progressive retinal atrophy.

Conditions That Can Affect Australian Shepherds

Australian Shepherds are at risk for hip dysplasia, epilepsy, cataracts, and certain forms of cancer.

Allergens are caused by dander, which is dead skin cells. Both animals and humans shed these skin cells. Dander is attached to the hair that dogs shed.

Although no dog is truly hypo-allergenic, Australian Mountain Doodles are lower-shedding dogs, so the risk of allergens is reduced in this breed.