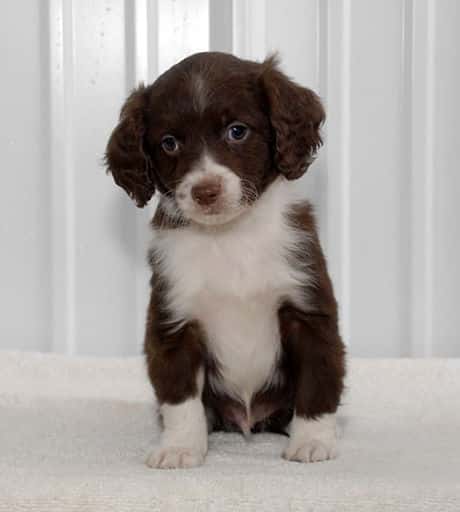 Or, if you’re interested in another breed, check out all our puppies for sale.

Are you looking for a medium-sized dog with beautiful coat markings, and love for running and activity, and a desire for close human companionship?

If this describes the next idea family member for your home, then browse our Australian Shepherd puppies for sale below!

Affectionately known as an “Aussie,” even though they didn’t originate from Australia, the Australian Shepherd brings a level of activity, high intelligence, and a natural herding instinct to every home it enters.

If your home has room for an active dog that loves human attention, you need to consider buying an Australian Shepherd puppy!

Herding: The breed was bred for herding, and it takes this natural tendency to more than just sheep or farm animals. It has been known to try and herd animals, and even people, using nips, barks, and other herding techniques.

Companion: Even though they are known for herding, Australian Shepherds are just as popular for their love for human attention and companionship. They love to hang out with people, especially their owners or others they know well!

Intelligent: The breed has a keen intelligence and can quickly be taught new things. If you start giving them consistent training and feedback as a puppy, they will grow to be an obedient and smart adult dog.

Active & Athletic: Adult Australian Shepherds love to run, and they have athletic bodies to back up their energy. Their agile and muscular form, combined with their energy and high stamina, make them great running dogs but not ideal for small, confined areas.

Alert & Protective: As part of the herding instinct, the breed has a wary eye for strangers or other intruders that pose a threat. They are quick to bark when something doesn’t feel right, and their first instinct is to protect whatever they are supposed to be guarding.

There are some unknowns about the exact history and breeds used to create today’s Australian Shepherd breed, but one thing is known:  The breed we have today originated from Europe, not Australia!

An indigenous group of people, called the Basques, developed a bloodline of herding dogs for their large flocks of sheep and cattle.  As Australia opened up to cattle ranchers, groups of the Basque people went to Australia to grow their herds and farms.

After a few generations, groups of Basques began migrating to California in the 1800s.  As they settled into California, many of the nearby ranchers admired the herding dogs of the Basques.

Since their arrival in California, the breed has been widely recognized as a staple on ranches, cattle farms, and living with cowboys.

Adult Australian Shepherds are a medium-sized height and weight.  They typically stand 18-23’ tall at the shoulder and weight between 40 and 65 pounds.

Australian Shepherds have a typical lifespan for dogs of 12-15 years.

Australian Shepherds have a double-coat.  The inner coat is water-proof, and the outer coat is either straight or wavy and medium-long length.

Their coats often are multi-colored.  The primary color is often a shade of black, blue merle, red, red merle.  The coats are typically trimmed with white and/or copper.

They are also known to have a wide range of different eye colors.

Australian Shepherds require regular grooming due to their medium coat length.  They also have a couple of heavy shedding seasons.

They should be brushed and groomed several times a week, and daily during their shedding season.

If your dog has wavy or longer hair, make sure you remove all the loose hair, dirt, and other debris.  If these items are not removed, it causes tangles and more clots in the hair.

The Australian Shepherd breed is generally healthy, and adults can usually remain healthy as long as they receive a daily 30-60 minutes of good exercise and don’t become overweight.

One thing to watch for as they age is ailments in the eye, such as cataracts.  Thankfully, this can sometimes be addressed with surgery.  As your dog ages, watch for cloudiness or a lack of vision in their regular activity.

With their love to run, even the adults should have minimal running on pavement and concrete, and instead have access to yards, parks, and other softer terrain.

With their long, sometimes wavy hair, Australian Shepherds are not a breed known for being allergen-friendly.

Allergens are caused by dander, which is dead skin cells.  Any animal, including humans, are capable of shedding these dead cells.  While regular grooming helps reduce the loose hair (and therefore dander) from Australian Shepherds, they still produce many allergens.

If you have someone in your home with animal allergy concerns, it is good to consult your family physician before buying an Australian Shepherd puppy.