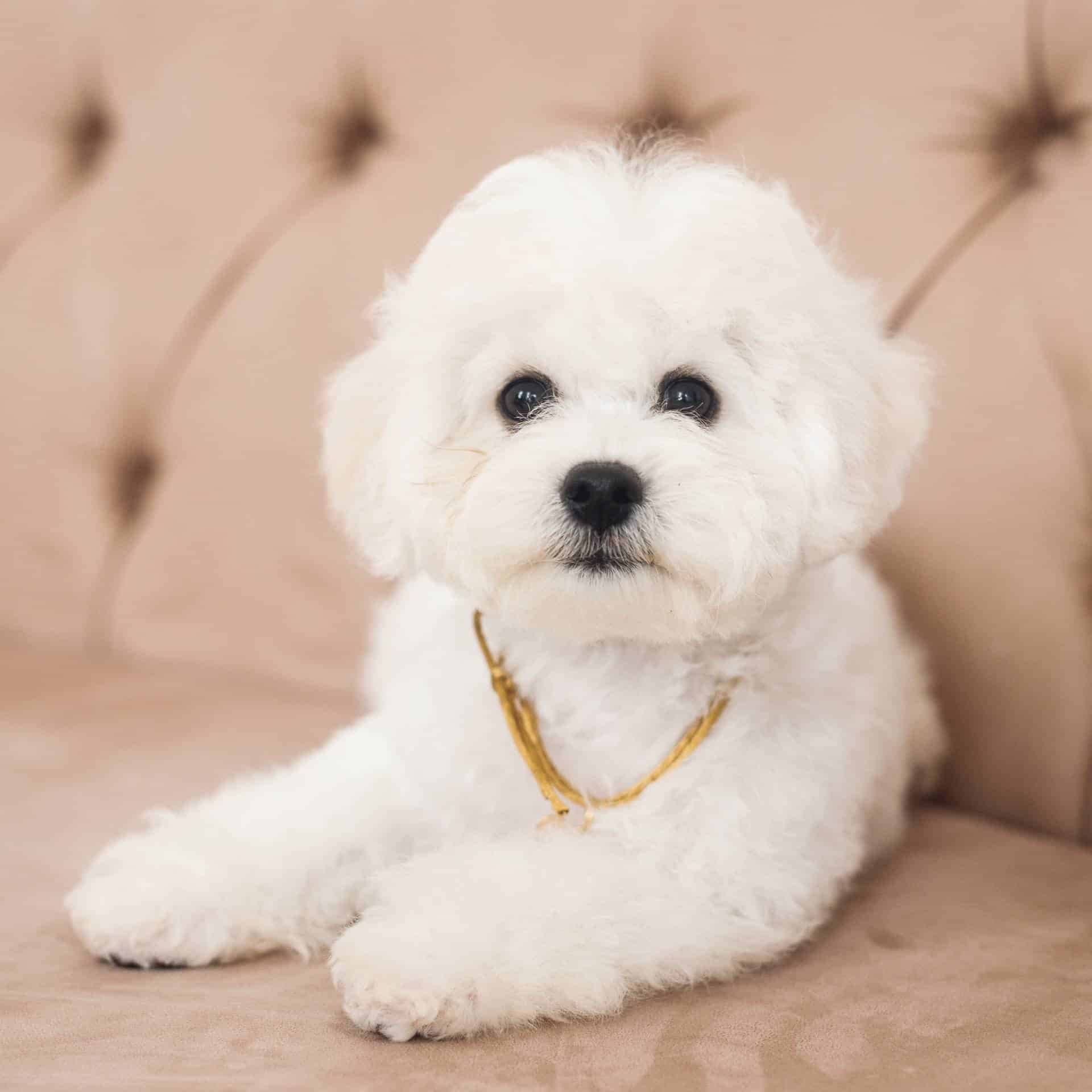 Are you looking for a small dog that loves to play, thrives on human interaction, has a beautiful coat, and always wears a smile?

If this is what you want in your next dog, then take a look at our Bichon Frise puppies for sale!

Although they are a smaller dog breed; their heart, character, and energy make up for their small size.  Known as a loving dog that knows no strangers or enemies, Bichon Frise puppies make a great addition for any person or family looking for a loving companion.

If you want a beautiful, small dog that will bring cheer and love into your home, then purchase your Bichon Frise puppy today!

Playful: The breed loves to play, both with humans and other dogs. They know almost no strangers and love spending time playing and interacting with anyone, especially when they are the center of attention.

Charming: The small size of the breed, combined with its large eyes and plush coat, makes the Bichon Frise an adorable breed. Mix in their friendly nature and cheerful attitude, and you have one of the most charming dogs you can find.

Alert: The Bichon Frise breed is an alert breed. They notice when things are unusual or out of place. Even though they are small, they do make good watchdogs because they are quick to alert their owners if something strange is happening.

Cheerful: Bichon Frise dogs are known to be happy and cheerful. As long as they are with people, they are usually content and cheerful.

Peppy: Bichon Frise puppies have plenty of energy. Whether they are inside or outside, they love activity. They are famous for the “Bichon Blitz” which consists of spurts of extra energy that last 1-3 minutes and are followed by a rest period.

While the exact history of the Bichon Frise is uncertain, it is agreed that they are one of the older dog breeds.

While they went by different names throughout history, it is thought they originated in the Mediterranean Sea area or the Canary Islands.  Some claim they have existed for over 2,000 years and were used as a trade item due to their small size and white coats.

In the 1300-1500 range, European sailors began bringing back the small white dogs that they found during their explorations.  These dogs became popular in the royal courts of Spain, Italy, and France.

From 1500 to the early 1930’s, the Bichon Frise was often associated with royalty.  However, this also meant it was an unpopular breed during events when royalty faced disapproval, such as the French Revolution.

In 1933, the official breed standard was established in France.  In 1956, the breed was brought to the United States, and was recognized by the American Kennel Club as a breed in 1971.

Bichon Frise adults are about 9-11 inches tall at the shoulder.  They usually weigh 8-18 pounds.

Bichon Frise dogs have an expected lifespan of 12-15 years, but some have been known to live longer than 15 years.

The Bichon Frise has a distinct double-coated white coat.  Left to itself, the coat becomes long and curly.

The undercoat is soft and dense, while the outer coat is more course.  These combine to give the Bichon Frise a soft feel, but also a firm underlying texture.

Because of their coat, the breed does require some extra care and maintenance.  While they might not shed as much as some breeds, it can be misleading since the hair will sometimes get stuck in the outer coat instead of simply falling to the ground.

The coat can become quickly matted and tangled from this caught hair, and it is important to brush out these tangles when grooming.

The coat should be brushed daily, and it is recommended that they are professionally groomed and cleaned every couple of months.

The Bichon Frise is overall a healthy breed, and with regular care, they should not have major health issues.

The breed has been known to have early tooth loss or gum implications if dental care and regular teeth cleanings are not done.  Because of their hairy ears, it is also important to make sure the ears stay dry and clean, otherwise, they can develop ear infections.

Because of their small size, it is important to use caution when playing with them.  Children should be taught how to properly play with Bichon Frise dogs in a way that is gentle and does not cause harm.

Like all dog breeds, Pomeranians are susceptible to hip and elbow dysplasia, two of the most common health issues among dogs.

While the Bichon Frise has a hairy coat and does shed, much of the hair tends to get caught in its outer coat instead of dropping to the ground.

Because of this, the breed does tend to produce fewer allergens and dander than some other dog breeds.  However, it is crucial that your dog is brushed daily to remove this caught hair; otherwise, you will begin to see loose hair on the ground.

If someone in your household struggles with pet allergies, you may want to consult a doctor on what should be done before bringing your Bichon Frise puppy home.  Daily grooming helps, and there are medications that can help prevent allergic reactions to pet dander.

Either way, regular grooming and cleaning will reduce the allergens from your Bichon Frise, especially if you start as a puppy and it becomes a routine in your schedule.