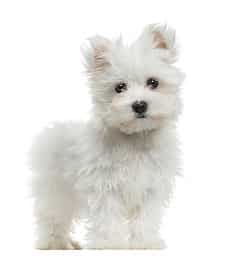 These Maltese puppies for sale are classy little aristocrats with a silly side. Bubbly and buoyant, they ham it up to everyone. These sweet toy dogs will make an excellent addition to your family!

Are you looking for a small, spunky, sprightly companion to brighten your home or apartment?

Browse our Maltese puppies for sale below!

Maltese dogs were bred and born to be companions. They are sociable, friendly, and thrive on human love and interaction. As toy dogs, they do well in apartments. They should not be kept outside, as they are somewhat fragile and do not easily tolerate being left alone.

Because they are small and delicate, Maltese dogs are not the best choice for families with small children. Puppies, especially, may get hurt if they are dropped or over-hugged.

That said, these dogs will make an excellent companion for almost anyone! Purchase your Maltese puppy today!

Companionable: Maltese dogs were designed to be companions. They will never tire of human company. They adore their humans and want to be with them 24/7. That kind of hero-worship does the soul good! But…nothing is free. This love and attachment can also cause some separation anxiety issues.

Trainable: Because Maltese dogs love their people so much, they are fairly easy to train. They are eager to please and do well with positive reinforcement. They are smart and catch on quickly. To them, training is all fun and games as long as there are people involved!

Clownish: Maltese dogs are comfortable in the spotlight. They love to clown around and soak up attention and praise. These sprightly, silly little dogs will have you rolling on the floor with their antics.

Alert: Although small, Maltese dogs can make good watchdogs. They are alert and aware of their surroundings and will let you know if anything is out of the ordinary.

Housedog: As one of the smallest toy breeds, Maltese dogs make great house or apartment dogs. They are delicate and fragile and are not hardy enough to be outside dogs. Also, they do not enjoy being left alone in a doghouse where there are no people. They may get depressed and destructive if left alone.

The Maltese breed has had a lengthy (and Mediterranean!) history. Having been around since the time of the ancient Egyptians, it is one of the oldest toy breeds.

Nobody knows the exact origins of the breed. But some believe that it developed on the Isle of Malta, in the Mediterranean sea, from Spaniel and Spitz breeds. Others say that it originated in Italy or Asia.

Wherever they originated, these winning canine aristocrats charmed human nobility the world over. They graced the laps of Egyptian pharaohs, Roman Emperors, and Greek Tribunes. In some cultures, they became status symbols and fashion statements. No wealthy Roman lady was complete without her “Roman lady’s dog.” Ancient poets and painters immortalized the dogs in their artwork. Later, they became the favorites of European nobles such as Good Queen Bess, Mary Queen of Scots, Queen Victoria. They were also popular among French nobles.

Although the Maltese breed weathered the Dark Ages and the Fall of Rome, humans nearly destroyed it in the 17th and 18th centuries by trying to breed it down to the size of a squirrel. They saved the breed by mixing it with Poodles and Miniature Spaniels.

Later, English breeders further developed the breed, and it became known in the United States in the 1870s. The American Kennel Club recognized it as a breed in 1888.

The Maltese is one of the smallest toy breeds, weighing 4-7 lbs and standing around 9-10″ at the shoulder.

Maltese dogs are pretty long-lived. They can live anywhere from 15-18 years.

These dogs are stunners! Their standout feature is their silky, flowing white coats. Their coats can fall all the way to the floor, giving them an elegant aura. They also feature black shoe-button noses, rounded skulls, and melting black eyes.

That white mantle is stunning. But it’s not exactly low-maintenance. It can easily become matted and dirty, and your Maltese might start losing that glorious and silky shine. He should be brushed and bathed regularly.

Also, Maltese dogs are prone to getting unsightly tear stains around their eyes. These are not harmful and are merely unattractive.

All dogs have the potential to develop health problems. The Maltese is no exception. Here are a few of the things you should watch for:

Allergens are caused by dander, which is dead skin cells. These skin cells are shed by any animal including humans.

The Maltese may be a good choice if you struggle with allergies. They do not have an undercoat and shed very little. Some consider the Maltese to be a hypoallergenic breed.

However, there is no such thing as an entirely hypoallergenic dog. And allergies are often caused by dog saliva, not hair. If you have someone in your home with animal allergy concerns, it is good to consult your family physician.