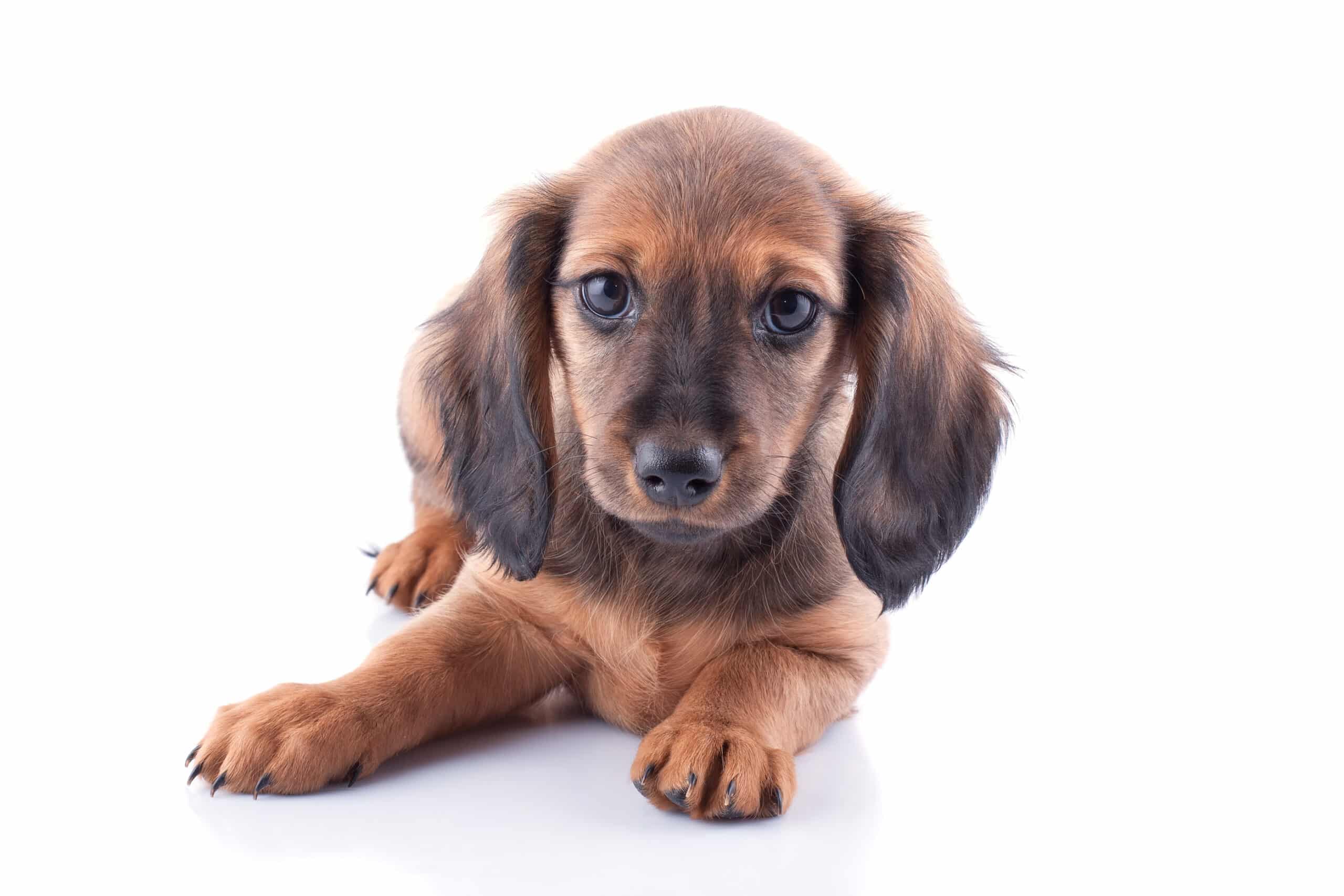 Are you looking for a small, adorable (and sometimes mischievous!) puppy that is also a loyal companion and excellent watchdog?

Take a look at our Mini Dachshund puppies for sale below!

Known for their long, low bodies and strong legs, Dachshunds were originally bred in Germany to dig into badger holes, but they have since won a place in many family’s hearts.

If you are ready for a devoted companion that doesn’t take a lot of room but still brings a lot of energy and humor into your home, then a Mini Dachshund puppy may be right for you!

Purchase your Mini Dachshund puppy today and welcome your new best friend to your home!

Playful: Mini Dachshunds love to play and have fun. No matter the activity you are doing, they are sure to be close by and wanting to enjoy the moment with you.

Brave: They may be small, but nobody told the Dachshund breed that this matters! Bred originally to fight badgers, they aren’t afraid to confront strangers or times of danger. This bravery can become an issue and result in aggressive or brash behavior if not properly trained.

Devoted: Mini Dachshunds quickly develop a secure bond with their owners, especially when they have a small family or single owner. They are known to become jealous if they sense their devotion or time with their owner is being challenged by others.

Determined: With their short, strong body and a high level of intelligence, Mini Dachshunds can be stubborn. They aren’t quick to give up on something they want, and their intelligence allows them to focus on something until they have it.

The Dachshund breed originated in Germany and was bred to dig into badger holes.  In fact, the word “Dachshund” literally means “badger dog” in German!

It is thought the breed started being bred and used for badgers in the 1300s or 1400s. Dachshunds were also used for foxes and wild boar at the time. Because of the size of a badger hole and the ferocity of badgers, the German people looked for a small dog with the bravery, boldness, and strength to fight a badger in its hole. However, these dachshunds were larger, weighing 30-35 pounds. Smaller dachshunds hunted rabbits and weasels.

As the breed became standardized, it started growing on people’s hearts and was used for more than just badger hunting and farm work. Its heritage includes, the Braque, a small French pointing breed, and the Pinscher, a small terrier-type ratter, as well as French Bassets Hounds. Long haired and wire haired dachshunds are said to have terrier in them.

By the late 1800s, there were common standards when it came to the breed’s size.

The breed entered the AKC (American Kennel Club) in 1885, and they have been popular ever since. They hit a significant milestone in the 1950s when they were ranked as one of the most popular breeds.

They did have a dip in popularity in America during World War I due to their association with the German Republic. Some took to calling the breed “Liberty Hounds” during the war and several years after.

However, these charming dogs were irresistible, and it didn’t take long before they became popular again!

Today, they rank twelfth in the breeds registered with AKC.

If fed a good diet and kept a healthy weight, Dachshunds can live 12-16 years.

Mini Dachshunds are recognized for their short legs, long back, and floppy ears. They have big, expressive eyes.

There are three varieties of coats: smooth, longhaired, and wirehaired. Mini Dachshunds coats can be a various of colors, including red, black, chocolate, cream, brindle, and more.

Dachshunds also have barrel-like chests and extra-large lungs. These traits give them a loud, hound-like bark.

The grooming needs of your Mini Dachshund will depend on the type of its coat. However, all dachshunds love to roll in smelly things – so they’ll need an extra bath when that happens!

Smooth-coated Dachshunds are the easiest to care for – a wipe with a damp towel in between baths and a brush with a hound glove occasionally should keep their coat healthy.

For Longhaired Dachshunds, brushing and bathing needs will vary depending on the thickness of their coat. A good brush every few days to once a week will keep tangles out of their elegant coat.

Wirehaired Dachshunds will be brushed every 2 -3 weeks, and their coat will need “stripped” 2-3 times a year.

Mini Dachshunds can quickly become lazy and overweight. This is taxing on their long back. Dachshund should have at least 20 minutes of walking and playing each day. Feed them high-quality food that will nourish them. Talk to your breeder and vet about the right amount of food for your size and breed of Dachshund.

Along with keeping your Mini Dachshund a healthy weight, make sure your puppy never jumps off furniture; this can injure their long back. Train your Dachshund puppy to use ramps or steps if you want them to climb onto the couch or a bed.

The breed is also susceptible to bloat, so watch for unusual restlessness, nervous pacing, or other signs of pain and abnormal behavior.

Allergens are caused by dander, which is dead skin cells. Both animals and humans shed these dead skins cells. Dander is attached to the hair that animals shed.

Mini Dachshunds are considered a moderate shedding dog and are not hypoallergenic.

Allergens can be kept at a minimum if they are brushed and bathed regularly.

If you or someone in your home has animal allergy concerns, please consult your family physician before adopting a puppy.