“Got our French bulldog puppy from Steven and we are thrilled with him :)” – April Dannenberg 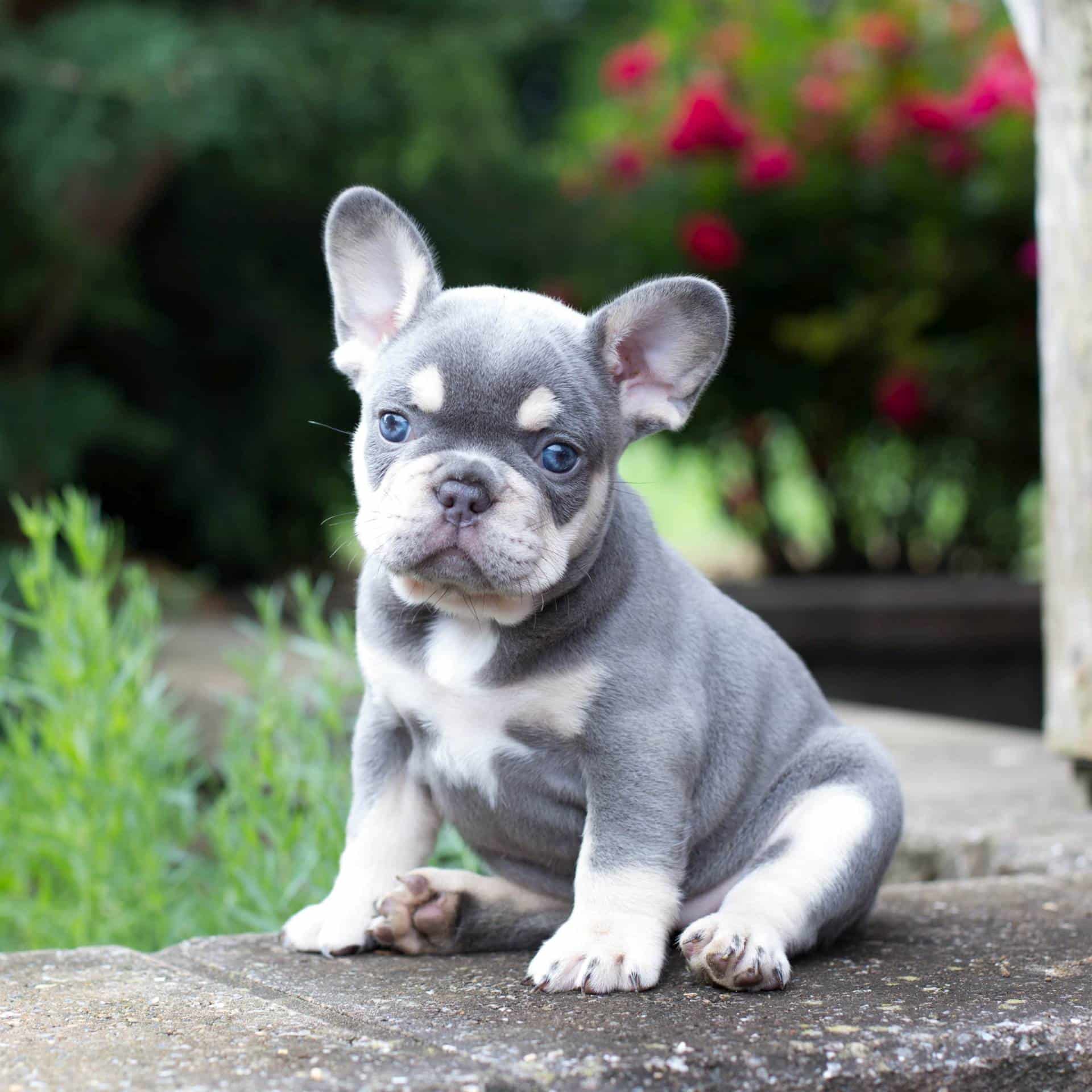 Are you looking for a sturdy, muscular dog that loves human interaction, is excellent with children, and is guaranteed to make you laugh with its charming personality?

If that is what you want in your next puppy, then browse our French Bulldog puppies for sale!

Smaller than a traditional Bulldog, French Bulldogs thrive on being part of the family and involved in any family activities.  They don’t require as much exercise or energy as some dogs, but they still love playing with children and showing their humorous side in the process.

If you are looking for a charming, fun-loving addition to your family, then purchase your French Bulldog puppy today!

Human Companion: French Bulldogs are known for their love for humans and their need for human contact and companionship. They will usually get along well with anyone, and they are especially fond of children.

Playful: Although they are not a high energy dog, French Bulldogs still love to play and interact with people. They are also quick to feel left out if not included in family activities.

Humor: French Bulldogs are a breed that loves to make their owners laugh! They are charming dogs that love to show their silly side during play.

Lower Energy: Overall, the French Bulldog line is not a high-energy breed. This does not mean they don?t need exercise! Being lower energy, French Bulldogs do not need as much room to roam in a house, and a couple of daily walks will usually meet their required exercise.

Alert: Although they are small dogs, French Bulldogs still make good watchdogs because they are very alert and defensive. They are quick to alert their owners if something is amiss, and they are not afraid to defend their family during danger.

Although they have “French” in their names, the French Bulldog breed has its origins in the city of Nottingham, England.

Small toy dogs resembling Bulldogs were popular with English lace workers in the 1800s, but as the Industrial Revolution came and changed the sewing industry, many of these workers lost their jobs and moved to France.

They took their toy Bulldogs with them, and soon French shopkeepers were also in love with the small dog.

Over time, these toy dogs were bred with other small breeds, and through this breeding, the French Bulldog breed was eventually established.

The French Bulldog became associated with excellence and the Paris upper class, and by the end of the 1800s, the breed had become popular across Europe and the Americas.

The American Kennel Club recognized the French Bulldog breed in 1898.

French Bulldogs are usually 10-12 inches tall at the shoulder, and they typically weigh 16-28 pounds when adults.

The typical lifespan of a French Bulldog is 10-14 years.

While they do resemble a miniature Bulldog, French Bulldogs are known for their large, erect ears.  These are sometimes referred to as “bat ears.”

Similar to other Bulldogs, French Bulldogs have large, square heads, wrinkles that appear heavy and rolling, and extremely short noses.

Their body build is compact and muscular.

French Bulldogs are relatively easy to keep groomed and clean because of their coat.  With a short, fine, smooth coat, brushing your French Bulldog several times a week with a softer bristle brush.

They do typically shed heavier twice a year.  During these times, make sure any excess hair is removed daily.

Due to their unique body build and stubby noses, there are a few health concerns that are specific to the Bulldog family, and this includes French Bulldogs.

First, be on the alert for brachycephalic airway syndrome.  French Bulldog’s compressed noses and airways can make it difficult for the dog to breathe during exercise, and this is compounded if the dog has an elongated soft palate or a narrow nasal cavity.

Pay close attention to your French Bulldog during exercise, and see a vet if your dog seems to have trouble breathing during times of minimal stress or exercise.

Second, French Bulldogs are not skilled swimmers due to their front-heavy build.  They should not be left unattended near bodies of water, swimming pools, or even full bathtubs.

Like all dog breeds, French Bulldogs are susceptible to hip and elbow dysplasia, two of the most common health issues among dogs. Hip and elbow dysplasia occurs when the leg or hip becomes weakened, and it can result in arthritis or potential lameness if not addressed.

One of the best ways to prevent this is by keeping your French Bulldog from too much running on hard surfaces, especially when they are puppies.

Because they are smaller dogs with a short, fine coat, French Bulldogs do not release as many dander cells or allergens as larger or hairier dogs.

However, if you have a family member with allergen concerns, it is still good to consult with your family physician.