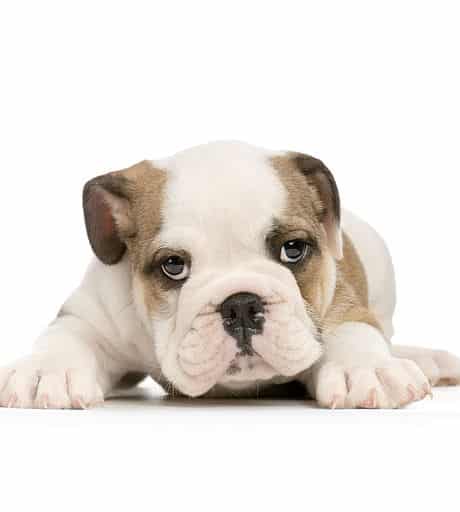 Known as one of the gentlest breeds, the English bulldog has grown in popularity for its intimidating appearance, but affectionate personality.  Our English bulldog puppies for sale are reliable, loving and make excellent companions for children and adults.

Are you looking for a sturdy, muscular dog that loves human interaction and is excellent with children?

Then browse our English Bulldog puppies for sale!

Companion: English Bulldogs are known for their love of humans and their need for human contact and companionship. They will usually get along well with anyone, and they are especially fond of children.

Moderate Energy Level: English Bulldogs are great companions for someone who doesn’t live a very active lifestyle. A 15-minute walk once a day should keep your English Bulldog happy. Never exercise your bulldog in hot conditions because he can overheat easily.

Excellent Watchdog: Bulldogs aren’t barkers, but they are courageous, protective dogs and make excellent watchdogs. They are usually wary of strangers and strange dogs.

Mellow: This tough-looking breed was once a bull-fighter, but is now an easy-going companion. English Bulldogs are known for their gentle, amiable temperament. They are happy to relax and are tolerant of children. Their mellow personality also makes them great pets for older people.

Stubborn: Although the English Bulldog is known for its amiable temperament, they have a stubborn side. English Bulldogs can be difficult to train; however, once they’ve learned something, they’ve got it for good.

When England banned blood sports with animals in 1835, dog fighting became a popular (an illegal) sport. This sport required more agility, and breeders mixed the English Bulldog with types of bull terriers.

Today, the English Bulldog ranks number five out of all dogs registered with AKC.

English Bulldogs are usually 14-15 inches tall at the shoulder and weigh 40-50 pounds.

The typical lifespan of an English Bulldog is 8-10 years.

English Bulldogs have a very distinct appearance! They are stocky, low to the ground, and walk with a bowlegged, rolling gait.

They have a wrinkled face, an underbite, and large, drooping jowls.

English Bulldogs are smooth, short, glossy coats and can have a variety of colors and markings including, fawn, white, red, brindles, and piebald. Some bulldogs have white markings or black masks.

English Bulldogs are relatively easy to keep groomed and clean because of their coat. Brush your English Bulldog several times a week with a soft bristle brush.

English Bulldogs shed seasonally, which means they shed heavier twice a year. You will want to brush them daily during their heavy shedding seasons to remove the loose hair.

All the wrinkles and folds in an English Bulldog’s skin means bacteria can become trapped, leading to skin infections. Wash your Bulldog’s face and wrinkles with a warm cloth. Be sure to dry the inside of the wrinkles too.

Always keep an eye out for signs of skin, ear, and eye irritations on your English Bulldog. Contact your vet if you notice redness, itching, waxy discharge, flakiness, or unusual odors on your Bulldog.

Your English Bulldog will also need its nails trimmed and teeth brushed regularly.

Due to their unique body build and stubby noses, there are a few health concerns that are specific to the Bulldog family.

Brachycephalic Airway Syndrome
First, be on the alert for brachycephalic airway syndrome. The English Bulldog’s compressed nose and airways can make it difficult for them to breathe during exercise, and this is compounded if the dog has an elongated soft palate or a narrow nasal cavity.

Water Safety for your Bulldog
Second, English Bulldogs are not skilled swimmers due to their front-heavy build. They should not be left unattended near bodies of water, swimming pools, or even full bathtubs.

Bloat or Gastric Torsion
English Bulldogs are at high risk for bloat. Bloat, also called gastric dilatation-volvulus or gastric torsion, is a life-threatening condition.
Bloat is when the stomach becomes twisted, and the gases in the stomach are unable to escape. The pressure from these gases affects the blood flow to the heart, and it can be fatal.

Hip and Elbow Dysplasia
Like all dog breeds, English Bulldogs are susceptible to hip and elbow dysplasia, two of the most common health issues among dogs. Hip and elbow dysplasia occurs when the leg or hip becomes weakened, and it can result in arthritis or potential lameness if not addressed.

One of the best ways to prevent this is by keeping your English Bulldog from too much running on hard surfaces, especially when they are puppies.

English Bulldogs are moderate shedders and are not considered an allergen-friendly breed. Allergens can be lowered with regular brushing and bathing.