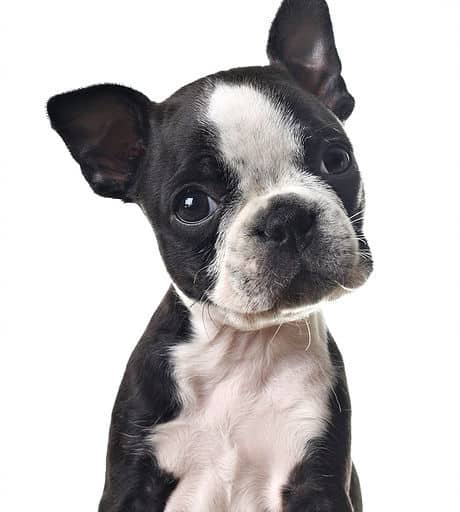 Boston Terrier puppies are smaller dogs that have compact bodies, short tails, and well-balanced bodies.  Known as the ?Little American Gentleman? because of its stylish coat resembling a tuxedo, Bosten Terriers are known as lovers, not fighters.  Our Boston Terrier puppies for sale will make a friendly and enthusiastic addition to your home!

Are you looking for a stylish dog that has a stout body, small to medium size, is friendly, and has a big heart?

If you are looking for this and more in your next dog, then browse our Boston Terrier puppies for sale!

Bred to be a friend and companion, the Boston Terrier is portable, loves people, has a sturdy build, and is always ready for some lively exercise. Its medium-to-small size is perfect for those who have space concerns but don’t want a teacup or toy dog breed.

If you are looking for a smaller, stout dog that loves human interaction and life, then purchase your Boston Terrier puppy today!

And if you want to see more available breeds, then view our full list of puppies for sale here.

Friendly: Boston Terriers love people of any kind. Whether it is an adult or child, owner or stranger, individual or family, this breed was bred to be a human companion and your best friend.

Bright: With a perky and alert personality, Boston Terriers are intelligent and quick to learn. They can adapt to human schedules, and are also known to entertain themselves if left alone for short periods.

Even-tempered: They are known for having an even temperament when interacting with humans. Boston Terriers are known for their gentle attitude that is combined with good sense.

Amusing: Boston Terriers love to play! With a bit of a silly streak in their personality, they are sure to bring smiles, laughter, and life into your home.

Stubborn: While the breed is intelligent and trainable, it is known to have a stubborn streak during the training process. If trained consistently and properly, this trait should not become a big issue with your Boston Terrier.

Named after its origin city of Boston, Massachusetts, the Boston Terrier is one of the few dog breeds with its origin in the United States.

While accounts vary on its exact origin, most agree that the first Boston Terrier was a cross between a Bulldog and the English White Terrier (now extinct) in the late 1800s.

The first Boston Terrier was named Judge, and he was purchased by Robert C. Hooper, who lived in Boston.  Judge was a “strongly built, high stationed dog,” weighing around 32 pounds and looking like a fighter.  He was bred to a small white female, and they had a male puppy Wells Eph.

Wells Eph was used to sire several litters, and it is from this offspring that the Boston Terrier line began to be developed and established.

Originally called Boston Bull Terriers or American Bull Terriers, the name was changed to Boston Terrier and recognized as a breed by the American Kennel Club in 1893.

The Boston Terrier became the first AKC breed recognized as being developed and made in the United States.

Adult Boston Terriers usually range from 15 to 19 inches tall at the shoulder and weigh around 12 to 25 pounds.

Boston Terriers have an average lifespan of 11 to 13 years old.

Boston Terriers have a sleek, fine coat that does shed, but not excessively.  Proper brushing that is performed weekly with a soft-bristle brush will remove most of the hair and keep shedding to a minimum.

They also don’t need to be regularly bathed unless they become dirty or have unnatural odors.

The Boston Terrier breed has been known to have some health issues.

First, it is important to protect their large eyes.  Check them regularly for redness or irritation. Also, watch for dust or debris in the eyes.

Because of their small noses and flat face, some Boston Terriers can develop breathing issues.  Most of these are minor and result in snoring or snuffing.

Like all dog breeds, Boston Terriers are susceptible to hip and elbow dysplasia, two of the most common health issues among dogs.

Because of their lower shedding levels, Boston Terriers do tend to create fewer allergens as a breed.  However, if you have someone in your home with animal allergy concerns, it is still good to use caution and possibly consult the family physician.