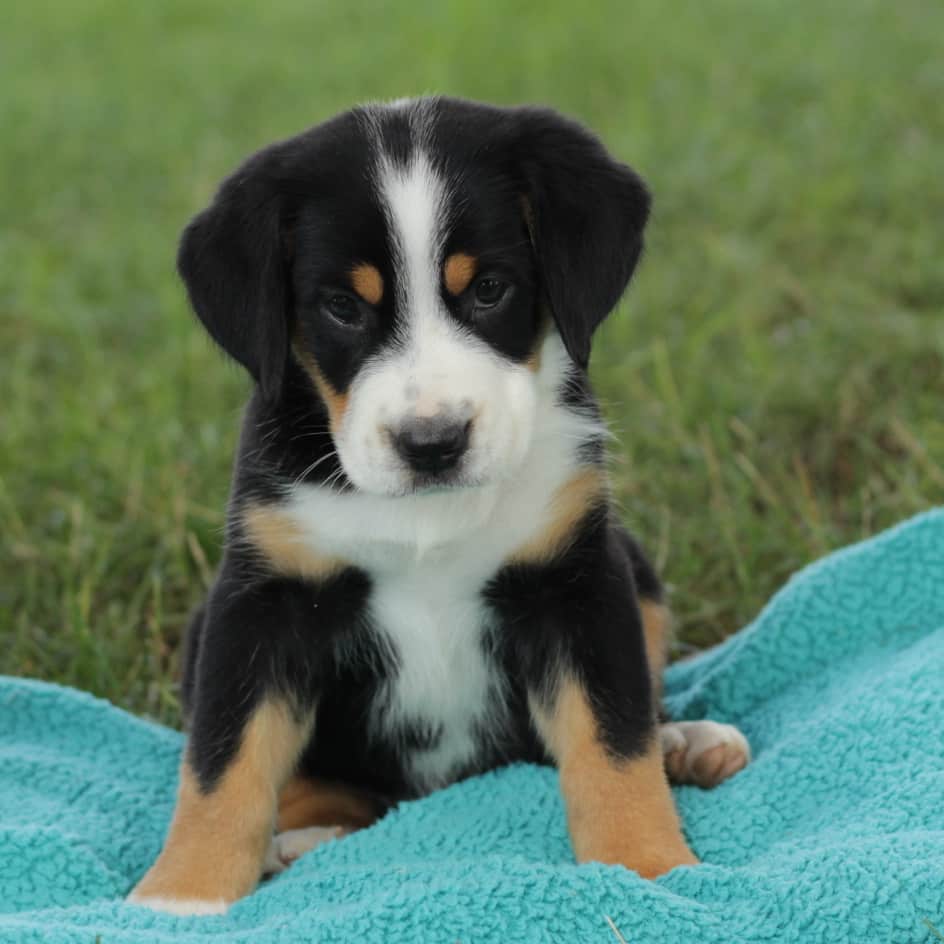 Are you looking for a large dog that loves human companionship, is an alert watchdog, has a big heart, and is not afraid of hard work?

If that describes your ideal dog, then browse our Greater Swiss Mountain Dog puppies for sale below!

Bred to work hard and enjoy humans, Greater Swiss Mountain Dogs is a beautiful, sturdy breed that makes an excellent companion if you have the available room.

If you are looking for a large, beautiful dog with a gentle but alert temperament, then browse our available Greater Swiss Mountain Dog puppies today!

Strong:  Bred to work hard and pull carts, the Greater Swiss Mountain Dog is truly majestic and strong.  With their broad chests, large size, and heavy bodies, they are not afraid of hard work!

Gentle:  Although they are strong, large, and majestic, Greater Swiss Mountain Dogs also have a very kind side, especially with their owners and children.  They have a big heart and enjoy spending time with people they know.

Companion:  The Greater Swiss Mountain Dog breed is known for its love of human companionship.  Even though he is large, his easy-going temperament makes him a good companion for anyone who doesn?t mind the larger size.

Good Watchdog:  Greater Swiss Mountain Dogs make good watchdogs for several reasons.  Not only are they alert to intruders, but their deep, powerful bark combined with their large size makes any intruder think twice before hurting your family or property.

Hard Worker:  The breed was bred and designed to work hard, and they love being given a task and work to do.  They need plenty of exercise to help them stay active and not become too bored, especially if kept in a house or small yard.

As the name indicates, Greater Swiss Mountain Dogs have their origins in the Swiss Mountain region.  It is thought they are descendants of Mastiff-like dogs that Romans would have used during their time of European conquest.

During the centuries, the Swiss continued breeding and using the dog for work in the Swiss mountains.  This included herding animals, watching flocks, and pulling small carts and wagons.

As more people moved off farms and into towns in the late 1800s and early 1900s, the Greater Swiss Mountain Dog breed almost became instinct.

The breed was saved, however, when it was spotted at a dog show in 1908 by Albert Heim, a dog researcher.  He urged that the breed continue, and the Swiss Kennel Club recognized the breed in 1909.

The first Greater Swiss Mountain Dog entered the United States in 1968, and the American Kennel Club recognized the breed in 1995.

The Greater Swiss Mountain Dog is one of the larger dogs.&nbsp; Many adults stand 23-28 inches tall and weigh over 100 pounds, with heavier ones weighing around 150 pounds.

The average lifespan is 8-11 years for the breed.

Greater Swiss Mountain Dogs have a distinct and beautiful coat and face markings.&nbsp; Their head is usually tri-colored, often with varying shades of black, white, and red.

Many of them also have a distinct white mark that runs down their nose.&nbsp; This mark is sometimes referred to as a “blaze.”

The breed has a short, thick double coat that is relatively easy to groom.  They should be groomed regularly, preferably several times a week.

It is not uncommon for Greater Swiss Mountain Dogs to go through regular shedding spells, often during the spring and fall.  During this time, it is critical to groom daily with a shedding brush to keep the loose hair contained.

The Greater Swiss Mountain Dog breed is an overall healthy breed, and there are few diseases or health concerns specific to the breed.

Because of the larger size, it is critical to watch for orthopedic issues that can arise more quickly in larger and heavier dogs.

With their thicker coats and periodic shedding times, Greater Swiss Mountain Dogs are not the most allergy-free dogs around.

Allergens are caused by dander, which is dead skin cells.  Any animal, including humans, shed these dead skills.

Regular brushing and grooming help reduce the allergens from the breed.  If you have a family member with allergen concerns, it is also wise to consult with your family physician.