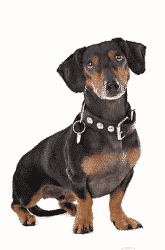 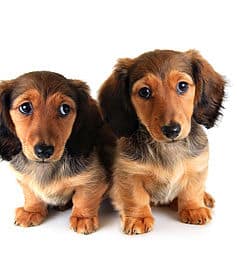 Are you looking for a smaller dog with a friendly personality, a devotion to its owners, a bundle of fun, and an easily-recognized body profile?

If this describes the next family member you want in your home, then browse our Dachshund puppies for sale below!

Known for their long, low bodies and strong legs, Dachshunds were originally bred in Germany to dig into badger holes, but they have since won a place in many family?s hearts.

If you are ready for a devoted companion that doesn’t take a lot of room but still brings a lot of energy and humor into your home, then a Dachshund puppy may be right for you!

Playful: Dachshunds love to play and have fun. No matter the activity you are doing, they are sure to be close by and wanting to enjoy the moment with you.

Brave: They may be small, but nobody told the Dachshund breed that this matters! Bred originally to fight badgers, they aren’t afraid to confront strangers or times of danger. This bravery can become an issue and result in aggressive or brash behavior if not properly trained.

Devoted: Dachshunds quickly develop a secure bond with their owners, especially when they have a small family or single owner. They are known to become jealous if they sense their devotion or time with their owner is being challenged by others.

Determined: With their short, strong body and a high level of intelligence, Dachshunds can be stubborn. They aren’t quick to give up on something they want, and their intelligence allows them to focus on something until they have it.

The Dachshund breed originated in Germany and was bred to dig into badger holes.  In fact, the word ?Dachshund? literally means “badger dog” in German!

It is thought the breed started being bred and used for badgers in the 1300s or 1400s.  Because of the size of a badger hole and the ferocity of badgers, the German people looked for a small dog with the bravery, boldness, and strength to fight a badger in its hole.

As the breed became standardized, it started growing on people’s hearts and was used for more than just badger hunting and other farm work.

By the late 1800s, there were common standards when it came to the breed’s size.

The breed entered the AKC (American Kennel Club) in 1885, and they have been popular ever since.  They hit a significant milestone in the 1950s when they were ranked as one of the most popular breeds.

They did have a dip in popularity during World War I due to their association with the German Republic.  Some took to calling the breed ?Liberty Hounds? during the war and several years after.

The Dachshund is not a large dog and usually stands 8-10? tall at the shoulder as an adult.  Average adult weight has a wide range, varying between 16-32 pounds.

There is a mini breed of Dachshunds called a “tweenie.”  These dogs range from 5-6″ tall and weigh 10-16 pounds on average.

Dachshunds live an average lifespan for a dog with adults living an average of 12-15 years.

The Dachshund is easy to spot because of three primary body features:

The Dachshund’s coat comes in a wide range of colors, including red, black, chocolate, cream, brindle, and more. The coat comes in three styles: smooth, long-haired, or wiry.

The Dachshund coat is typically short and thick, meaning that long hair and shedding are not usually big issues.  However, some Dachshunds have longer or wiry coats, and these will usually require more regular grooming and cleaning.

The coat should be brushed regularly several times a week.  Twice a year, the wire undercoat needs to be “stripped” or removed from their coat.

They don’t need regular baths, usually once every 1-2 months.  If their coat gets dirty, they may need baths more frequently.

Also, because of their shorter legs, make sure to trim their nails every several weeks or more often if necessary.

Because of their unique body shape, several health considerations are critical for Dachshunds, especially with their long torso combined with their short feet:

The breed is also susceptible to bloat, so watch for unusual restlessness, nervous pacing, or other signs of pain and abnormal behavior.

One of the best ways to prevent this is by keeping your dog from too much running on hard surfaces, especially when they are puppies. However, even for adult Dachshunds, take caution in allowing them to run on hard surfaces.

Allergens are caused by dander, which is dead skin cells.  Any animal, including humans, are capable of shedding these dead cells.  While regular grooming and baths help reduce this dander on a Dachshund, it does not entirely remove the problem.

Although some Dachshunds have shorter hair, the breed is not considered to by a low-allergen breed.  Puppies and dogs with long-haired or wiry coats are especially susceptible to causing allergens.

If you have someone in your home with animal allergy concerns, it is good to consult your family physician before buying a Dachshund puppy.