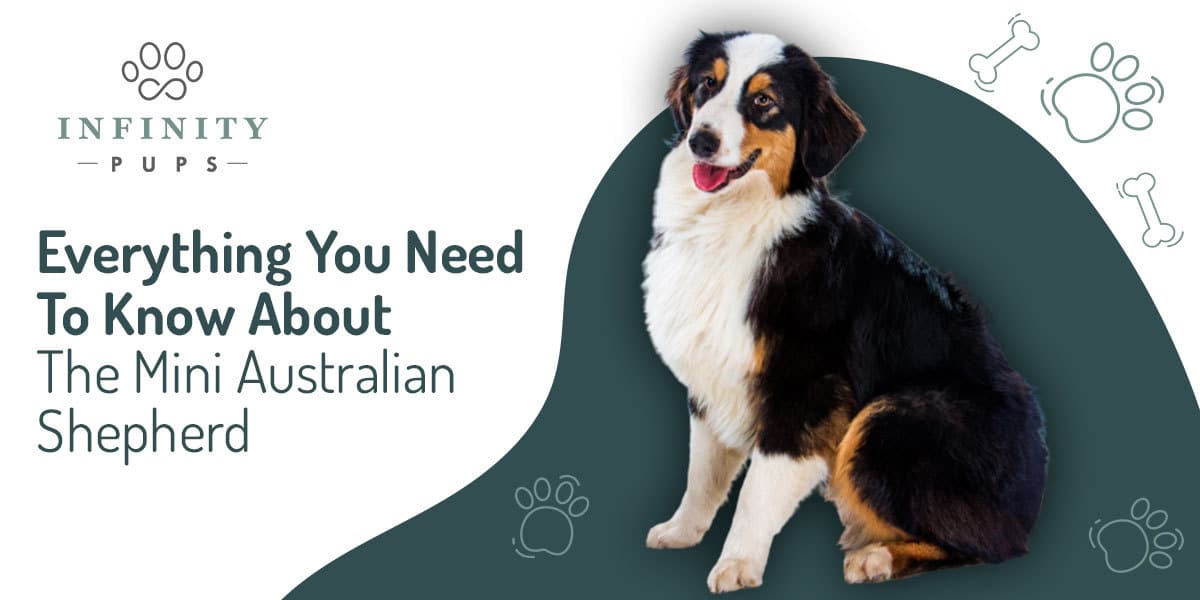 Everything You Need To Know About The Mini Australian Shepherd

When you are trying to pick out a new puppy, the number of options can be overwhelming.

It’s so hard to decide what type of dog is best for you!

Today, Infinity Pups would like to help you out by giving you an honest look at one of our favorite breeds: the Mini Australian Shepherd or Mini Aussie.

Are you ready to find out if this is the breed for you?

Things To Know About Mini Aussies

Here are a few breed features and fun facts:

Contrary to popular belief and the insinuations of the name, Australian Shepherds actually originated from herding breeds in Europe, near the Pyrenees Mountains. From there, they did take a short jaunt to Australia when English immigrants moved there in search of good pasture land for cattle.

When some of these English-gone-Australian ranchers moved to California, their Aussies sailed along with them. In California, American ranchers admired the immigrants' intelligent herding dogs and assumed they were an Australian breed.

These Californian ranchers were always looking for great herding dogs, so they refined the Aussie dog breed into a scrappy, intelligent herding dog that has been a part of Western American culture ever since. Australian Shepherds are still an integral part of rodeos and ranch life today.

The Mini Aussie came into existence in the 1960s, when breeders selectively bred Australian Shepherds to achieve a smaller size. These cute little Aussies became popular with traveling equestrians, and their fame spread across America.

The AKC refused to recognize Mini Aussies as a breed for a while. Then in 2015, the AKC agreed to add them to their ranks of dog breeds if the name was changed from Australian Shepherd to American Shepherd, as some Aussie breeders objected to a direct association between the old breed and the new. Miniature American Shepherd is the name you can register these dogs under today.

Mini Aussies are filled to the brim with personality for such a little package!

Here are a few standout traits Mini Aussies tend to exhibit. Whether you regard each one as a positive or negative trait depends on what you want in a dog.

To understand the Mini Aussie temperament, you must remember that they are herding dogs at heart. Herding instincts typically come with several “side effects,” including a loyal, protective nature, a work ethic, and possibly a wariness of strangers.

Mini Aussies may exhibit herding behavior such as small nips and barks toward children, other pets, small livestock, or anything else they think needs herding. You may have to teach them that herding humans is not acceptable.

Because of their herding instincts, Mini Aussies tend to be intensely loyal toward their families.

They bond closely with their owners and love spending time with them whenever possible.

Mini Aussies have impressive IQs–and that kind of intelligence is both a privilege and a curse for their owners. On one hand, Mini Aussies can quickly learn almost anything you want to teach them, and they can make exceptional companions, therapy dogs, or competitors in various competitions.

On the other hand, they may channel that intelligence into sneaky, destructive behavior if left to themselves. Mini Aussies are certainly smart enough to hoodwink their owners if they aren’t properly looked after.

As a herding breed with plenty of energy and intelligence, Mini Aussies thrive best when they have work to do. They like to have a task, and if they don’t receive one, they may invent their own. And that could include herding the neighbor’s children, destroying your home decor, or escaping from your backyard.

Mini Aussies can be apartment dogs, but it certainly helps to have at least a small yard where they can run off some of their energy. If their energy is not absorbed through healthy exercise, it may become pent up and result in negative behaviors such as digging or destructiveness.

Though Mini Aussies have plenty of energy, that doesn’t mean they can’t chill on the couch with you. They are versatile creatures and can enjoy downtime as well as playtime.

Some owners say they have an “off” switch that enables them to go out and play for hours, then come in, turn off their energy, and sit on your lap for a while.

Aussies are alert, vigilant, and loyal. They are sure to notice anything out of the ordinary and let you know at once. They also won’t hesitate to protect their families if needed.

Aussies were bred to be pushy with cattle and other livestock, have the intelligence and drive to make decisions independently, and are pretty confident in themselves. That confident attitude can carry over into the home if you aren’t careful.

Because of this and their high energy and intelligence, a Mini Aussie may not be a wonderful choice for a first-time dog owner.

However, although Aussies have a confident streak, they also have a strong people-pleasing streak, and they love to make their owners proud of them.

Aussies tend to be skittish toward strange people if they are not properly socialized. If this is not dealt with, it can result in sudden biting out of fear.

The best way to ensure you don’t have to deal with this issue is to make sure your Mini Aussie gets lots of experience with strangers and unusual situations at a young age.

Mini Australian Shepherds resemble the striking standard version, only in a smaller size.

Coming in a more manageable size than their standard counterparts, Mini Aussies stand 14-18 inches at the shoulder and weigh 20-40 lbs.

Perhaps the most striking feature of Aussies is their beautiful eyes. They have an impressive range of eye colors:

Aussies have moderately long, fluffy double coats that are straight or slightly wavy. They normally have slight feathering around their legs.

Owning a Mini Aussie is not only a privilege but a responsibility and an investment. Here is an idea of what you can expect in terms of caring for one.

Aussies have thick, fluffy coats–they will need some care. They need weekly brushing sessions to prevent their coats from becoming matted and tangled. They may also need a little selective trimming to keep them looking neat, but it’s not customary to clip them.

These dogs shed year-round and go through periods of heavier shedding in the Spring and Fall.

As an active breed, Aussies need plenty of exercise. You should make sure your dog gets at least 30-60 minutes of vigorous exercise daily. And he probably wouldn’t say no if you could give him more than that.

Your dog would also appreciate a real job he can perform too. 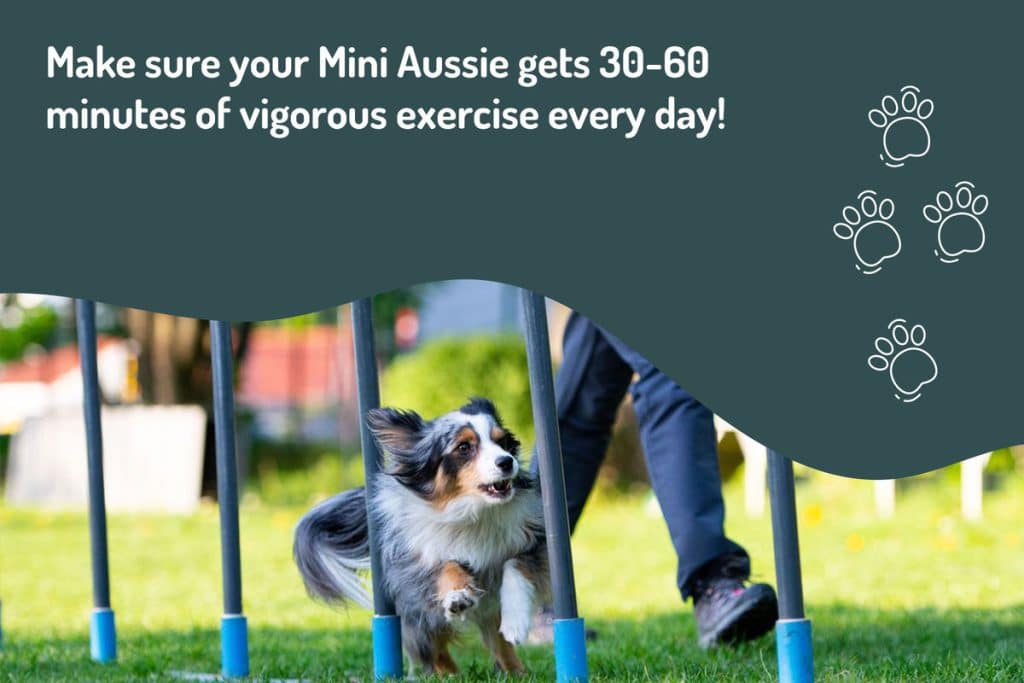 Training a Mini Aussie could be either a dream or a nightmare–you get to choose.

If you start early and put in the necessary time and patience, their energy and intelligence will make them a breeze to train, and they will turn out as wonderful companions.

But if you are lazy about training them and let them form bad habits, they can turn out as wickedly smart whippersnappers who can get away with just about anything.

We recommend you start training as soon as you bring your puppy home and stay consistent and patient. If you put in the necessary effort, your bright, eager-to-please Aussie will thrive.

Here are a few more tips on how to start training your puppy.

Aussies were bred to handle tough conditions and hard work–so they are generally a pretty healthy breed. However, no matter how hardy the breed, all dogs can develop health issues.

Here are a few of the main things you should look out for in your Mini Aussie:

Unfortunately, you cannot always predict whether a puppy will be affected by these disorders. Choosing a careful, conscientious breeder can help ensure you get a healthy puppy.

We have learned a lot about Mini Aussies in this article! Now that we know what they are like, here is our final take on this breed.

Why you would want a Mini Aussie

Mini Aussies are bright, vibrant, and full of potential. They have the smarts to learn whatever you want to teach them and the energy to keep up with you, however active you are.

In short, they are awesome, and they have it all!

If you have the time and energy to help them reach their full potential, you will gain an intelligent, loyal, and 100%, devoted companion.

Why you would NOT want a Mini Aussie

Aussies have it all. They are not simple dogs, and because of this, they require a lot from their owners.

In other words–they have so much potential that they will also be pretty needy and high-maintenance. You cannot purchase a Mini Aussie and then get tired of it and ignore it.

So many Aussies have ended up in dog shelters because their owners did not realize what they were signing up for when they purchased their puppies. We think Mini Aussies are excellent, wonderful dogs, but please be sure you are ready to commit before you buy one.

We hope this article was helpful to you!

If you are in love with Mini Aussies and want to pick one out today, visit Infinity Pups’ website and look at our available Mini Aussie puppies. You could also check out our Standard Aussie puppies or our Aussidoodle puppies.

If you don’t think an Aussie is for you, check out our selection of other breeds.

All of our puppies come from thoroughly vetted, responsible breeders, with a one-year health guarantee.

We wish you and your puppy the best! 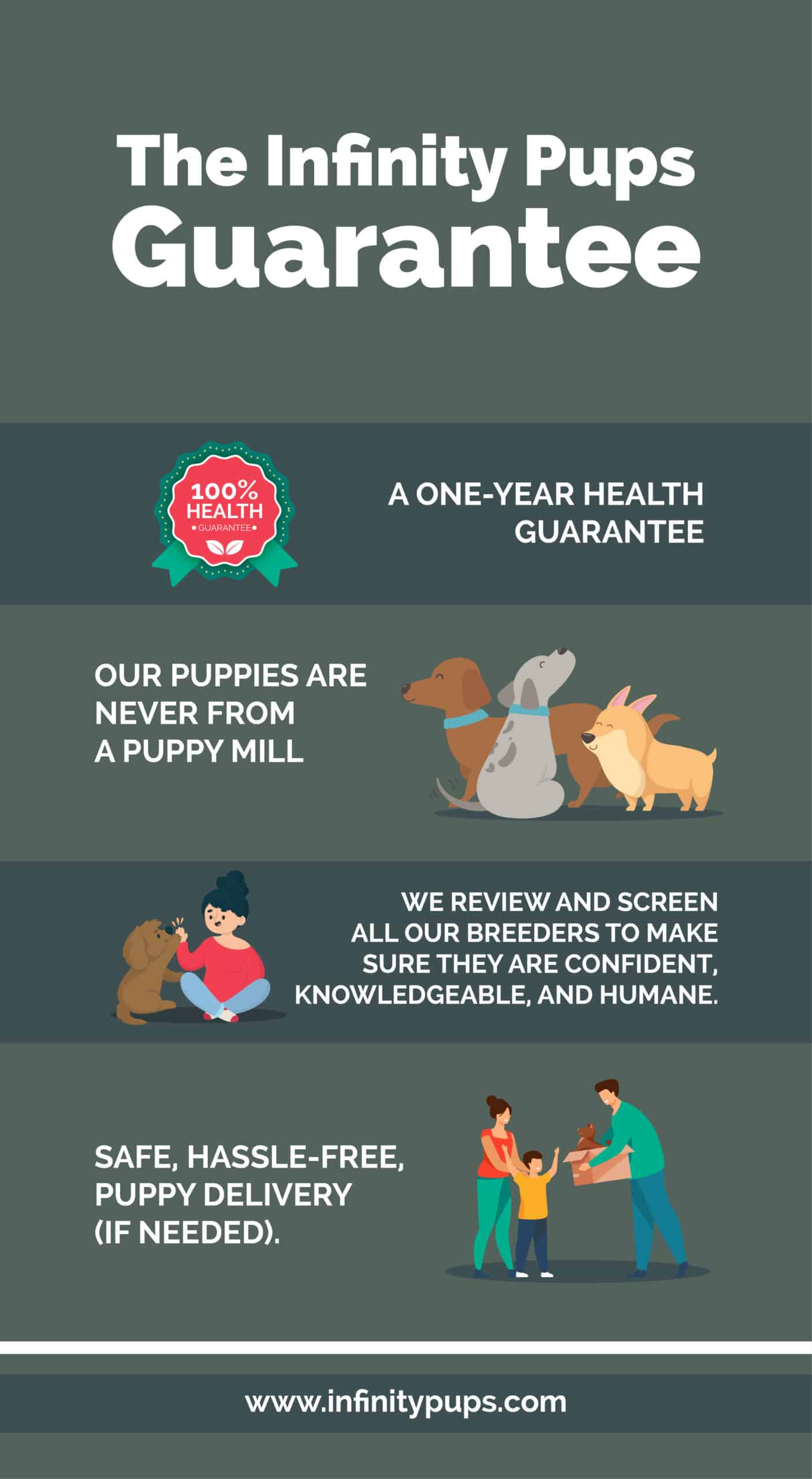