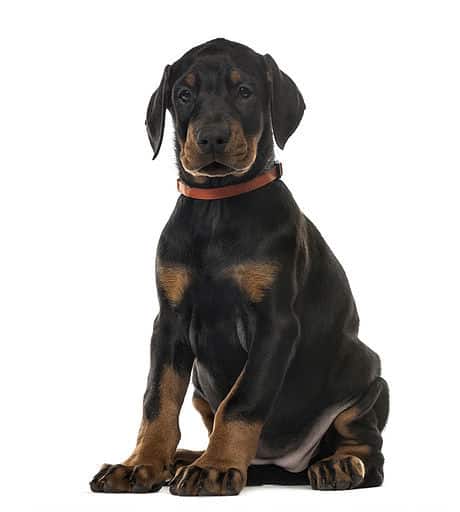 Our Doberman Pinscher puppies for sale make elegant guard dogs as well as loyal companions. Dobermans are highly intelligent and have always worked closely with humans, including military and police work. They are also athletic and excel at agility, tracking, and obedience.

Browse our Doberman Pinscher puppies for sale, and bring home a brave, intelligent, and loyal companion.

Are you looking for a strong, brave, and loyal companion and guardian?

Check out our Doberman Pinscher puppies for sale below!

Intelligent, alert, and highly protective of their family, the Doberman Pinscher is a five-star guard dog. Although they have a reputation of being aggressive, a properly socialized and trained Doberman will not be necessarily aggressive. In fact, Dobermans are loving and loyal family companions!

Adopt your Doberman Pinscher puppy today and enjoy the companionship of this talented, loyal, and elegant breed.

A Loyal Guard Dog: Doberman Pinschers are iconic guard dogs for a reason: They are alert, protective, brave, and loyal. A Doberman won’t hesitate to step in when a family member is threatened.

Intelligent: Dobermans are highly intelligent and have been used in military and police work for decades. They are even included in Dr. Stanley Cohen’s Top Ten Smartest Dog Breeds! Participating in tracking, obedience, and agility are great options for keeping your Doberman’s mind active and happy.

Athletic and energetic: The Doberman Pinscher not only has the build of a sleek, strong athlete but also the energy to match it! Your Doberman will enjoy long walks or hikes with you, as well as free time to play and run outside. It’s a good idea to have a fenced-in yard so they’ll have plenty of options for exercise.

Handsome: Called one of dog kind’s “noblemen” by AKC.org, the Doberman Pinscher is sleek, powerful, and elegant. Dobermans are consistent winners in the show ring.

A Family Companion: The best Dobermans are loyal, obedient, and affectionate family companions. A well-bred and well-socialized Doberman will be protective but not unnecessarily aggressive. Socializing your puppy is essential to prevent them from becoming aggressive. Expose your Doberman Pinscher puppy to a wide variety of situations so it learns what situations are normal and safe. Puppy classes are also an excellent way to socialize your puppy.

Louis Dobermann was a dog breeder and tax collector in 19th century Germany who created the predecessor to the Doberman Pinschers we have today.

In search of a protective companion, Louis began breeding to create a dog that could accompany him when collecting taxes. The breed that Louis created was a predecessor to our modern-day Doberman Pinscher.
When Louis died in 1894, there was no record of the dogs he had used to create the Doberman. It is supposed that Rottweiler, German Pinscher, and Black and Tan Terrier were some of the breeds that Louis used.

German breeders continued Louis’s work. They wanted to create a “super dog”. Choosing only the strongest, smartest, and toughest dogs to breed, the result was temperaments that tended toward stubbornness and aggression.
A man named Otto Goeller continued breeding the Doberman into a more people-friendly breed. In 1900, the Doberman Pinscher was registered with the German Kennel Club.

These brave, loyal dogs have been used as police and military dogs including World War ll and as rescue dogs when the World Trade Center collapsed.

A National War Dog Cemetery in Guam honors the many Doberman Pinschers who served in the Second Battle of Guam in 1944.

Today, the Doberman Pinschers rank number seventeenth out of all breeds registered with AKC.

Male Doberman Pinschers are 26-28 inches tall at the shoulder and weigh 75-100 pounds.

Female Doberman Pinschers are 24-26 inches tall at the shoulder and weigh 60-90 pounds.

Doberman Pinschers have a powerful yet sleek figure. They have a wedge-shaped head with ears that are typically cropped but can also be left to hang down on either side of their face.

They have short, smooth coats. Doberman Pinschers coats are a combination of two colors, with the one color always being rust. They can be black, blue, red, or fawn – paired with rust markings

Doberman Pinschers have sleek, smooth coats that lay close to their skin. A gentle brushing a few times a week will be sufficient for this breed.

They are naturally clean dogs and don’t need frequent bathing.

Be sure to regularly check your Doberman’s ears for ear infections. Ask your vet to show you how to clean your puppy’s ears.

Your Doberman Pinscher will also need its nails trimmed and teeth brushed regularly.

Doberman Pinschers are generally a healthy breed, but it’s essential for any dog owner to be aware of conditions that may affect their dog.

Bloat
Bloat, also called gastric dilatation-volvulus or gastric torsion, can affect any large breed dog and is a life-threatening condition.
Bloat is when the stomach becomes twisted, and the gases in the stomach are unable to escape. The pressure from these gases affects the blood flow to the heart, and it can be fatal.

Other conditions that may affect Doberman Pinschers include:

Protecting Your Doberman Pinscher from Obesity
You can protect your dog from one of the most common health problems: obesity. One of the best ways to extend your dog’s life is by feeding them the correct amount of food and giving them adequate exercise.

Doberman Pinschers are moderate shedders and are not considered an allergen-friendly breed. Allergens can be lowered with regular brushing and bathing.