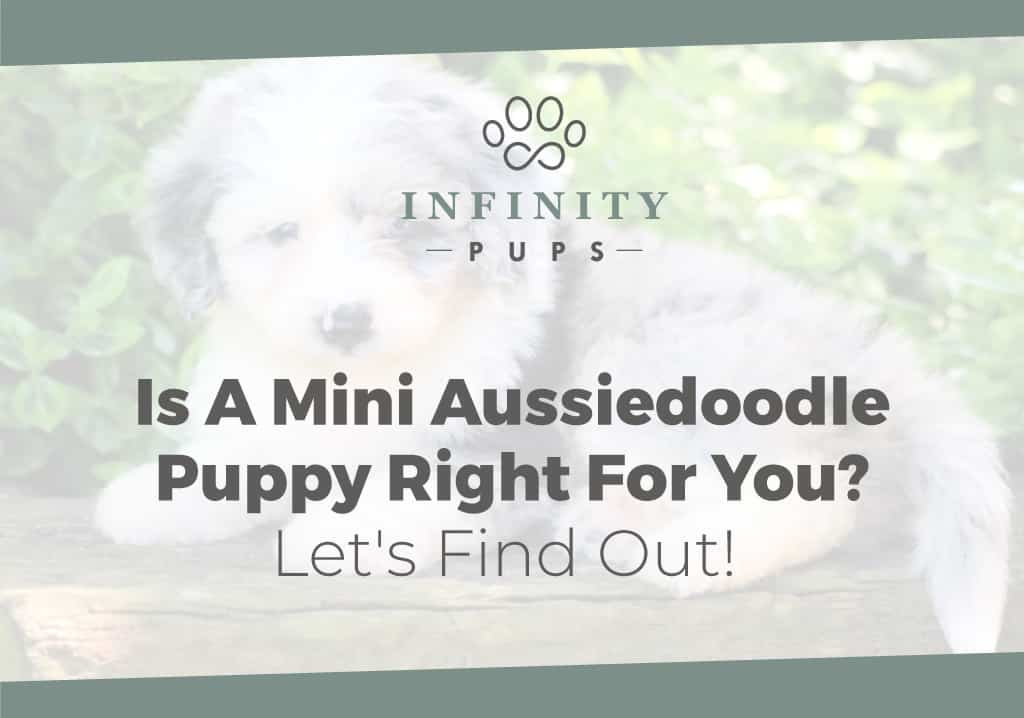 Is A Mini Aussiedoodle Puppy Right For You?

Buying a new puppy is an exciting and rewarding endeavor! You get to choose your puppy, bring it home, and learn all its quirks.

But sometimes, with so many breeds out there, it's hard to know which one would be best for you.

Here at Infinity Pups, we know you want to find the perfect furry friend, and we're here to help! That's why we put together an article covering everything you need to know about Mini Aussiedoodles, so you can figure out if this is the dog breed that's right for you.

Ready to find out? Let’s dive right in!

Since the Mini Aussiedoodle is a mixed breed, if we want to understand the history of this breed, we first have to look at each of its parent breeds: the Miniature Australian Shepherd and the Miniature Poodle. 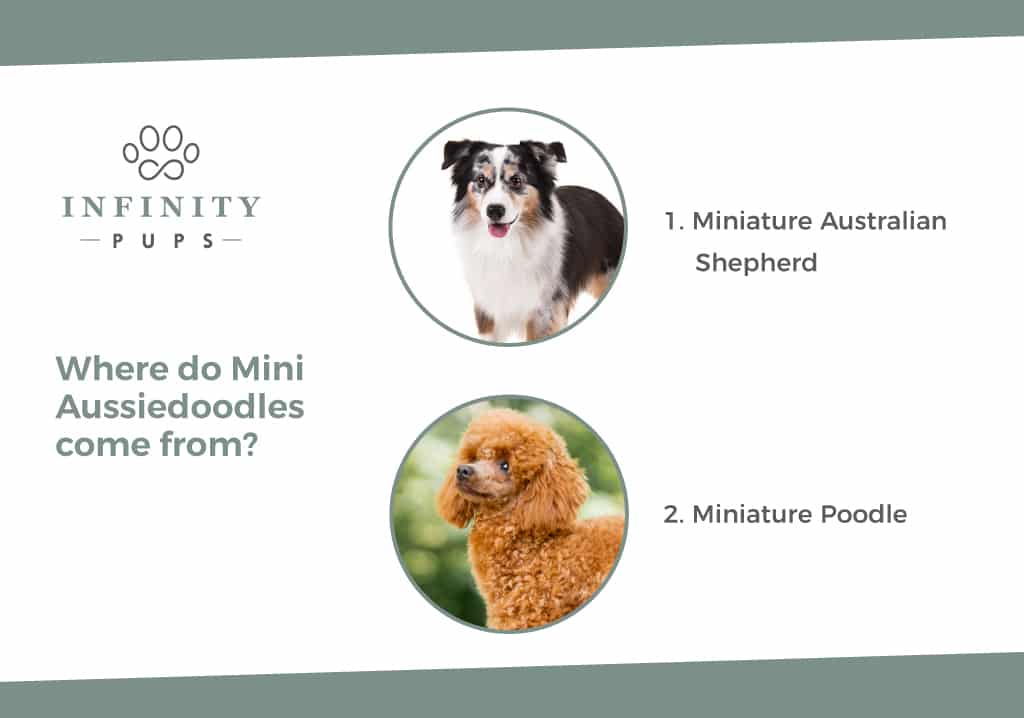 Australian Shepherds are considered some of the smartest dogs of all time.

Aussies descended from European herding dogs that lived around the Pyrenees Mountains. Some of the people of the Pyrenees migrated to Australia in the 1800s, and they took their dogs with them. In Australia, breeders crossed the dogs with Border Collies and other herding dog breeds.

Eventually, these dogs made their way to California, where American ranchers discovered them to be wonderful cattle dogs and refined the breed even further. Aussies became a part of Western American culture as ranch dogs and in rodeos.

Today we know the Aussie as an exuberant, active, and brilliant dog. As herd dogs, they like to work. Pair that with their intelligence and they are prime candidates for dog sports, search and rescue, or service dogs. 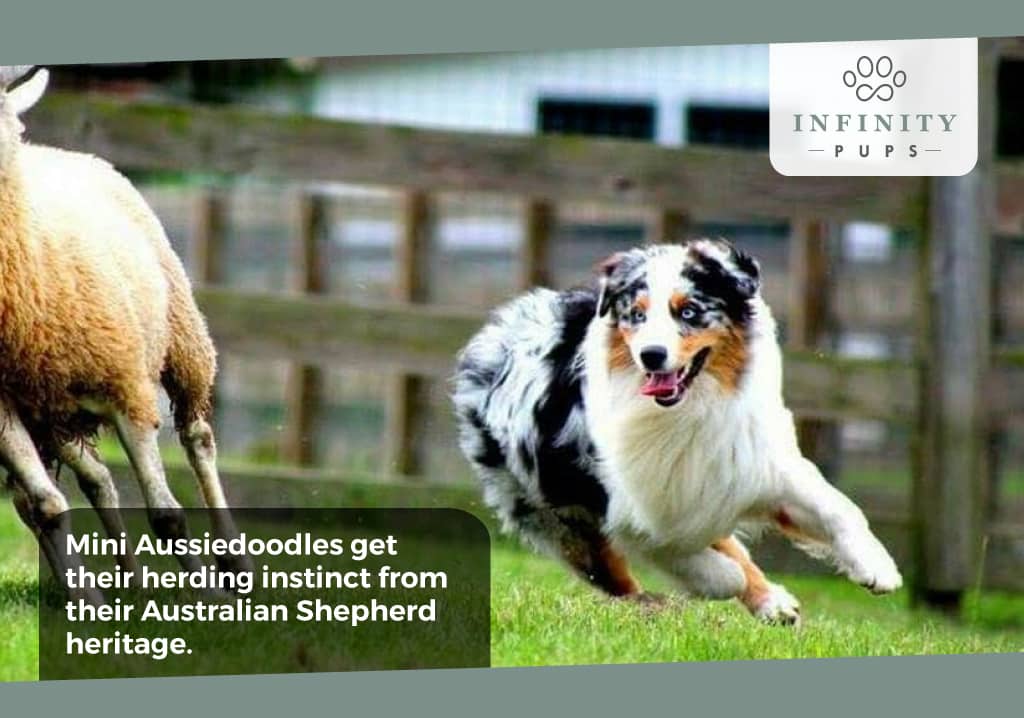 Poodles are also very high on the intelligence scale.

This breed originated in Germany to work as water retrievers. Their thick, fluffy coats were usually clipped to reduce drag but left on their heads and chests for warmth--which is how that iconic poodle clip originated! They were also popular with circuses because of their intelligence, obedience, and good looks.

When French aristocrats became acquainted with Poodles, they adopted them on sight, and Poodles became the national dog of France.

Over the years, Poodles have earned a permanent place among the most popular dog breeds of all time. They are popular for good reason, too! Their attractive qualities include high intelligence, great temperaments, and hypoallergenic characteristics.

Looking at the parent breeds, you can infer that Mini Aussiedoodles will be a highly intelligent breed with a work ethic.

And you would be right! 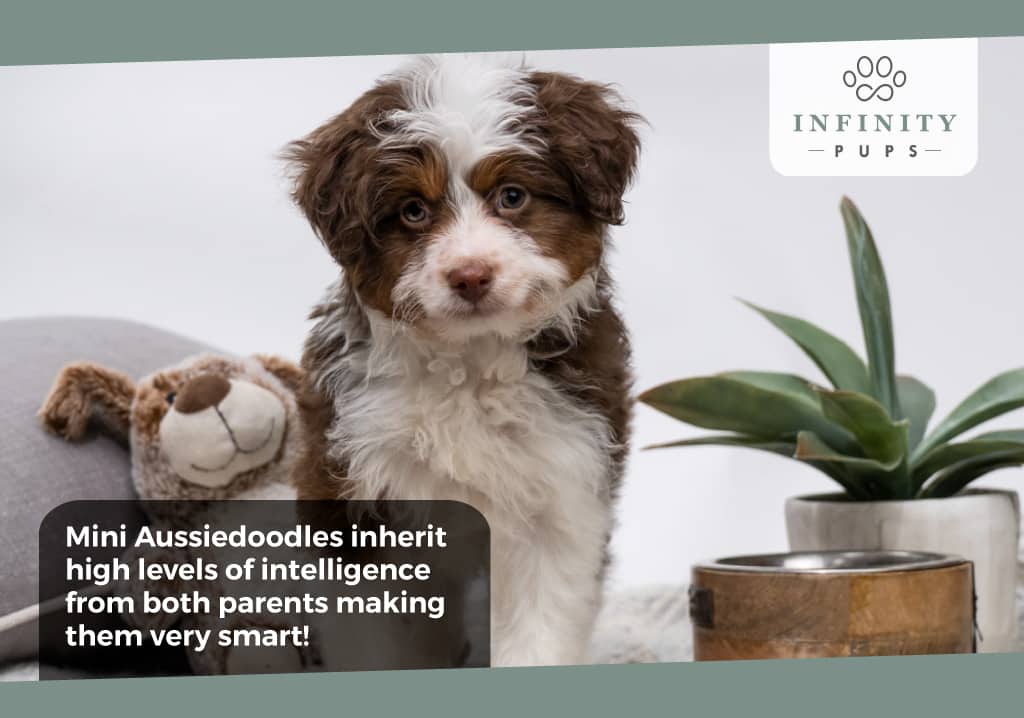 Now that we've looked at the Mini Aussiedoodle's parent breeds, let’s focus on the basic traits of the breed itself.

What kind of behavior can you expect from a Mini Aussiedoodle? Are they energetic? Stubborn? Obedient? Intelligent?

Pros of the Mini Aussiedoodle Temperament 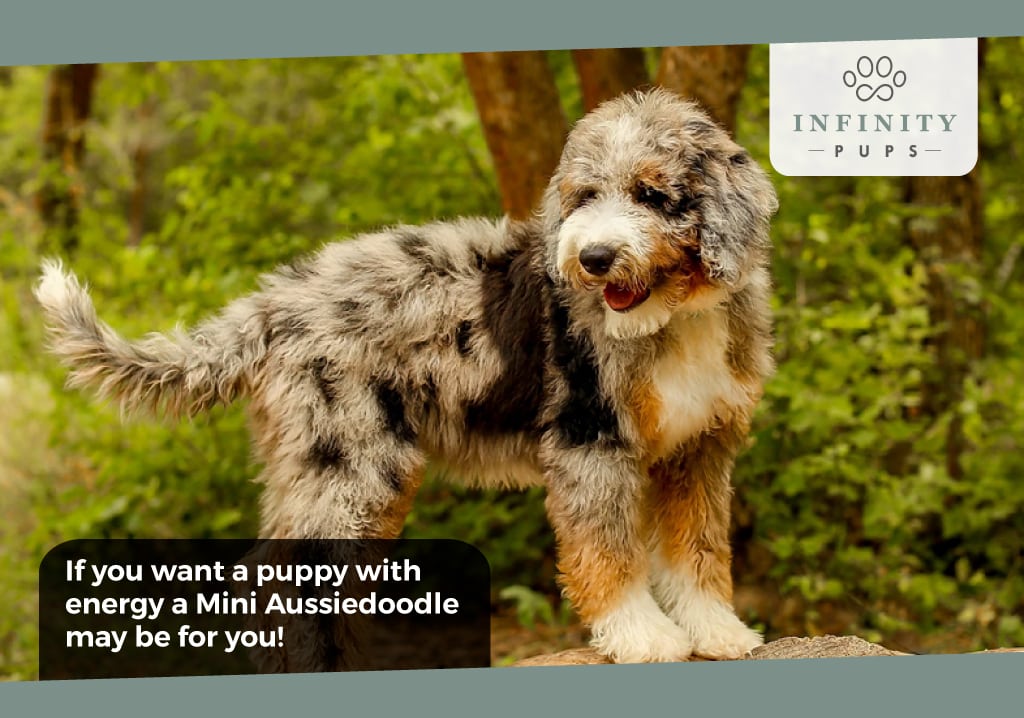 Cons of the Mini Aussiedoodle Temperament 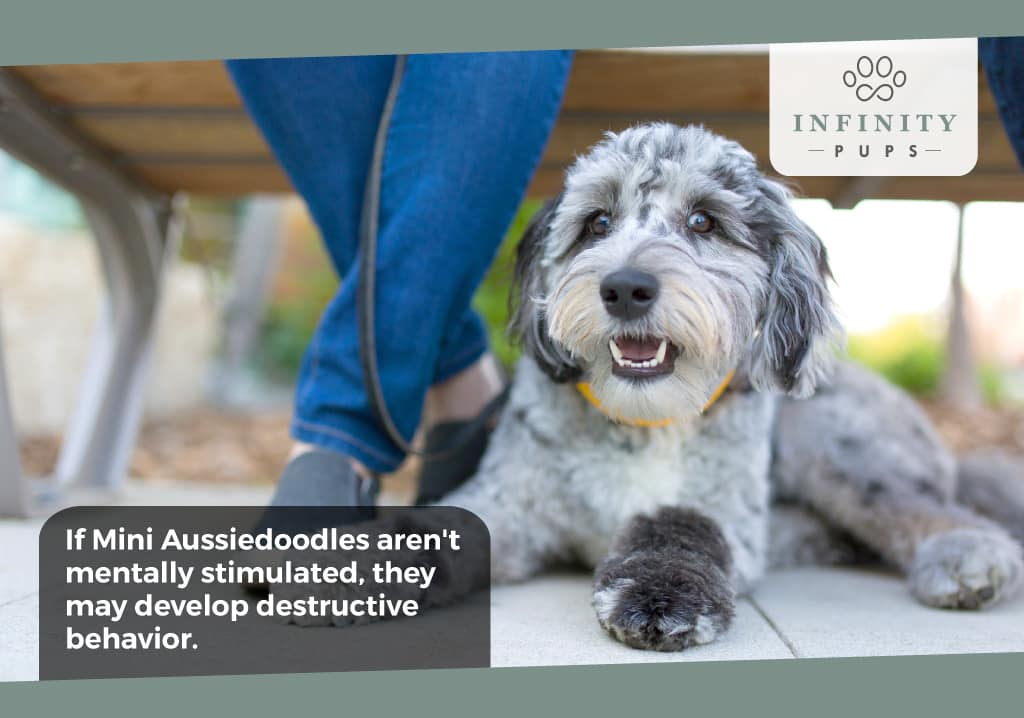 Mini Aussiedoodles have an astounding amount of potential and are full of smarts and zest for life. They will always keep you entertained, won’t run out of energy, and will always love being with you!

But with high potential and talent come high needs. Someone has to channel all that energy and intelligence into good places, and Mini Aussiedoodles are not for the half-hearted dog owner. They will be all in, so they need owners committed to caring for them.

When talking of Mini Aussiedoodle appearance, you have to remember that they are a hybrid breed.

That means that you can never predict exactly what kind of dog you will get. A Mini Aussiedoodle puppy may favor its Poodle parent and have curly hair and chocolate eyes. Or it may look more like its Aussie parent and have a merle coat and blue eyes.

You can be sure your Mini Aussiedoodle puppy will be one of a kind. 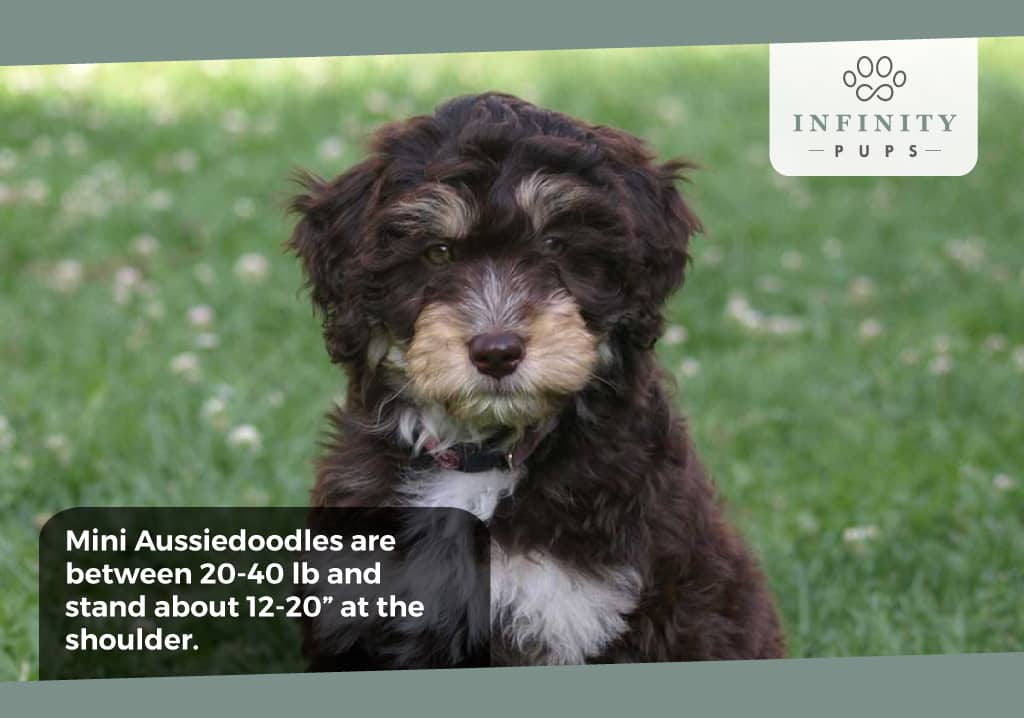 Their coats are usually silky and may be straight, wavy, or curly, depending on their genetics. Possible coat colors may include blue merle, black and red tri, black and tan, red merle, sable, and parti. On rare occasions you may also get a solid color.

Mini Aussiedoodle eye colors include brown, hazel, and green. There is also a possibility that they may have stunning blue eyes like many Australian Shepherds, or even eyes of two different colors. When a dog has two-toned eyes, it is called heterochromia, and it happens when both parents have the heterochromia gene.

What kind of care should you be prepared to give your new Mini Aussiedoodle? Let’s explore the answer to that question next.

First off, you should be prepared to give your Mini Aussiedoodle adequate social interaction and mental stimulation. These smart, social dogs need human attention to thrive. If they don’t get enough stimulation, they will use their active brains to seek their own entertainment, which is often negative and destructive!

Some easy ways to give your puppy attention are:

It helps to keep your Mini Aussiedoodle as an inside dog, so they can be with you all the time and simply soak up your presence.

Your Mini Aussiedoodle loves being with you, but he needs more than just your presence. They have big brains that need active and challenging stimulation. They need to work their brains just as much as their bodies!

Here are a few ways you can give your Mini Aussiedoodle mental stimulation.

Actively stimulating any puppy and keeping him busy is the best way to prevent him from getting naughty, but it is especially important with smart pups like Mini Aussiedoodles.

You will need to give your Mini Aussiedoodle basic dog care, such as cleaning his ears and trimming his nails. He may need a bath now and then, but don't bathe him too often or you'll strip the natural oils from his coat.

Brushing and clipping needs vary since a Mini Aussiedoodle’s coat may favor either parent, ending up curly like a poodle or wavy like an Aussie. Curly dogs may need clipping occasionally. Mini Aussiedoodles don’t tend to shed a lot either way.

If you want a dog who binges Netflix with you, Mini Aussiedoodles are not a great choice. These dogs want some action.

Your Mini Aussiedoodle should have at least an hour of physical exercise per day, at the bare minimum. They will take more if you give it, and you probably won’t tire them out. 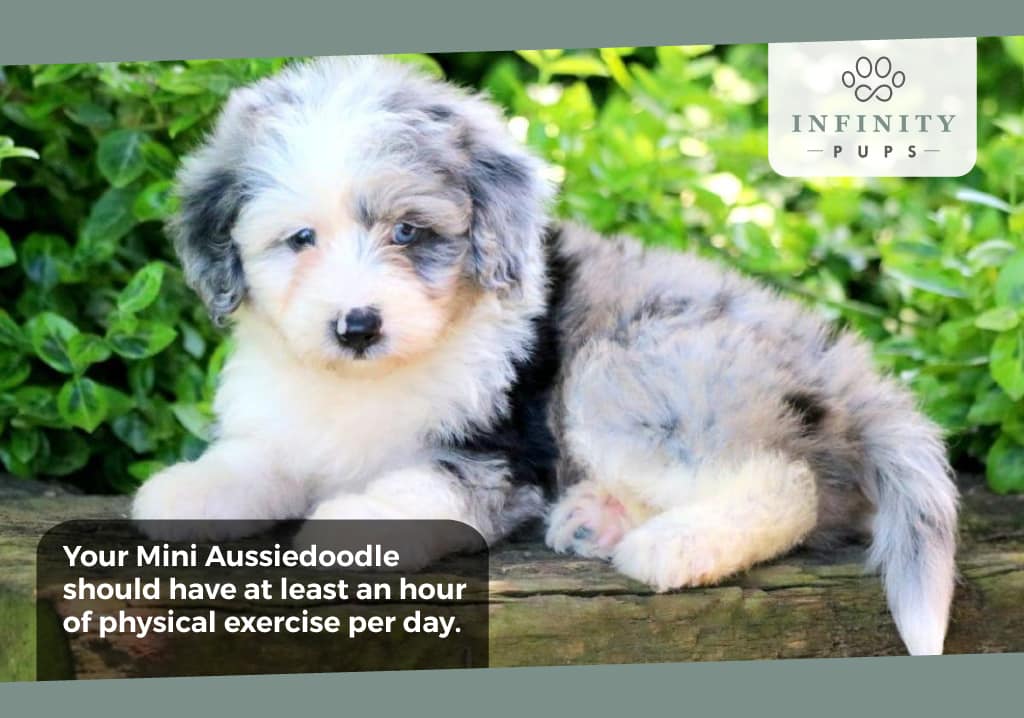 To kill two birds with one stone, combine physical exercise with mental stimulation and do something like agility training with your Mini Aussiedoodle. Agility taxes both mind and body, and Mini Aussiedoodles excel at it and tend to enjoy it.

Mini Aussiedoodles are smart enough to learn anything you want to teach them, given enough time and patience. As always, start training your puppy as soon as you bring them home.

Starting young is always the best policy. If you wait to start training till your puppy is older it will be more headstrong and training will be more difficult.

Mini Aussiedoodles are intelligent and eager to please, so basic training should not be difficult. They respond well to rewards-based training.

Keep this in mind: Mini Aussiedoodles have a lot of smarts and potential. You could positively channel all that into training and a great relationship with your dog, resulting in a dream pet. Or you could ignore your dog and end up with a whipper-snapper smart enough to get away with anything.

You get out whatever you put in!

In general, crossbreeds are hardier than purebreeds. Mini Aussiedoodles inherit that "hybrid vigor" and are generally healthy dogs.

However, there are some things you should watch out for. These include:

Honest breeders should be open about any genetic diseases a puppy may inherit from its parents. 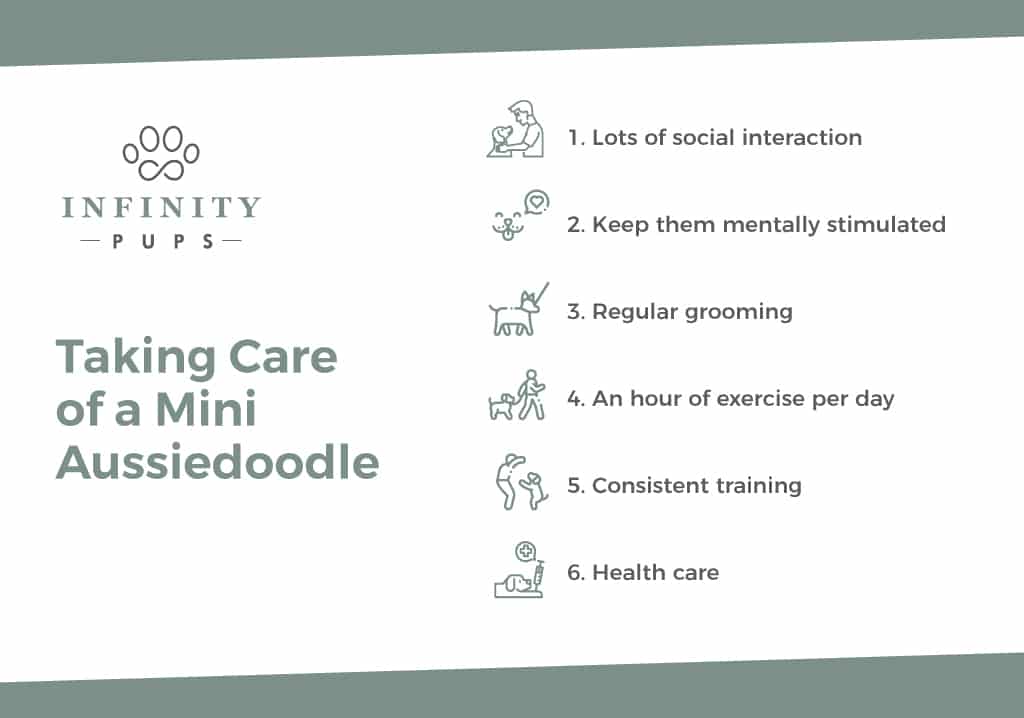 The Bottom Line About Mini Aussiedoodles

Mini Aussiedoodles are packed with intelligence, energy, and potential. They are complex, vibrant, social dogs with IQs that top the charts.

They have an astounding amount of potential! 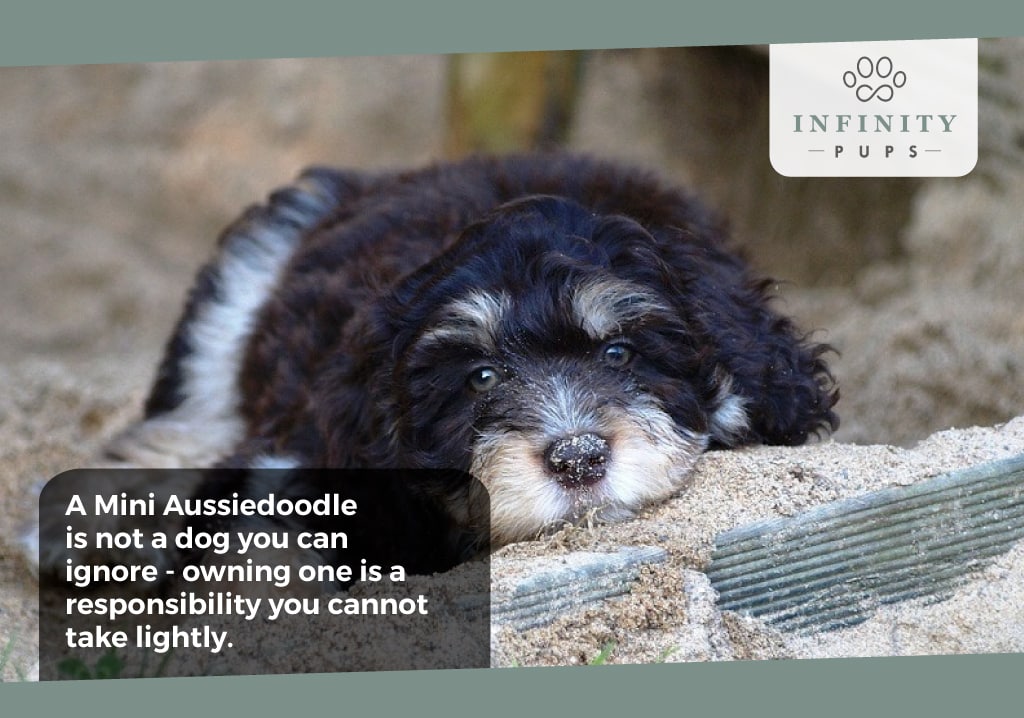 If a Mini Aussiedoodle doesn’t sound like your style, check out our other breeds for sale.

We're also written guides to other dog breeds, so if you don't think a Mini Aussidoodle is a good fit, you may be interested in reading these blog posts:

At Infinity Pups, we strive to offer you healthy puppies that make loving companions for your entire life. To do so, we offer you this guarantee:

Thankfully, working with us is incredibly simple!

We hope you enjoy your new puppy!